(Inside Science TV) – From powering homes, to cars to phones, people across the world use vast amounts of energy. And that consumption is only growing.

As energy needs increase, scientists are constantly on the hunt for new ways to meet the demand. A group of mechanical engineers may have found a new source: the ocean.

“Wave energy has the potential in the U.S. to power 50 million homes," said Marcus Lehmann, a mechanical engineer at the University of California, Berkeley.

So, Lehmann and his team at UC Berkeley have created a device that can capture the power of ocean waves.

Researchers call the device a seafloor "carpet" that would sit on the ocean floor. As the carpet is tossed around by waves, it absorbs their energy and transfers it to pumps beneath it. The collected energy can then be sent to shore and converted to usable power.

“Wave energy in general can be an essential puzzle piece of the mix of renewable energy in the future," said Lehmann.

In tests, the "wave carpet" absorbed 90 percent of the energy from waves in a tank. Solar panels, by comparison, can only capture about 20 percent of the sun's energy. About 500 feet of the seafloor carpet developed at UC Berkeley would be capable of generating the same amount of energy obtained from an entire soccer field that was covered with solar panels.

The carpet would also remain unaffected by boats and storms because of its position at the bottom of the sea.

“Our system is not as strongly affected by storms as other technologies, because most other wave energy technologies are on the ocean surface," explained Lehmann. 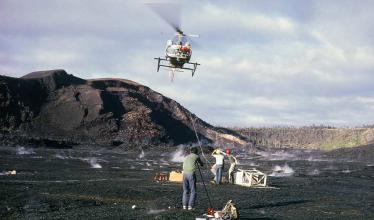