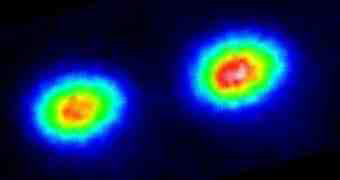 A pair of trapped beryllium ions.

(Inside Science) -- The 2012 Nobel Prize in physics has been jointly awarded to French physicist Serge Haroche of the Collège de France and the École Normale Supérieure in Paris and American physicist David J. Wineland of the National Institute of Standards and Technology and the University of Colorado, Boulder in the U.S. "for ground-breaking experimental methods that enable measuring and manipulation of individual quantum systems."

Through experiments on individual photons (particles of light), and electrically charged atoms (ions), Haroche and Wineland have demonstrated and studied the strange and counterintuitive nature of quantum physics, which could potentially lead to super-accurate clocks and be used for tasks such as quantum computing that cannot be achieved with conventional technology.

"I'm delighted. People I know and admire [are] being recognized for doing nice work," said Gerald Gabrielse, Leverett Professor of Physics at Harvard, who has done related experiments on single electrons. "It's really beautiful to see the way quantum mechanics has been probed and to explore what the limits are."

Quantum physics, introduced over a century ago, predicts many bizarre effects that run counter to everyday experience, yet they have often been very hard to observe in the lab. While pitchers can throw baseballs at a continuous range of energies, from soft tosses up to 100 mph, subatomic particles such as electrons in atoms cannot smoothly move from lower to higher energies, but must jump from one energy level to another, like a painter climbing rungs of a ladder. The "quantized" energy levels are the first unusual aspect of the quantum world.

A second unusual aspect of the quantum world is the notion that particles can be in two energy states at the same time, a phenomenon known as "superposition." In the everyday world, the coin is either heads or tails. In the quantum world, an electron can be in both a lower and higher energy state at the same time until a measurement or other disturbance forces the electron to lose its superposition and assume one state or the other.

These very disturbances make it hard to catch electrons, atoms, and other systems that obey the rules of quantum mechanics in the act. So for many decades, researchers could not fully observe all the strange consequences of quantum behavior. But in the 1970s, physicists began to develop intricate experimental methods for using electric and magnetic fields to trap individual ions. One pioneer was fellow Nobel Laureate Hans Dehmelt, in whose lab Wineland worked in the 1970s, and in 1981, Wineland and his colleagues followed through on this research by trapping a positively charged magnesium ion. Shining light on the trapped ion would cause it to fluoresce, or release light of its own, visible to the naked eye and creating pretty pictures that cameras could capture.

On a parallel track in the 1980s, Haroche and his colleagues explored how the behavior of atoms was altered when moving through an optical or microwave cavity, a pair of closely spaced parallel mirrors in which photons (particles of light) in the visible or microwave range were bouncing around. Like electrons, microwave and optical light fields also jump between ladderlike rungs of energy. The atoms and light fields would exchange energy with each other and influence each other, for example suppressing the release of light by the atoms traveling through, and the atoms would conversely affect the energy states of the microwave light field.

By creating high-quality mirrors made of superconducting material, cooling their setup to less than a degree above absolute zero, and otherwise reducing disturbances created by heat and vibrations, the researchers could make individual photons bounce between two mirrors for remarkably long periods of time, about 130 thousandths of a second when the mirrors were spaced about an inch apart, representing a travel distance of about 25,000 miles. The light disappeared when it finally got absorbed in the mirrors.

Shielded from the disturbances of the outside world, and controlled to a high degree with instruments such as lasers, these setups could probe -- and achieve -- phenomena that were not possible before. Usually measuring particles at the quantum level irrevocably disturbs and alters a particle's state. But Haroche and colleagues performed "quantum non-demolition experiments," in which they determined the properties of the microwave photons repeatedly without disturbing them, by measuring the properties of rubidium atoms passing through the cavity. In the quantum world, it was akin to having a cake and eating it too.

Wineland and company were the first to create "Schrödinger's cat's states" in which their trapped ion would essentially vibrate in a superposition of multiple states at the same time, and effectively be in multiple places at once until measured or otherwise disturbed, akin to the purely hypothetical Schrödinger's cat thought experiment, in which the cat in a closed box would be both alive and dead at the same time based on the status of a poison radioactive atom. By studying when the ions collapsed from multiple to a single state, researchers could study the boundary between the everyday classical world and quantum world, and explore when strange quantum phenomena give way to mundane everyday behavior.

In addition to confirming the predictions of quantum theory, this work has potentially powerful applications, most notably in quantum computing. In traditional computers, the electronic on-off switches known as transistors can be either off or on, representing digital bits of 0 and 1. But in the quantum world, an ion or photon could be in several states at the same time, acting as 0s and 1s simultaneously. Multiple quantum bits, or qubits, could interact with each other to perform massive calculations in parallel, for example, cracking encryption codes in a fraction of the time required by a conventional computer. In the mid-90s, Wineland and colleagues used vibrating trapped ions to create a quantum version of a computing element known as a controlled-NOT gate. In the years since, they created elementary quantum processors with multiple ions able to perform basic calculations. Whether powerful quantum computers can be built depends on whether they can be shielded from the inevitable disturbances that destroy the superpositions and effectively cause quantum computers to crash.

"I would have to say at this point I wouldn't recommend anybody buy stock in a quantum computing company but I think we're optimistic that as the technology improves over the years that this quantum computer really will bring unique capabilities to the computing," Wineland said today at a news conference in Boulder, Colo. "I think maybe in the next decade or so, we'll cross that threshold where we can do problems that are intractable on a classical computer."

The work could also lead to more powerful atomic clocks, which could someday make GPS receivers even more precise. Trapped ions absorb and release electromagnetic radiation such as light and microwaves at extremely precise frequencies, which reflect the distance between wave peaks and could represent ultrafine ticks on a clock. Previous atomic clocks operated in the microwave range, which have lower frequencies, but recent clocks based on trapped ions operate in the optical range, with higher frequencies and essentially more finely spaced ticks for more precise clocks. And Wineland's group has recently introduced "logic clocks," in which pairs of ions are interlinked or "entangled" with each other leading to greater control of the ions and even better measurements of its "ticks."

As has been the case for centuries, building better clocks enables improved navigation.

"We kind of take for granted the navigational advantages a GPS provides," said Wineland. "[P]art of the reason for success of the GPS is that the satellites have on board atomic clocks that were first developed in the lab and gradually … the technology was developed to be able to make them compact."

With precise experimental methods, the researchers have revealed the quantum world, and opened up the everyday world to take advantage of its effects.

"Haroche and Wineland are extraordinary physicists in both technical ability and creative imagination," said Dan Kleppner, an emeritus professor of physics at the Massachusetts Institute of Technology. "Their work can be expected in the long run to have a very great impact."

For purposes of full disclosure, the author previously served as the director of media relations at the National Institute of Standards and Technology from 2007-2011, before joining the Inside Science team last September.

Additional details are available via these resources: