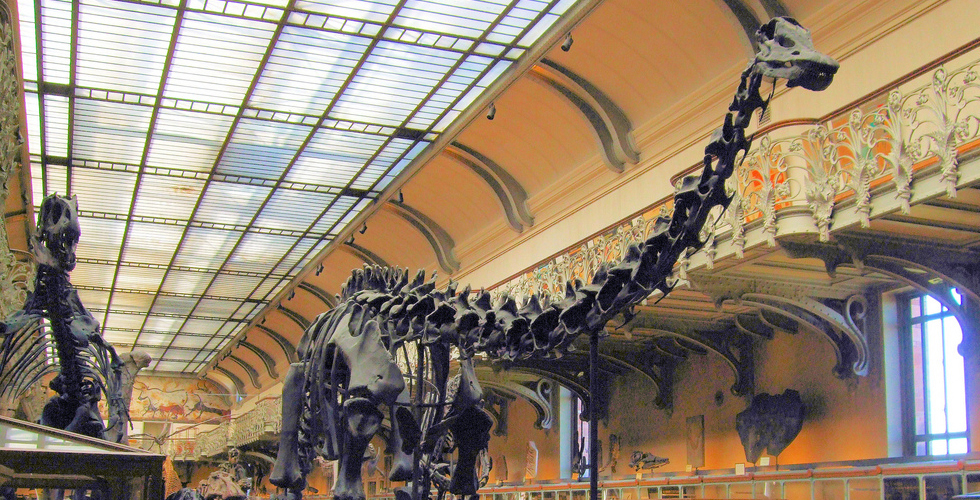 (ISNS) -- In a cinematic showdown from the sixties, King Kong knocks Godzilla out in an underwater battle. But in reality, giant reptiles still trump terrestrial mammals on size.
Large, plant-eating dinosaurs, including one group known as sauropods, were much more common than giant land-based mammals, which were also herbivores. The largest sauropods frequently weighed more than 30 tons and included massive species such as Diplodocus and Apatosaurus. One of the largest known land mammals, an extinct rhino-like herbivore, only grew to approximately one-third that size. A new study now suggests that one reason for this disparity may lie between their bones.
Cartilage — the bendy, supportive material that cushions joints — shapes up differently in mammals and dinosaurs. This difference may be one of the reasons why gigantic terrestrial mammals are so rare. Blue whales, the largest known mammals, would outweigh most sauropods by far. Matthew Bonnan from The Richard Stockton College of New Jersey and his colleagues report on these results in PLOS ONE.
The authors measured the width of the ends of thigh and arm bones in mammals, dinosaurs and their descendants — modern day reptiles and birds — to see how joints changed as the animals’ size increased. These widths, and distances between different points on the ends of bones, helped reconstruct the area of joints between the bones.
As mammals grow larger, their bones become more rounded at the ends. However, bones in dinosaurs, reptiles and birds tend to grow wider, flatter ends as the animals grow in size. And the cartilage within these two differently-shaped joints looks different, too.
“I would have expected a similar pattern in both groups as they got bigger, but you see opposite patterns,” said Bonnan.
He likens cartilage to sheets of rubber stretched across the hard ends of bones to cushion them. As mammalian bones grow rounder at the edges, cartilage stretches thin and tight across their surfaces. The close-fitted, stretchy material transfers weight evenly across the bone surfaces. Dinosaur joints, however, appear to pack in more layers of cartilage as the animals size up.
“More than just evenly distributing the pressure, the joint itself may be deforming a little — it’s actually squishier, increasing the force it can sustain,” said Bonnan.
Predicting the structure of dinosaur cartilage based on the bones on either side is difficult. Many modern-day reptiles and birds have held on to these squishy joints, which lends some weight to the idea.
“Many groups studying cartilage broadly agree that dinosaurs had lots of it around their joints, relative to mammals,” said John Hutchinson, a professor of evolutionary biomechanics at the Royal Veterinary College, University of London, in an email. Scientists already knew dinosaur joints grew and looked different from mammalian joints, but this study drives the point home more strongly than previous work, he said.
Other researchers are not entirely convinced this data sufficiently explains why dinosaurs grew to be giants more often than mammals did. Dinosaurs ranged in size from small to gargantuan; mammals had a more restricted range of sizes. However, at least some mammals and some dinosaurs were approximately equal in size.
“Mammal and dinosaur sizes do overlap, so it’s not clear that there’s a direct mechanical explanation for the differences in the patterns of cartilage that they see,” said Richard Blob, a professor at Clemson University in S.C. who studies evolutionary biology and biomechanics.
Russell Main, a researcher at Purdue University in West Lafayette, Ind. who studies musculoskeletal biology, agrees with Blob.
“The hypothesis about how dinosaurs were able to get so large so much more often than mammals did, and relating that to these differences in bone growth is intriguing,” said Main.
Large joints were not the only reason for dinosaur gigantism, of course. Their lighter, air-sac-filled skeletons probably required less support than solid mammalian bones; having offspring that grew quickly might have helped too.
Their planet — one of large open continents, warm climates and lush vegetation — also gave them ample food and room to grow.

Jyoti Madhusoodanan is a science writer based in San Jose, Calif. She tweets at @smjyoti.