A new way to help those without a voice communicate.
Human
Marsha Lewis, Contributing Producer

(Inside Science TV) -- The world is full of ways to communicate -- from talking in person to talking through a computer. But, despite the multitude of conversational mediums, some people remain unable to communicate.

"If you're not able to communicate to express your needs, it can be very frustrating and maddening," said Pauca.

So, Pauca decided to help his son out. Victor now uses apps developed by Pauca on a mobile device to communicate. With a simple touch of a button, he's got a voice.

For those without the ability to operate a device, Pauca developed a hands-free communication device that uses a sensor to detect simple head movements.

The device has a gyroscope that detects the movement of your head and transmits  this information through Bluetooth technology to an android device at a rate of 100 times a second.

"Giving them the ability to express a need can immediately reduce frustration," said Pauca.

Pauca is now working with patients who have cerebral palsy and amyotrophic lateral sclerosis -- also known as Lou Gehrig's disease. He said that the goal is to make the system smaller by replacing bulky sensors with miniaturized versions that could resemble something like a nicotine patch.

The apps could make communicating easier for millions of people. 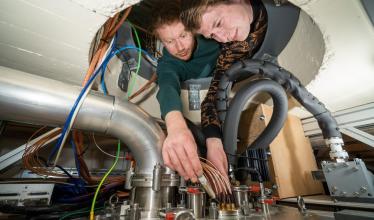