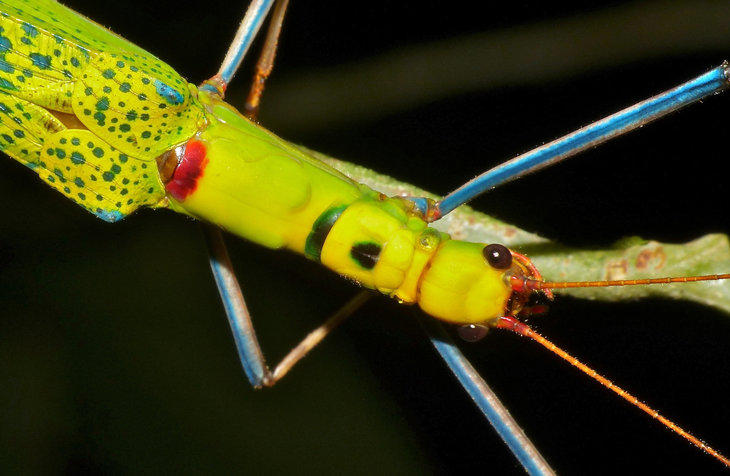 (Inside Science) -- In an effort to improve materials used in aviation and medicine, a team of Irish researchers is studying the legs of certain insects. Some features that appear to contribute to the legs' sturdiness don't actually do so, they found, while others that would be expected to weaken the legs don't have that effect.

These null results provide fresh insight into the surprising ways that nature works. But the new understanding also has the potential to contribute to applications of engineering materials shaped like the insects' legs.

David Taylor's team examined how the insects' legs, which consist of light, thin, tubelike structures of cuticle material, buckle and bend in response to pressure.

"Many materials in nature have evolved to perform some mechanical purpose. So my research group is looking at insects, crabs, plant stems, eggs, etc.," explained Taylor, a professor of mechanical engineering at Trinity College, Dublin.

In addition to studying how the natural materials work, said Taylor, engineers must also be sure they understand how they might fail.

Long, thin-walled tubes tend to maintain strength despite weighing less than other types of structures.

That provides an obvious benefit for designers of aircraft parts and hospital equipment such as catheters. But the tubes' tendency to buckle, in the way that a drinking straw gives when bent, counters that advantage.

Taylor's team set out to understand how differences in the detailed structure of insects' legs influence their buckling behavior. They began with locusts, which are large and easy to work with, before moving on to other largish insects that live different lifestyles, including bees, stick insects and cockroaches.

Those insects not only use their legs in different ways in their natural environments; they also have different leg structures.

"The interesting aspect I found [in the Taylor group's work] was the observation of the different cross-section shapes of the insect legs," said Ahmer Wadee, a professor of nonlinear mechanics at Imperial College, London, who studies why metals and other materials buckle.

Stick insects have five ridges running down their legs. Bees' legs have triangular cross-sections, with one large, flat surface used to carry pollen. And the legs of locusts and cockroaches have almost circular cross-sections.

Taylor and his team obtained their subjects locally. "We buy our locusts from a pet shop where they are normally used as food for the snakes. So we feel they get a slightly nicer and longer life with us," he said. "In our care they live much longer than they normally would, even in the wild. And at the end of our work they are euthanized in a humane way."

To test the buckling behavior of a leg, on a living insect or detached from it, the team fixed one end by putting it in quick-drying polymer cement.

"We held it horizontally and pressed down on the other end using a testing machine which can record the applied force," Taylor noted. "You can do something similar for yourself with a drinking straw or, better still, those tubes of plastic foam that are used to insulate water pipes."

Timing was critical. "We needed to test the legs within a few minutes of cutting them off because they quickly dry out and become more stiff and brittle," Taylor recalled.

The team found that buckling is a complex process that can occur in several different ways. Under a growing force, a leg suddenly becomes unstable, said Taylor, which can quickly lead to deformation and failure. In addition to experiments with the actual legs, they use computer simulations.

The experiments and simulations revealed that two types of buckling occur more or less simultaneously. These are local buckling, which is what happens when you press on the ends of a beer can, and ovalization buckling that occurs when the circular tube becomes oval and bends more easily.

"The ridges running along a stick insect's legs look as if they are there to make the leg stiffer and more resistant to bending; we expected them to make the tubes about two-and-a-half times stronger," Taylor said. "But we found out that they don't; the leg would be just as good without them. So those ridges must have evolved for some other purpose that we don't know about yet."

The team also expected that pollen baskets might make bees' legs weaker and more prone to buckling. "But we found they were just as good as if they had been circular," Taylor said. "This shows that it's possible to design non-circular cross sections that work well."

A related piece of research compared the forces that insects' legs experience with those that predictions indicate will cause the legs to break. Graduate student Eoin Parle found that when locusts jump, their legs experience more than half the failure force.

"That means there is a safety factor of less than two," Taylor said. "That’s much smaller than you will find in most engineering structures."

However, locusts have a safety mechanism, according to recent research by Malcolm Burrows, emeritus professor of biology at the University of Cambridge. "This is a specialized region in the tibia which buckles if the leg over-extends, but which contains the elastic protein resilin that returns the leg to its original shape," Burrows said.

What does the Trinity College team’s research, which it presented at a meeting of the Society for Experimental Biology, suggest for the design of man-made structures?

"We’ve made a small contribution there by showing how certain types of buckling can be predicted using computer programs, and by showing that non-circular cross sections can be effective," Taylor said. "Certainly a possible future application of this knowledge could be in the development of new designs for aircraft and other fields."