If A Dry Tree Pops Sap Bubbles In The Woods 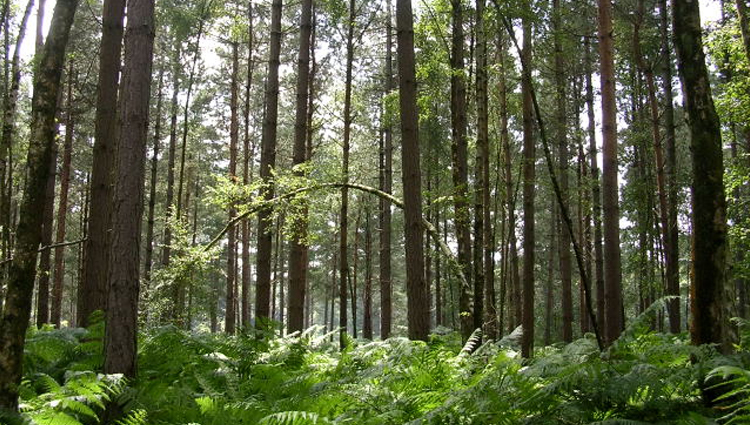 (ISNS) -- The crackling sounds wood makes as it burns are familiar to anyone who has roasted marshmallows before a campfire, but as trees get dry, they mysteriously crackle as well. Now scientists find these noises are apparently due to bubbles that loudly pop into existence within trees. These findings could lead to noninvasive means of testing tree health during droughts.

Just as microscopes and telescopes help researchers see more about the world, microphones can help them learn more about their surroundings via sound. For instance, researchers often stick microphones onto bridges to listen for ultrasonic sounds they make to check if they are in good shape. Such work revealed trees made sounds in both the audible and ultrasonic ranges. These acoustic emissions are very faint, only exerting 10 to 1,000 pascal in pressure — in comparison, atmospheric pressure is about 100,000 pascals, explained physicist Alexandre Ponomarenko at Grenoble University in France.

Ponomarenko and his colleagues are exploring microfluidic technology, which manipulates fluids just as microelectronics control electricity. The aim of such devices is to shrink beakers, flasks and other lab equipment to create microchip-sized labs. As such, they want to learn more about how fluids such as blood or sap move in microscopic channels in animals and plants, channels 100 microns wide — the average width of a human hair — or less.

"The flow of sap in trees is done through a huge amount of vessels of sizes typically 10 to 100 microns in diameter," Ponomarenko said. "Physicists may look at trees as a gigantic microfluidic system transmitting sap."

Past research suggested the sounds from trees might be due to bubbles that form in their sap. Drought causes sap to dry, reducing the pressure that sap exerts in the tree. This negative pressure can make some of the sap go from liquid to gas, much as high temperatures can make liquid water turn into water vapor.

These gas bubbles can obstruct the flow of liquid in plants, significantly disrupting their lives. In addition, as the flow of liquid drops, more bubbles form, leading to potentially disastrous chain reactions. To compensate, plants shut down their stomata, the holes through which gas flows in and out of them.

"That stops evaporation to arrest this chain reaction, but it also stops photosynthesis," said chemical engineer Abraham Stroock at Cornell University in Ithaca, N.Y. "All in all, this is why you don't have to mow the lawn if it doesn't rain — all the plants are protecting themselves and therefore not growing."

However, maybe there are other culprits for sounds from trees instead or as well — for instance, fractures in the wood, or collapse of the channels in which the sap travels. To find out the origins of the sounds trees make, Ponomarenko and his colleagues gathered very thin samples of wood from three-year-old pine and larch trees, slices 50 microns wide, thin enough to see through.

The scientists then placed these samples in a transparent hydrogel, a material akin to ones used to make contact lenses. The gel helped replicate the moisture conditions within trees. As the wood dried, the researchers used microphones to hear what happened and microscopes to see what occurred.

The researchers found bubbles within the sap were linked to about half the sounds from the wood. The bubbles start out very small, on the order of 5 microns in size. However, in about one-hundredth of a second, they grow to fill the sap vessels they are in, which are each about 20 microns wide and 1 millimeter long.

"There are many other bubbles that appear and do not generate any sound," Ponomarenko added. "Our work now is to understand the difference between those two kinds of bubbles — those that make sound and those that don't make sound — and find out what is the origin of the other sounds."

"It's a nice step toward getting a direct view of this important process in woody plants," said Stroock, who did not take part in this research. "The message is that listening to plants can non-invasively yield functional information about their state."

Ultimately, researchers could use microphones to listen to trees to help diagnose when they are dry. "You could also think of a self-running system that would pour water on trees when it measures that the tree is too dry," Ponomarenko said.

Ponomarenko and his colleagues Olivier Vincent and Philippe Marmottant detailed their findings on March 21 at an American Physical Society meeting in Baltimore.