Impact Craters May Have Cradled Life On Early Earth

Craters from asteroid and comet impacts could have protected primitive life.
Image 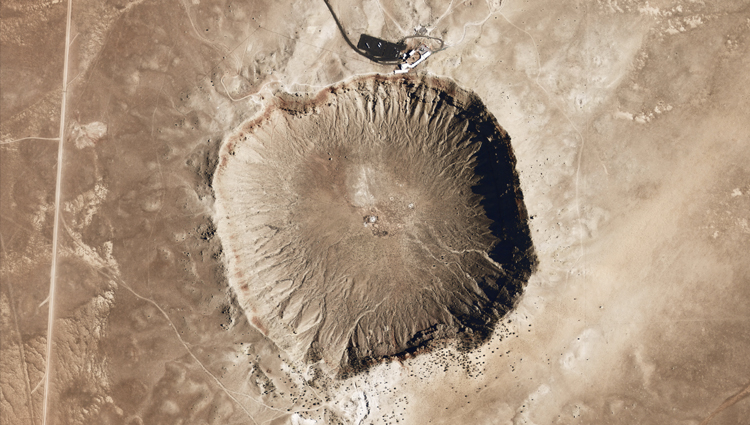 (Inside Science) -- Asteroid and comet impacts could have created refuges for early life on Earth, protecting the first microorganisms from the sun’s harsh rays when the planet still lacked an ozone shield.

"Most people associate impacts with the extinction of the dinosaurs, but they can also be beneficial to life," said Gordon Osinski, a geologist at the University of Western Ontario in London, Canada.

Osinski is a coauthor of a new study, published in the current issue of the journal Astrobiology, that looked at "impact-shocked" rocks from Haughton Crater in Canada, a 14-mile wide depression created by a comet or asteroid crashing into Earth between 23 to 39 million years ago. The team found that, in general, rock samples that were exposed to higher pressures during the impact contained more microscopic pores and harbored higher numbers of photosynthetic cyanobacteria that had evolved to colonize the tiny rock crevices.

"We speculated that this was the case in the past, but we’ve never had the hard data before," Osinski said.

Using a spectrometer, the team also showed that shocked rocks were better at blocking biologically damaging ultraviolet rays while still allowing enough light through to sustain the microbes, which rely on sunlight to survive.

"When you shock the rock, you fracture its crystal structure so that [ultraviolet] light ends up bouncing all around the rock and less of it gets transmitted through the rock," said study first author Alexandra Pontefract, a researcher in Osinski’s lab.

As far as scientists know, impact craters are the only environments that can transform rocks in this way.

"This is a unique process," Osinski said. "Even the most violent volcanic eruptions you can think of don’t come anywhere near generating the pressures that you get during these impact events."

The team’s study of rocks at Haughton Crater revealed that there was a "sweet spot" of impact pressures for creating the most ideal habitats for microorganisms.

"You don’t want the rocks to be completely melted and obliterated, but at the same time, a little bit of shock doesn’t do much either," Osinski said.

While giant asteroid impacts would spell doom for many species today, they may have played an important role in helping jumpstart the first life billions years ago, when life’s toehold on Earth was still very tenuous. Impact sites could have been especially crucial for life during a period about four billion years ago, known as the Late Heavy Bombardment, when the newly-formed Earth was hammered by swarms of asteroids and comets.

Not only would shocked rocks have offered shelter against harmful ultraviolet light at time when Earth still lacked a protective atmosphere, asteroid and comet impacts would have created hydrothermal systems that could have helped sustain life by providing sources of heat, water, and nutrients, Osinski said.

"Because of the huge amount of energy from impacts, you can create kilometers of liquid molten magma that can take a long time to cool down. And these hot rocks can heat up water, and as the water warms and cools, you can get a circulation going," he added.

The ability of impacts to create hydrothermal vent systems is a major reason why scientists scouting out landing sites for the next European Space Agency mission to Mars, in which the search for signs of ancient Martian life is a major goal, are very interested in craters, said John Parnell, a geologist at the University of Aberdeen in Scotland who was not involved in the study.

Parnell said this latest evidence that impact-shocked rocks offer protection against deadly UV exposure is yet another point in favor of investigating Martian craters.

"This is one more reason in a list of many as to why you look at impact craters on Mars for signs of life," Parnell said.