(Inside Science TV) – The Bat House and UF Bat Barn located on the campus of the University of Florida in Gainesville have become home for an estimated 300,000 bats. In these houses, every evening is like Halloween.

As the sun sets the crowds gather to see the current residents because they don't come out during the day.

The excitement is building…

"I heard hawks come down too to try and eat the bats," said Clarisse Rebancos, another on-looker of the nightly event.

The cameras are aimed and ready…and all for the nightly exodus of 300-thousand bats.

"This is home of the world's largest occupied bat house and bat barn," said Paul Ramey, assistant director of marketing and publicity at the Florida Museum of Natural History at the University of Florida.

The video below is an up-close look inside the two bat buildings -- built on the University of Florida campus.

"Just before they start to emerge, the amount of activity increases," said Ramey.

"In the evening it's estimated they consume 2.5 billion, or 25-hundred pounds of insects every night," Ramey said.

"Insect-eating bats can eat over half their body weight in insects a night," said Kelly Speer, a biology graduate of the University of Florida.

But what you don't know about these creatures of the night might surprise you.

"I'm a huge fan of Batman but don't know too much about bats themselves," said Justin Abraham, an on-looker.

"The bats that fly out of the bat house, which is the Mexican free-tailed bats. ""They're not at all related to birds. They're mammals. And some people think they're most closely related to rodents, but actually they're more like deer," said Speer."

How small or large are bats?

"The smallest bat is the bumble bee bat which is about 2 grams. And the largest bat is an old world fruit bat, it weighs 2.5 lbs and it has a wing span of five and half feet," said Speer.

How old is the species?

"They're one of the longest lived mammals for their size. So mammals of similar size normally only live 3-5 years in the wild…but the oldest bat ever caught in the wild was 44 years old," she said.

So a bat living thirty years is like a human living to a hundred. Now, what about all the scary things you hear about bats?

"I think people associate bats with blood feeding and vampires, but they're only three species of blood feeding bats. The rest feed on fruit, nectar, pollen, insects and some even eat fish, frogs and rodents," said Speer.

In fact, bats are actually pollinators and a natural way to control insects.

"Insect-eating bats are saving farmers in southern Texas over a half a million dollars a year and that is by reducing the insect population and reducing the number of insect sprays that farmers have to pay for."

And what about the saying blind as a bat?

"It's actually not true. There are no species of blind bats. They all have eyes. The ones that don't have great eyesight use a special type of sonar called echolocation to visualize their surroundings using sound," said Speer. 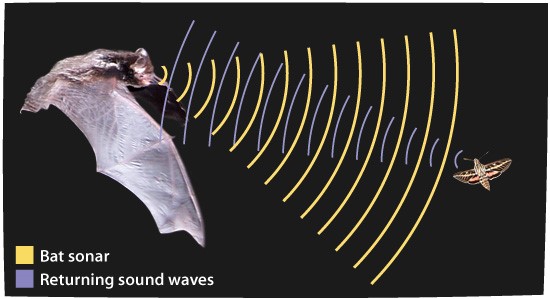 Echolocation works when the bats emit high-pitched "ultrasound" that humans cannot hear. They monitor the sound waves that reflect back with their super-sensitive ears to locate and eat flying insects – but just remember…they won't use it to track you.

Bats are just as afraid of you as you are of them. They're never going to purposely try and hurt you.

You can track the bats and see inside the bat house and barn by logging into flmnh.ufl.edu/bats

Depending on where you live, the best time to see bats is spring through early summer – the days are longer and bats come out sooner after sunset during a longer twilight.