Scientists are using sound to track how sharks migrate and the animals they encounter.
Image 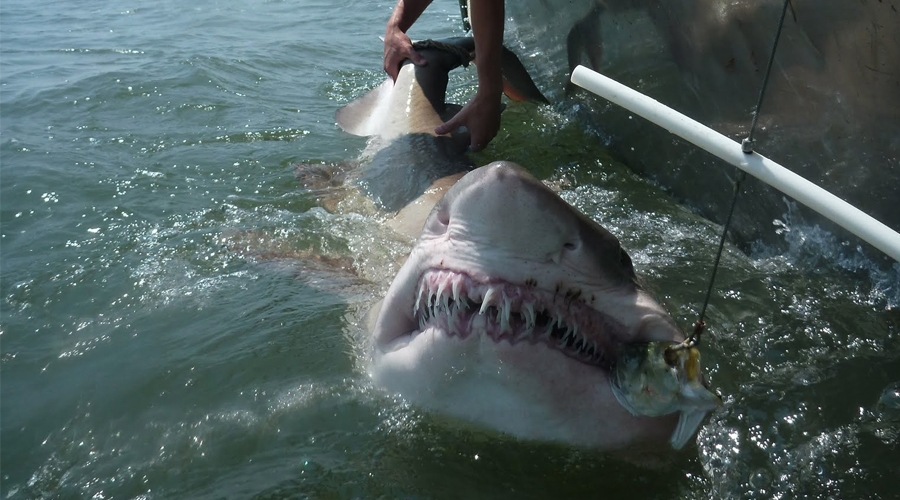 (Inside Science) -- Like tourists, sand tiger sharks return every year to the Delaware Bay, summering in large groups in the shallow coastal waters. But where exactly the sharks go when they leave the Bay on their annual migration south –- and if they split up into smaller groups -- has puzzled scientists for years. Now, researchers are using innovative tracking devices to shed more light on the mysterious creatures.

Sand tiger sharks live in coastal waters off the eastern United States. They are highly migratory, traveling as far south as the Carolinas and Florida during the winter and early spring. As one of the region’s top predators -- they typically eat small schooling fish and are not considered to be aggressive toward humans -- the animals play an integral role in marine food webs.

In recent decades, however, populations have been declining. The species is categorized as vulnerable on the International Union for Conservation of Nature Red List of Threatened Species. It’s now illegal to fish for the sharks in the U.S., but some are still injured or killed when accidently snared by fishing gear.

"We knew what the sharks did in the summer in the Bay, but we really had little idea what happened to them when they left," said Danielle Haulsee, a doctoral student at the University of Delaware in Lewes who presented the research Monday at the 2016 Ocean Sciences Meeting in New Orleans, Louisiana.

To find out, Haulsee and her colleagues implanted acoustic transceivers, which can both transmit and receive acoustic pings, into 20 adult sand tiger sharks in the summer of 2012. They captured the sharks briefly and worked with veterinarians to figure out how to safely tether the device inside the sharks’ bodies, she said. With the tags in place, the animals were released to conduct their annual migration as normal.

"It's a really clever use of technology to study behavior," said Deborah Steinberg, an ecologist from the Virginia Institute of Marine Science in Gloucester Point at the College of William & Mary, who was not involved in the research.

The following summer, with a little bit of luck and lot of fishing, Haulsee and her team managed to recapture two of the tagged animals -- both males -- and retrieve both tracking devices. Their data, which included pings sent by other tagged sharks, revealed that many male and female sharks initially congregated together in the Bay. But as they started their journey south, the animals eventually split up into smaller, male-dominated groups during the migration. The signals from the female sharks largely disappeared, leaving the scientists without much information about how they migrated.

By the time the sharks reached the waters off the coast of Cape Hatteras, North Carolina in December, however, their social network had coalesced again. That could be because the animals were attracted to the region’s many shipwrecks --transformed into artificial reefs teeming with tasty morsels of fish and other animals -- or because the narrowing of the continental shelf and the proximity of warm water in the Gulf Stream had limited their available habitat, Haulsee said.

As spring approached, the sharks continued their southern trek, becoming much more dispersed off the coasts of North and South Carolina. In March, one of the tagged males encountered only two other males. In April, he found none.

"There’s something very different going on during this time of year," Haulsee said.

When the sharks migrate north again, however, the network fuses back together, with both males and females mixing again. By July, the two males from the study had found each other once more in their summer grounds after four months of separation.

Such complex social networks characterized by deliberate decisions to part company and then rejoin are typically associated with higher-order mammalian species like dolphins or elephants. Recent research, however, has found similar behaviors in birds and lizards, Haulsee said.

"It's a fascinating story of social networking," said Fred Whoriskey, executive director of the Ocean Tracking Network, a marine research cooperative based at Dalhousie University in Nova Scotia, Canada, who was not involved in the research.

If researchers are able to recover more tags, he said, they can begin to tease out what's driving the behavior.

"Are the sharks feeding collaboratively -- ganging up on prey too big to bring down alone? Or does being in a group help them find prey faster?" asked Whoriskey. More data could also reveal where the females disappear to, he said, and if they become solitary, too, or stay together.

Ultimately, understanding how and where the sharks move could help scientists determine how to protect them, said Haulsee.