In the 1960s geologists had to throw out their textbooks.
Image

The early Earth, as illustrated by artist Chesley Bonestell

(Inside Science) -- When I was an undergraduate at Emory University in the late 1950s, I took Geology 101. Besides teaching us about rocks and rock formations, it went into the origin of Earth, and how continents were formed. It was taught with all the assurance you get when scientists are positive they know what they are talking about.

Scientific expeditions and advanced technologies less than a decade later turned my expensive text book into a doorstop. The section on the formation of the continents was flat wrong.

Consensus in science is rarely wrong, but it can happen. I'm not talking about wonderfully strange theoretical ideas that come out of advanced physics, but more concrete and relatable ideas that are completely wiped out by a giant breakthrough. There is much more evidence to support human-caused climate change than there ever was for the now-discredited theory on how the continents were formed. Still, wise climatologists -- and scientists in any field, really -- should take note.

Almost every branch of science has been turned on its head at one time or another, undergoing what the philosopher, historian and physicist Thomas Kuhn called a "paradigm shift." Science works like that, Kuhn wrote in his 1962 book, "The Structure of Scientific Revolutions." It's not a bad thing; it means science is self-correcting. What happened in geology in the 1960s was "very Kuhnian," said Eldridge Moores, distinguished professor of geology at the University of California, Davis, who was literally in the room when this particular revolution happened to geology.

Until the 1960s most geologists believed in a contraction theory to explain the world, said Benjamin Jordan, associate professor of physical sciences and oceanography at Brigham Young University-Hawaii. When Earth was formed it was very hot and eventually cooled.

"You have an orange that starts to dry out over time and the surface became wrinkled," said Jordan. "That's what happened with the Earth. But the Earth was also brittle so in addition to wrinkling, forming mountains and valleys, it was also cracking and breaking and creating faults and earthquakes." 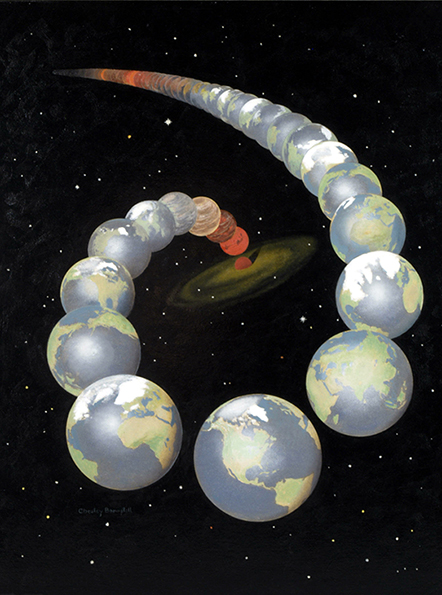 "The Formation of the Earth"

Scientist and writer Isaac Asimov once said that scientific discovery does not start with someone running down the hall shouting "Eureka!" Rather, he said, advances go more like someone saying to himself, "Hmm, that’s odd." Scientific revolutions, on the other hand, involve someone saying to himself, "Gee, I don’t think it really works that way." That scientist, if he or she is challenging the conventional wisdom, is often ignored, vilified, and sometimes driven out of science. And usually he or she is wrong.

Sometimes, however rarely, they are right. Einstein was right about relativity 100 years ago, reassessing the view of nature established by Isaac Newton two-and-a-half centuries earlier; Niels Bohr and others with quantum mechanics upsetting Einstein a few decades later. And there was Darwin.

The man who shifted the geology paradigm was Alfred Wegener and he was never mentioned in my Geology 101 class. How this happened was discussed at a meeting of the Geology Society of America in Baltimore earlier this month.

Wegener was born in Berlin in 1880, the son of an evangelical preacher. He received a doctorate in astronomy in 1905.

He was a bit of a swashbuckler. He and his brother once held the world record for time spent in a hot air balloon — 52 hours. He shifted his interest to meteorology, and went on a two-year expedition with Danish scientists to Greenland, wintering over twice, then returned to Germany to teach.

No one knows how it happened, but likely one day Wegener simply looked at a globe and noted that you could slide South America right up against Africa. The bulge in Brazil near the city of Natal, would fit snugly into the bight of Africa near Cameroon. There are other places in the world like that. The bottom of the Arabian Peninsula, fits right into East Africa around Somalia.

The fits are too good to be coincidental, Wegener thought. He produced maps showing them united.

Now every seven-year-old looking at a globe has noticed the same jigsaw puzzle, but remarkably until the 1960s, scientists did not find that compelling. No one looked and said, "Hmm, that's odd."

Wegener's study was interrupted by World War I. Wounded twice, he spent time in hospitals and thought about the continents again from his bed. When he was released, he wrote a book, The Origin of Continents and Oceans, which was to geology as Darwin’s Origin of Species was to biology. Unlike Darwin, who was an instant phenomenon, Wegener was rejected.

Wegener wrote that every continent once was part of a giant land mass he called Pangea which split into pieces that drifted apart about 150 million years ago. Modern geologists have now dated the beginning of the breakup to about 175 million years ago. Africa and South America were once attached to each other. The continents spread out over the globe to the positions they now occupy. 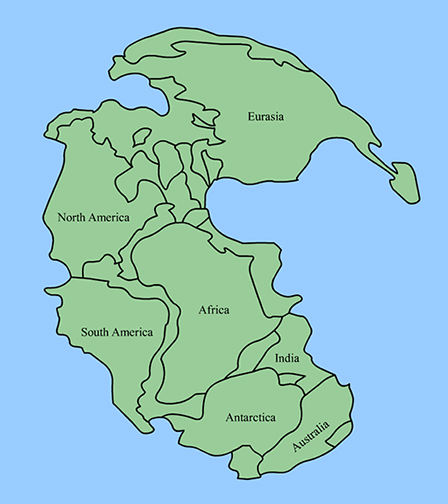 About 175 million years ago the supercontinent Pangea began to break up.

He was not the first to think this. Before the turn of the 20th century, the Austrian geologist Eduard Suess suggested that all the continents were once part of one single mega-continent he named Gondwanaland and they eventually split, perhaps in two and then into the geography we have now.

There was evidence to support this and it wasn’t just geological. Robert Falcon Scott, in his famous Antarctic expedition, found seams of coal and tropical plant fossils at the bottom of the world and no one could explain what they were doing there. Only Australia and the Americas have marsupial animals. Hippos are found only in Africa and the island of Madagascar and hippos can't swim. And so on.

Geologists were sure the interior of the Earth was as solid as steel so the continents couldn't float around. Wegener said, no, it is molten. Something started the continents moving and they split apart. His problem was, said Jordan, that he couldn’t explain the mechanism. And, he was fighting an established consensus.

The battle eventually turned into one between southern geologists, mostly in South Africa, who backed the theory of moving continents and Wegener, and northern geologists who wanted none of it. I was taught at a school in the Northern Hemisphere. Wegener was never mentioned.

Wegener was ostracized and lost several teaching appointments because of his unconventional theory. The eminent British geologist Sir Harold Jeffreys wrote that his theory of drifting continents "is a theory which explains nothing we wish to explain."

He was also hampered by not having a mechanism to explain how continents can move through solid rock, Jordan said.

Jordan said Wegener also was rejected in part because he was a meteorologist, not a geologist, and scientists, like many professionals, can grow unhappy when someone out of their field intrudes. That is still true today.

Wegener never lived to see his redemption. He died of a heart attack at age 50 on the Greenland ice in 1930.

Wegener's theory was not completely correct and missed a lot, but it did explain things worth explaining: how the continents were formed, why there are earthquakes, and how mountains were built.

Redemption came in the 1960s as evidence in support of moving continents grew. People such as Harry Hess of Princeton University and Maurice Ewing of Columbia were mapping the sea floor. Hess, who became the most prominent geologist of the time, had been a submarine captain during World War II. When his sonar was not looking for enemy subs in the Pacific, it was aimed at the sea floor. He began to suspect that what he was seeing matched Wegener's theories.

Moores was a graduate student at Princeton University in New Jersey in December 1959 when a meeting was held on the topic at which S. W. Carey, an Australian geologist and Wegener supporter, spoke about evidence that the magnetic poles wandered. Moores was in the audience.

"Hess bolted up out of his seat," Moores said, "and spent the next hour and a half walking up and down the aisle, chain smoking, never saying anything." A few weeks later, using what he had learned from his submarine and data from the Navy, he began circulating a paper backing Wegener that was published in 1962. It was the tipping point.

A paradigm shifted.  A consensus was wrong.

Expeditions by Ewing and others mapped the mid-Atlantic ocean ridge, the largest geological structure on Earth. Mapping the magnetic properties of the rocks on the ocean floor, seeing how the crust moved out of ridges and down into trenches, was the clincher.

We now know that molten rock flows from the mantle, out to the ocean floor, creating new rock, which pushes slightly older ocean floor away -- as it does along the mid-ocean ridge under the Atlantic. The ocean floor spreads and pushes the Americas away from Europe and Africa. The rock forms plates on which the continents ride, like croutons in pea soup. Some crash into others occasionally causing earthquakes, or under others creating mountains and still more earthquakes. The process is called plate tectonics.

Jordan said that when he was a graduate student, he went up to his professor and asked how geologists explained things like mountains and earthquakes before Wegener and the acceptance of plate tectonics.