Where Did The Universe's Magnetism Come From? 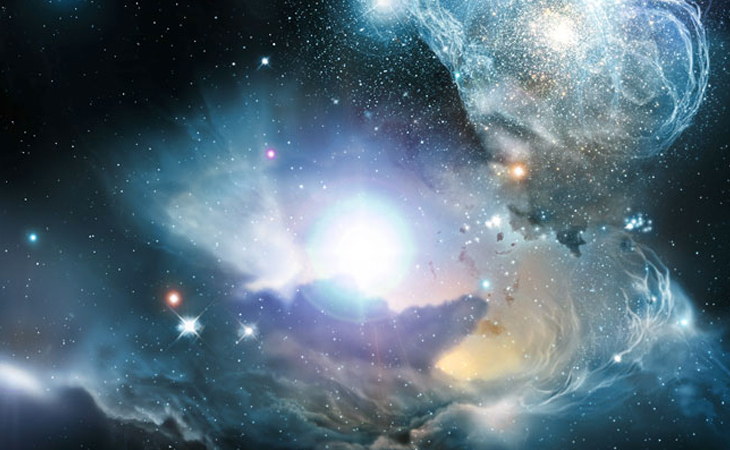 (ISNS) -- In the beginning, there was no magnetism.

Immediately after the Big Bang, the universe contained an awesomely hot cloud of electrically charged protons, electrons, helium and lithium nuclei.  Each could produce magnetic fields in every direction, but these fields completely cancelled out each other in the smooth, uniform gas of the early cosmos.

How the mighty, universe-shaping forces of primordial magnetism emerged always has been something of a mystery, but physicist Reinhard Schlickeiser from the Institute of Theoretical Physics at the Ruhr-Universitat Bochum in Germany thinks he may know the answer.

Out of that hot gas -- which was cooling by expansion -- came atoms. What it did not produce were objects with permanent magnetic fields. They would come later, but Schlickeiser thinks there was an extremely weak form of magnetism, created randomly even before the first stars appeared. These weak fields were later strengthened and stretched by the first stellar winds and exploding stars.

Schlickeiser said that magnetism can be produced naturally by the spin of atoms and subatomic particles. However, strong magnetism would not have happened in the infant universe because it requires heavy elements like nickel or iron that were produced only later inside stars. Producing even heavier magnetic elements, in turn, requires supernovas, the violent destructions of huge stars at the end of their lives.

"You get magnetism any time a charge or current flows; just put a compass near a wire carrying direct current and watch the needle tremble," said Michael Riordan of the University of California, Santa Cruz. "But if you have a lot of charges going every which way, as occurred in the early universe before the plasma [electrically charged gas] cooled out into atoms, the average current flow is zero everywhere, so no net magnetism on any macroscopic scale."

What might have occurred is that as the extraordinary high temperatures of the cloud cooled when the universe was around 380,000 years old, random islands of magnetism formed, produced by variations in density and pressure. Schlickeiser said those weak magnetic fields would be measured at around ten-sixtillionths of a tesla, a unit of magnetism. The average MRI machine in a doctor's office is three teslas.

The magnetism is so small it has no effect on the gas surrounding it, Schlickeiser said. To the contrary, the gas pushed around the weak magnetic fields.

Eventually, the matter in the universe accreted into stars and galaxies. The stars did not need the heavier elements to form, but began producing them as they cooled and collapsed.

If stars are massive enough, they explode at the end of their lifetimes. The outflowing ejecta from the exploding stars compress the surrounding medium, while simultaneously enriching it with the heavier elements. According to Schlickeiser, the combination of stellar wind and the blasts began to push the little magnetic fields round, compressing them, strengthening them, and aligning them in the direction of the wind.

"There is a stream of gas going out, ramming through the medium of the magnetic fields, and supersonic wind flow compresses and orders the field as it flows," Schlickeiser said.

Finally, the magnetic field became strong enough to push the plasma around.

The stars, meanwhile, began creating the heavier elements that produced much stronger magnetism through atomic spin. It is that magnetism that formed the magnetic fields of the Earth-- and it is that field you see in the aurora borealis, better known as the Northern Lights.

The original theory behind this form of random magnetism was worked out by Schlickeiser and Peter Yoon of the Institute of Physical Science and Technology at the University of Maryland. Yoon said that Schlickeiser adapted it to cosmology with this work.

"[Schlickeiser] is proposing this new idea of random magnification through a plasma process," Yoon said, a "seed magnetic field" much stronger than anyone proposed before.

This seed magnification would be amplified and made more coherent by this process.

"You have to have something to start from," Yoon said. "[Schlickeiser] is proposing a mechanism."

The research was recently published in the journal Physical Review Letters.