The lunar surface offers advantages for infrared and radio astronomy, despite the challenges.
Image 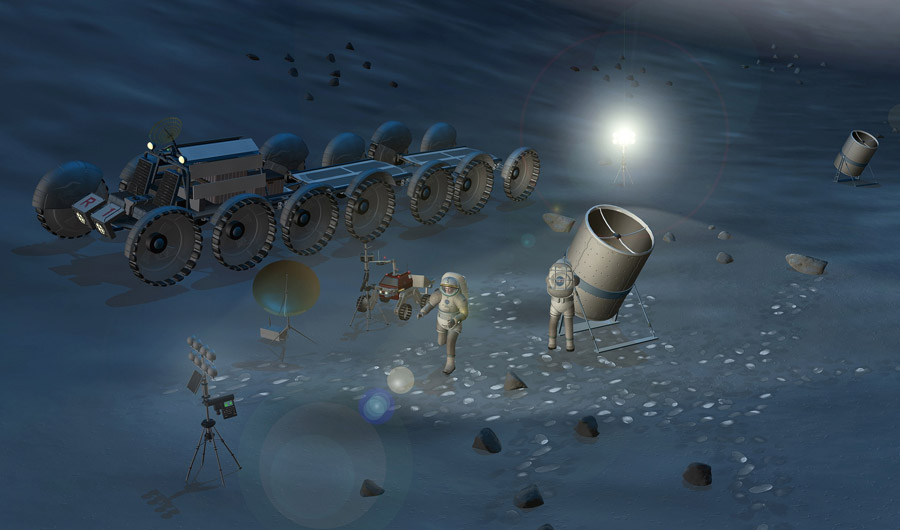 An artist's conception of astronauts setting up a lunar telescope array.

(Inside Science) -- For decades, even before the iconic Hubble telescope took flight, astronomers have been launching spacecraft into orbit in the hopes of avoiding atmospheric effects that blur images taken by telescopes on Earth. But to catch clear signals of some cosmic objects, even those orbits aren’t high enough.

A group of astronomers now make the case for assembling and planting telescopes on the moon. In a series of newly published papers, they argue that our lunar neighbor, especially its far side, makes an excellent place for telescopes in the radio and infrared range. These telescopes could discover and study potentially life-friendly planets outside our solar system and explore the little-understood “dark ages” of the young universe, around a million years after the Big Bang, when the first stars formed.

“This is the time to start discussing projects on the moon. There’s a huge international focus on returning to the moon, and we wanted to make sure that science gets considered as a priority,” said Joseph Silk, a University of Oxford astrophysicist who authored multiple papers in the series.

Astronomers have already built sensitive radio telescopes on Earth, like the Low-Frequency Array (LOFAR) in Europe, but they have limits. The Earth’s upper atmosphere blocks radio signals shorter than 10 megahertz or so, limiting what the telescopes can see, said Jack Burns, a University of Colorado astronomer and director of the Network for Exploration and Space Science. Furthermore, interference from radio signals people use to communicate -- including cellphones, Wi-Fi and satellites -- can increasingly drown out the signals from the cosmos as these technologies become more widespread. Space telescopes can provide major improvements, but even when they’re orbiting hundreds of miles away, they can’t get away from it all. “The far side of the moon is the only place in the inner solar system that is truly radio quiet,” said Burns.

“I spent two years of my Ph.D. developing techniques to get rid of [radio] interference,” said Jake Turner, a Cornell University astronomer who works with LOFAR and other telescopes on the ground. Turner and his colleagues are using radio astronomy to try to detect the radio signals that some planets with magnetic fields emit.

Only some planets have magnetic fields, Turner said, depending on the planet’s internal structure, and their presence or absence could be a major factor determining whether life might flourish there. Many of the planets outside our solar system discovered so far closely orbit red dwarf stars, which often spew huge blobs of charged particles that could erode a planet’s protective atmosphere and harm life forms on the surface. A magnetic field would help deflect such stellar storms and protect the planet’s atmosphere from being stripped away.

Turner has figured out how to detect the magnetic fields of relatively large planets, but those of smaller, Earth-sized worlds, which could be friendly to life, unfortunately emit radio waves too faint with frequencies too short to be seen through the noise in our atmosphere. A telescope placed on the far side of the moon, however, would take advantage of the moon itself, which would shield the telescope from almost all the radio interference from Earth.

That’s the idea behind a proposed mission called FARSIDE that Burns is leading. The plan is for a robotic lunar rover to set up an array of antennas that could scan the entire sky over a range of low radio frequencies. Its main objectives would include identifying life-friendly planets through their magnetic fields as well as monitoring energetic particles released by the host stars. If NASA proceeds with the project, construction of the telescope could begin in the late 2020s and be deployed soon afterward.

FARSIDE would be small and uncomplicated, not like the giant half-kilometer-wide dishes astronomers have built on Earth. But Silk and his colleagues suggest that, further down the road, astronauts might one day assemble a large infrared telescope on the moon. Infrared telescopes must be kept sufficiently cool so that their own infrared heat doesn’t interfere with their operation, and this might be accomplished by locating it in a permanently shadowed site, like in a crater near the moon’s south pole. Such a telescope could be used to spot faint planets and even keep an eye on their weather and seasons.

When it comes to constructing such big lunar telescopes, the instruments and structures fortunately wouldn’t be affected by wind as they are on Earth, and the smaller force of gravity on the moon would help, too, Silk said.

Even if we can’t see the far side of the moon from Earth, astronomers aren’t in the dark about what it looks like: NASA’s Lunar Reconnaissance Orbiter and other spacecraft periodically map out the terrain, making it possible to scope out the best spots for telescopes. Once astronomers pick an ideal landing site, they can then figure out how to transport all the necessary equipment, which needs to neatly fit in a rocket. A robot or astronauts would have to assemble the telescope, and once the instrument is up and running, it would need a satellite to transmit data to scientists on Earth.

There are other challenges to making our lunar neighbor a home for telescopes. “The moon has dust, so it’s a dirty environment, and you’d have to mitigate that. The moon also has some seismic activity, mostly due to impacts from small meteors,” said Marc Postman, an astronomer at the Space Telescope Science Institute. But there are benefits to being on the moon, he said, and if a telescope is near a lunar base, robots or astronauts could repair or upgrade it, when needed.

Martin Elvis, a Harvard astrophysicist who wrote another paper in the series, raises yet another problem. The moon might have the surface area of Africa, but the prime areas that are attractive to astronomers, astronauts and would be moon-miners -- like the Peaks of Eternal Light on the south pole -- are rather small. While the place doesn’t have the cultural significance of Hawaii’s Mauna Kea, it could become just as crowded. “There will be disputes sooner than you think,” he said.

Astronomers like Burns and his team hope to surmount some of these ethical and logistical challenges by working and sharing costs with NASA’s Artemis program, which is planning missions to bring landers, rovers and eventually humans to the moon. A half-century after astronauts first made boot prints on the moon, a new generation could set up camp there, bringing their scopes with them.