If the world can limit future greenhouse gas emissions, scientists are hopeful that adaptations can help a battered industry survive.
Image 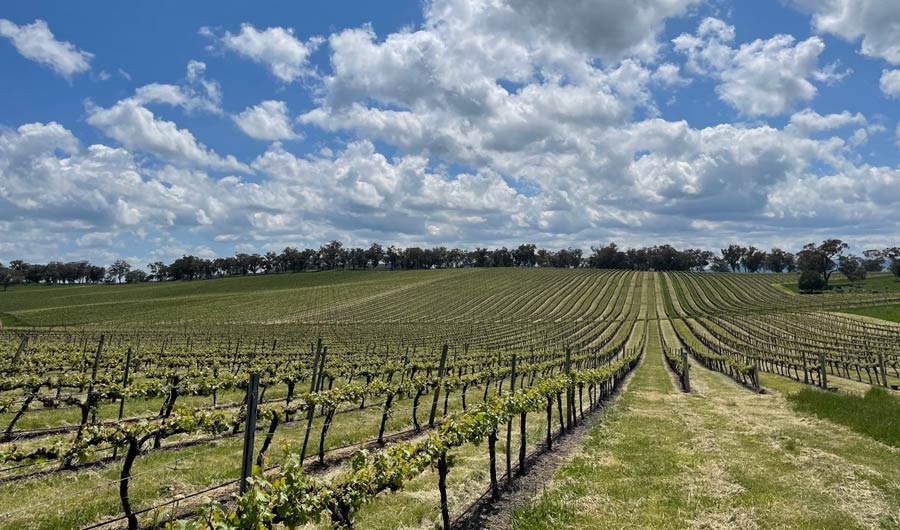 The Angullong vineyard in New South Wales plays host to scientists looking for ways to mitigate the effects of climate change.

(Inside Science) -- It’s a hectic time of year among the wineries of Orange, New South Wales, which are nestled in the fertile foothills of a long-extinct volcano. The southern hemisphere’s summer is about to start after a particularly wet spring, and vineyard owners are hustling to prep their crops before the precious grapes start to sprout.

“It’s a high-pressure time because as soon as you have vines with leaf growth and rainfall, stuff really starts to happen,” said Ben Crossing, the general manager and owner of Angullong Wines. Workers are busy spraying fungicides to kill off any burgeoning infections; mowing the grass between vines to increase airflow; and inspecting the vines to make sure they’re growing properly, all while tending to the important steps of turning last summer’s harvest into wine.

At 470 acres, Angullong is one of Orange’s biggest vineyards, and the rolling hills, flourishing with vines, look exceptionally green. But growers like Crossing expect the heavy precipitation in September and October that fueled this year’s lush growth will be rarer in the future because of climate change. 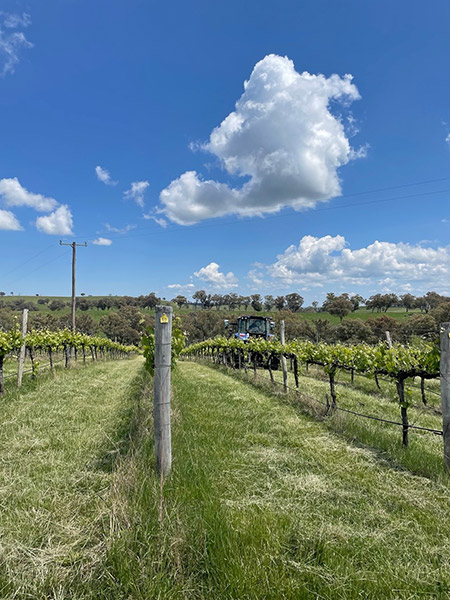 Farmers mow the grass to increase airflow to blow fungal pathogens away from the vines.

The town of Orange and its wine country surroundings are about a four-hour drive inland from Sydney, away from the cool breezes of the Pacific coastline. For the most part, summer is too hot this far from the ocean for wine-grade grapes, but the region’s hills offer a reprieve. Orange is the highest wine region in Australia, with vineyards between 600 meters and one kilometer above sea level. Thanks to this wide range of elevations, almost any type of wine can be made in Orange -- grapes for reds occupy the lower vines while grapes for whites and sparkling wines are found higher up. This makes Orange something of a microcosm of the wider Australian wine industry.

Even with an advantageous microclimate, winemakers here aren’t immune from the stresses that climate change has in store. For years, scientists have been warning that global warming will hit Australia harder than the rest of the world. In addition to reduced rainfall, experts say grape growers in Australia can expect to grapple with rising temperatures, more frequent wildfires and the arrival of new pests. All of which will make the task of producing high-quality wines, for which Orange is celebrated, all the more taxing.

“It’s not just average temperatures rising across the board, it’s the heatwaves that are challenging because they’re hard to predict and eventually you reach temperatures that just burn fruit on the vine,” said Jason Smith, a researcher who studies the cultivation of grapes for winemaking at Charles Sturt University in Orange. “It also comes with fire risks.”

The McArthur Forest Fire Danger Index (FFDI) pools data on various weather conditions to assess the risk of a bushfire happening. By 2050, the daily FFDI value is projected to increase by at least 15%, but possibly by as much as 70%, in southeast Australia where many of the country’s famed wine regions, Orange included, are located.

The 2019-2020 wildfire season was one of Australia’s worst on record; fires burned an area the size of Florida, and so much smoke billowed forth that it crossed the Pacific Ocean, according to one study. Wildfires pose an immediate danger to any vines caught in the path of a blaze, but smoke can also ruin the grapes of vineyards away from the frontline, said Markus Herderich, an analytical chemist at the Australian Wine Research Institute (AWRI).

Volatile, aromatic compounds in smoke called phenols can easily penetrate mature grapes and bind to the fruit’s sugar molecules. “The phenols are then turned into taste compounds,” said Herderich. “You essentially have a smoky time bomb for your wine.” That’s why the AWRI has developed a test to gauge the level of a grape’s smoke taint. Should the fruit be irredeemable, the vineyard owner can at least decide to cut their losses before committing to the expensive wine-making stages. The test could also help winemakers who procure grapes from outside vineyards to screen for smoke damage before buying.

“There are biomarkers in grapes following smoke events,” said Herderich. “We’ve done a lot of work on this, and we now have a good idea of what a clean grape’s chemical profile looks like.”

The risk posed by smoke taint is so great that most Australian grape growers can’t secure insurance to offset the risk, said Crossing. It’s also becoming increasingly tough to find coverage for other extreme events that are expected to worsen with climate change. Crossing, for example, was recently refused insurance for hailstorm damage. Other vineyard owners in Orange, however, are luckier on that front. Justin Jarrett owns See Saw Organic Wines, which unlike Angullong, grows grapes on several different parcels of land dotted around the region. Jarrett still has hail insurance, and he thinks it’s because the insurance brokers assume it’s unlikely that there would be a hailstorm big enough to obliterate all his grapes at once. “It would be extremely stressful to grow the whole season without that cover,” he said. “If you have a storm, it can be 100% of your income gone for some vineyards.”

Yet more and more winemakers like Crossing are having to take on these additional financial risks. It’s one of the reasons that they’re looking to science for help alleviating the burden of climate change.

Both Crossing and Jarrett host researchers at their vineyards. Smith from Charles Sturt University, for example, is placing specially designed water trappers around the stems of young vines on the Angullong estate. The devices are designed to funnel rainfall and irrigated water towards the nascent roots while also reducing evaporation from the soil. 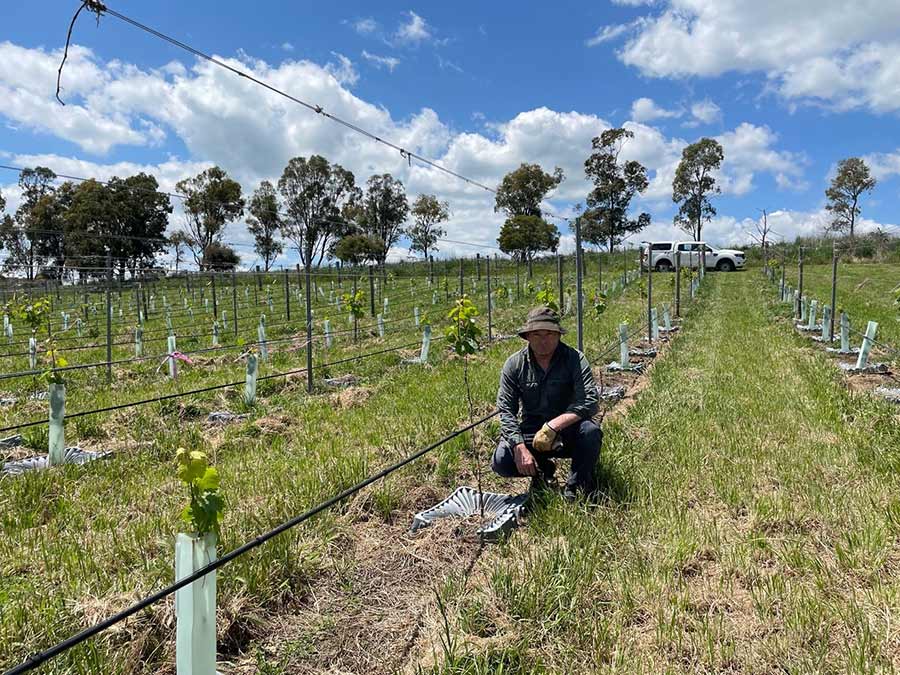 Young vines can find it hard to get enough water with moisture-sucking grass and weeds close by. “If they get a lot of competition, they never seem to recover,” said Smith. With projections of reduced rainfall, scientists hope that interventions like this will enable young vines to continue to properly establish themselves. The water trappers aren’t cheap, though. At approximately $3.70 a piece, they can cost roughly the same as the young saplings themselves, therefore doubling the cost of planting new vines.

That’s why Smith is conducting an experiment to see whether they produce a tangible difference in crop quality. “The cost isn’t negligible and it’s also a lot of plastic to put in the vineyards, so our trial is needed to see whether it’s worth it,” said Smith.

Other researchers, meanwhile, are looking at the changing suite of pathogens and pests that hamper Australia’s vines. “The geographical range of various species will change in response to climate change,” said Geoff Gurr, an ecologist at Charles Sturt University in Orange. Specifically, scientists expect that warmer weather species will migrate from the subtropical regions of Australia down into the winegrowing regions of New South Wales, Victoria and South Australia.

The Queensland fruit fly, which lays its eggs within the fruit, could be one such example. When the eggs hatch, the larvae eat away at the fruit -- destroying the crop. “You don’t get them in Orange historically because it’s too cold, but the warming conditions could allow them to become a seasonal invader or even establish themselves permanently,” said Gurr. “That would be really bad news.”

To combat the threat of pests, Gurr is evaluating the effect of introducing various non-grape plant species between the vine rows of the Angullong and See Saw estates. He’s chosen plants that provide nectar for insects like the trichogramma wasp, which would destroy the eggs of certain pests, controlling their populations. The experiment will run for the next couple of years, by which time Gurr hopes to have figured out the optimum mix of plant species to occupy the mid row.

While climate predictions can make it feel as so though the odds are stacked against Australia’s wine industry, Herderich from the AWRI is confident that partnerships between vineyard owners and scientists will win out in the end. If future global greenhouse gas emissions could at least be limited, then researchers will find ways to help wineries down under continue to thrive, he thinks. “It’s not all doom and gloom,” he said. “It can be managed if we act.” 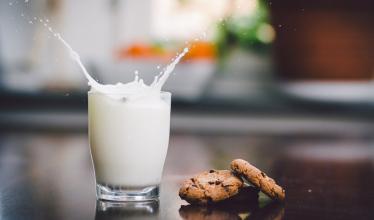