The chimps may be using insects as a kind of medicine.
Image 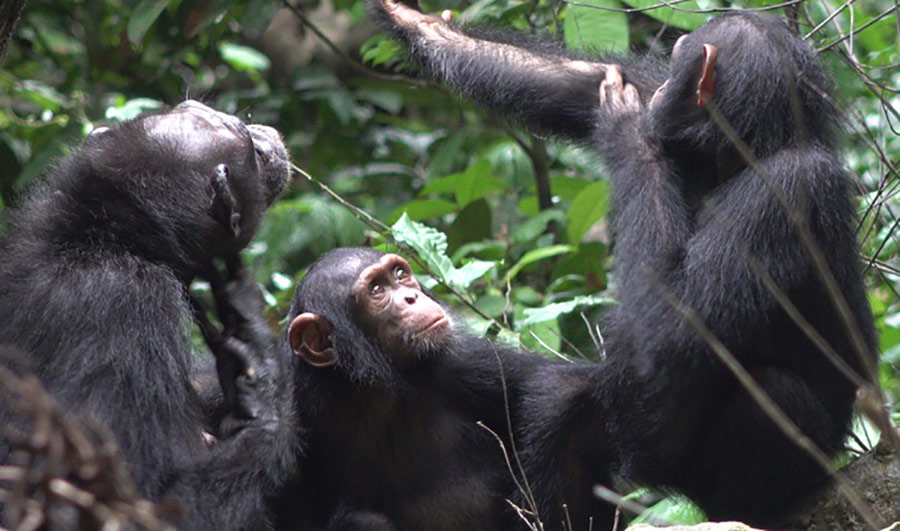 (Inside Science) -- Researchers working at the Ozouga Chimpanzee Project in Gabon have observed chimpanzees applying insects to the wounds of themselves and others, something they say nobody has ever seen before. The observation could be evidence of self-medication in the animals.

The Ozouga project is located in Loango National Park in Gabon, a patchwork of thick forest, savanna, and coast home to a troop of about 45 chimpanzees that scientists have watched and studied for years. But in November 2019, volunteer Alessandra Mascaro saw something nobody with the project had ever seen before.

Mascaro was filming the Ozouga chimpanzees, particularly one named Suzee. As she watched, Suzee approached her adolescent son, Sia, who had an open wound on one of his feet. Suzee looked at the wound then, suddenly, seemed to take something out of her mouth and apply it to the injury. Reviewing the footage later, it seemed to be something Suzee had grabbed from nearby. This was strange and Mascaro showed the video back to the rest of the scientists. The team decided to keep watch and soon saw it happen again with different chimps. Based on the footage, the mystery object seemed to be some sort of small insect.

In fact, over the course of 15 months, they saw this happen a total of 22 times -- 19 with animals tending to their own wounds (often bites from scraps between group members or with outsiders), and three times with one chimp tending to another's. In each, the chimps seemed to start by catching an insect, crushing or holding it between their lips, then rubbing it on the wound, sometimes multiple times. The researchers shared their findings today in the journal Current Biology.

This behavior looked a lot like what scientists call self-medication. Many animals are known to self-medicate. Wild red and green macaws eat clay to help digestion. Pregnant elephants may eat certain leaves to induce delivery. Birds may ward off parasites by weaving herbs (or cigarette butts) into their nests, and orangutans have been seen rubbing an ointment made from leaves and saliva onto their skin. But the Ozouga scientists say nobody's ever seen animals self-medicate with an insect to treat an open wound before.

"It's a really interesting set of observations," said Michael Huffman, a primatologist with Kyoto University in Japan and an expert in animal self-medication. "There's enough observations that they've made to show that it's not a one-off thing." Huffman was not involved in the project, but he was one of the scientists who reviewed the paper during the publication process.

"It's delightful to find something new like this," said Richard Wrangham, a biological anthropologist and primatologist with Harvard University and founder of the Kibale Chimpanzee Project in Uganda. He said he was particularly surprised at the use of insects as well as the episodes of one chimp treating another.

However, there's one big caveat to this whole story: The scientists haven't been able to identify the insects involved. Whatever they are seem very small, maybe only a few millimeters in size, and the chimps don't leave a lot of remains behind.

"Without information about that, we can't begin to look into the possible function of that insect," said Huffman. "That's one thing that's still missing." Also, to definitively prove that this is an act of self-medication, Huffman said, the scientists would need to show that the insects really do have some sort of healing or other positive effect, though doing this in the wild may be difficult.

That said, it's not an outlandish idea that a bug may help the chimps soothe pain or fight off infection. "There are studies showing that, in many insect species, they have substances that help you," said Simone Pika, a cognitive biologist with Osnabrück University in Germany and one of the leaders of the Ozouga project.

Unfortunately, it's not easy to grab a half-chewed insect from a chimpanzee's wound. Instead, Pika says, they've talked to entomologists and come up with a couple of plans for tracking down the insect's identity. One idea is to start by doing an insect inventory for the region -- a kind of lineup of possible suspects -- and then trying to narrow things down from there. Another is to wait to see the wound-tending behavior happen again, and then, once the chimps have left the area, set up a perimeter around the site, "then really turn every leaf to maybe find some of the insect remains," said Pika.

Huffman noted that he wouldn't be surprised if more people started reporting this kind of behavior now that the paper's published. "It is usually the case when someone says, 'This is what I've seen' that everyone says, 'Oh, I've seen the same thing.' And then people will have their radars on to that in the future," he said.

Wrangham, however, suspects that the fact that it hasn't been reported before means it may be unique to Ozouga. "It's probably a specific tradition -- cultural tradition, socially learned tradition -- in this particular population."

Wrangham did note that scientists where he works at the Kibale National Park have spotted chimpanzees dabbing at wounds with leaves, another tradition seemingly unique to just that one area. Though in that case they don't seem to be selecting for a particular species of leaf, just grabbing what's nearby.

And at both sites, scientists have seen one chimp caring for another. How much animals engage in what's called prosocial behavior -- acting to benefit another individual with no benefit to yourself -- is a hotly discussed topic, and the three observations of one Ozouga chimp helping another may become an interesting talking point in that discussion.