Researchers are learning how to cope with the arrival of the sargassum’s “brown tide."
Image 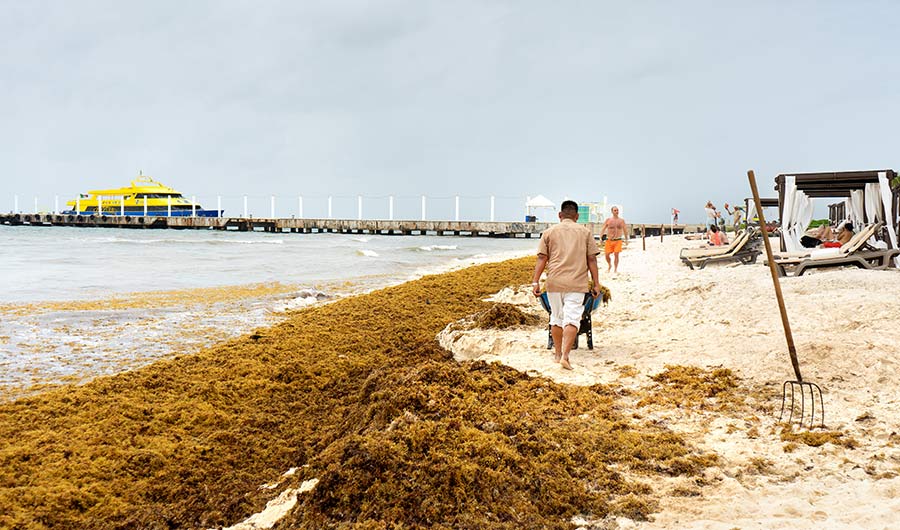 (Inside Science) -- In the summer of 2018, thousands of tons of a prolific seaweed called sargassum invaded the pristine beaches of the Caribbean. In Mexico, the turquoise waters and clear, smooth sand of the touristy Mayan Riviera turned into a brown mess. The sight of sargassum -- a type of brown algae -- and its smell scared tourists away, and local ecosystems started to suffer greatly.

This spring, the seaweed invasion was comparable to last year’s, if not worse. In May, Mexico's President Andrés Manuel López Obrador instructed the country's navy to lead the beach-cleaning effort and to prevent the sargassum from reaching the coast. In June, the situation was so bad that the southeastern state of Quintana Roo -- home of the tourist destination of Cancún -- declared a state of emergency.

To understand the extent of the ecological problem and the feasibility of the proposed solutions, Inside Science's Rodrigo Pérez Ortega talked to Rosa Elisa Rodríguez Martínez, a coral reef ecologist who works at the National Autonomous University of Mexico’s Institute of Marine Science and Limnology, in Puerto Morelos, a small coastal town 24 miles south of Cancún.

This interview was conducted in Spanish and has been edited for clarity and brevity.

Rodrigo Pérez Ortega: You were among the first scientists who realized the sargassum invasion could damage the coral reefs in the Mexican Caribbean. Can you describe the timeline of this bloom and how it affected your research?

Rosa Rodríguez Martínez: In 2015, everyone thought it was something weird, that maybe it wouldn’t happen again. In 2016 and 2017 sargassum arrived, but not so much, so everyone relaxed. And then, in 2018, we saw that a greater amount than in 2015 was arriving and that was when the alarms went on. We saw how water quality was deteriorating and we thought it would have an impact on the ecosystems we studied. First, seagrasses started dying in the areas near the beach. And then, last year, corals began to die massively because of a disease.

Because there are not so many corals now, our research has shifted to study sargassum, too.

The source of this seaweed was unclear for many years. Some studies suggested that most of it was coming from Brazilian coasts -- and not from the Sargasso Sea near the U.S. east coast -- and that nutrient-rich runoff from the Amazon River was leading to eutrophication -- excessive amounts of nutrients -- of Brazilian waters, causing the rapid proliferation of sargassum. A recent study published last month by Chuanmin Hu, from the University of South Florida, and colleagues, pinpointed that its origin lies in the middle of the Atlantic. How does this new evidence add to the current understanding of the seaweed?

He and his group have been reporting sargassum events with their satellite measurements for many years now. This new study changed the landscape of what we knew before. Everyone was blaming Brazilians for these invasions, but what the study shows is that it is something much bigger and much more complex.

A whole giant belt of sargassum has already formed in the Atlantic that goes from Africa to the Gulf of Mexico. They also did the nutrient analysis, confirming that the Amazon River discharge is influencing the seaweed’s growth, as well as the upwelling [cold and nutrient-rich water rising from deeper parts of the ocean to the surface] that occurs on the east coast of Africa. Climate change and eutrophication surely have something to do with it.

How bad is the environmental impact of this invasive species on local species?

The impact is very serious. The issue is so big and complex that almost every question you ask would require a lot of research. Sargassum arrives to the beach, dies and forms what we call the "brown tide," which is basically decomposing organic matter stirred in the water. This tide then reduces the amount of light that reaches the seagrasses and creates conditions of low oxygen as well as an increase in ammonium and sulfates. In short, the water quality deteriorates.

Since 2015, we have lost a significant number of seagrasses and they will take many decades to recover, assuming that the sargassum is controlled. If it continues to arrive, they will not recover. As of last year, we already began to record massive wildlife mortality -- we began observing dead animals along the beach.

Last year, we identified dead individuals of 78 species on the beaches, especially fish, but also crustaceans, lobsters, urchins, octopuses and others. As of May of last year, corals also began to die from a disease called “white syndrome.” We have no evidence yet that it’s caused by sargassum, but it began in May when it was the peak month of sargassum arrival in 2018. In some monitoring sites, we have recorded that 50% to 80% of the corals died in six months.

Corals are very delicate animals; they grow very slowly -- about one centimeter per year. These corals were between 100 and 700 years old. Other researchers are rescuing coral fragments to try to preserve their genetic information.

What aspects of sargassum are you studying now?

Right now, we are studying heavy metals from the seaweed and trying to analyze samples throughout the Mexican Caribbean to see what the composition of these metals is. We are also studying the macrofauna that is associated with the sargassum because if you intend to use machinery to collect the sargassum at sea, you also have to see what else you are taking out.

How do you and the rest of the local scientists feel about this situation?

It’s very sad. Here, in Puerto Morelos, we achieved National Park recognition more than 20 years ago; we take care of it, regulate tourism activities, coastal development … and suddenly the sargassum arrives, and within four years the whole ecosystem is dying or changing.

Do you think that sargassum has radically transformed the community of the Mayan Riviera?

Yes, I think that there have already been some changes; now, picking up sargassum is a new source of work, another is to transport sargassum, another one is to work in disposal sites. But I believe that we still can’t see the impact in terms of the massive layoffs of hotel staff if the situation does not improve.

When jobs opportunities are reduced, crime rises. People are already worried now, angry, upset, that nothing is being done and there are riots. Some people have started to migrate.

What are the main efforts that are being done to solve the issue?

Many efforts have been made in Mexico to address the problem -- thousands of people are picking it up in the beaches, specialized boats collect it in the open sea, and hotel owners have installed barriers to prevent the seaweed from reaching the beach. But I think that the volume of sargassum that arrives is far beyond our capacities to clean it.

But, obviously, it is not a problem to be solved at the local level. We must seek international cooperation, in order to reduce all our nutrient contributions to the sea.