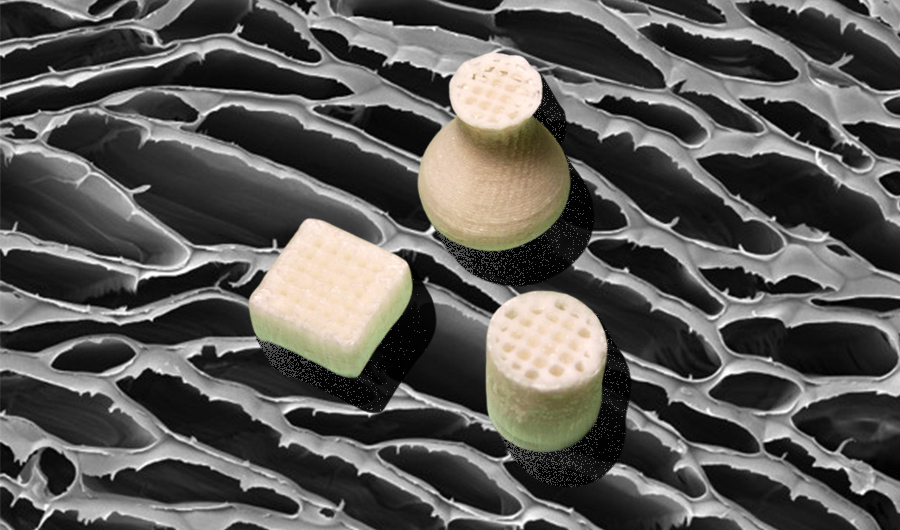 3D-printed cellulose aerogels on a background of an scanning electron microscope image of the porous internal structure.

(Inside Science) -- Ultralight materials called aerogels made of more than 99% air may one day help make flying, living in a busy city, or even sleeping on the international space station quieter, new research suggests.

The first aerogel was invented in the late 1920s or early 1930s by the chemist Samuel Kistler, who found a way to remove the liquid from a silica gel while leaving its wispy, porous solid structure intact. Since then, scientists have produced aerogels from a wide range of materials, including carbon, metal oxides and polymers. A graphene aerogel made in 2013 holds the record for the least dense solid: A cubic foot of the stuff would weigh a mere 1/100th of a pound.

So far, the applications for aerogels have been fairly niche. NASA has used them to insulate rovers exploring Mars and to catch comet dust. They have wound up in insulating blankets and the shoes of a mountaineer summiting Mount Everest.

Now, new research suggests aerogels may make good sound absorbers, especially for applications such as air and space travel where weight really matters. Bhisham Sharma, an engineer at Wichita State University in Kansas, and his colleagues tested the sound absorbing abilities of two types of aerogels: granules of commercially available silica aerogels, and custom 3D-printed cellulose aerogels fabricated by Dong Lin and Shuting Lei at Kansas State University. They found that -- for a given weight -- both types of aerogels absorb significantly more sound than conventional noise reduction materials such as foam. The 3D-printed aerogels also mitigated noise across a broader spectrum of frequencies.

Sharma said the long-term objective is to use aerogels to make aircraft lighter and quieter, but he also sees other applications, including combining aerogels with other materials to simultaneously insulate and reduce noise in buildings, or using them to better sound-proof the sleeping quarters of ISS astronauts.

The relatively high cost and brittleness of aerogels have held them back, but Sharma said he hopes new research and expanding applications could tackle both issues.

During their investigations, the researchers also discovered that conventional acoustic modeling doesn’t accurately capture the behavior of aerogels. "They are better sound absorbers than we would expect based on the models," Sharma said. Figuring out why is another area they are currently exploring.

Sharma presented the team’s findings this week at a virtual meeting of the Acoustical Society of America.