Researchers have developed unique gaits for rovers to prevent them from getting stuck in deep sand or soil.
Image 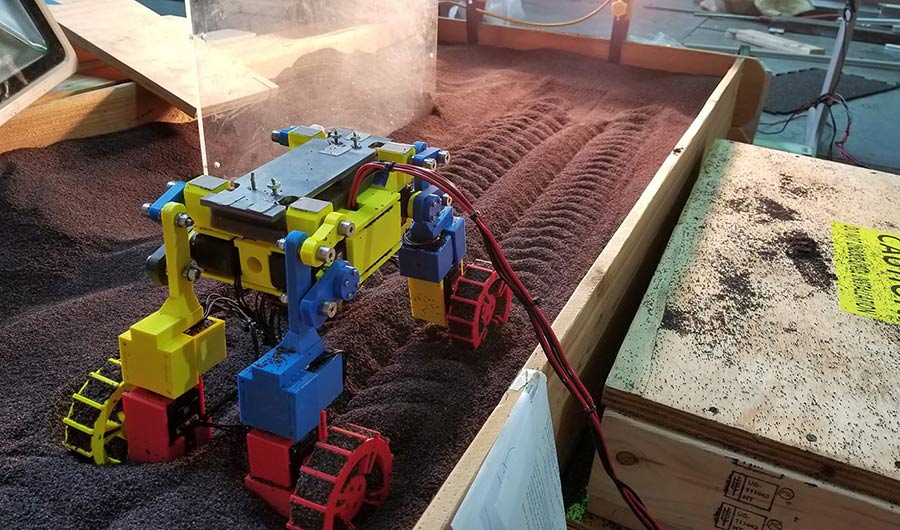 The bed of poppy seeds helps the engineers model the rover's movement across loose surfaces.

(Inside Science) -- Alone on the desolate surface of Mars, NASA rover Spirit rests in an unmarked grave. Spirit became trapped in a pit of loose sand in 2009; engineers tried for months to extricate it, wheels spinning, to no avail. Since then, scientists and engineers have been searching for better methods of rover locomotion across loose, soft soil.

A team of researchers at Georgia Tech recently engineered a new type of gait that could prevent future rovers from sharing Spirit’s fate.

The Resource Prospector rover, known as RP15, was designed to perform scientific surveys on the surface of the moon. NASA engineers had previously devised a gait to help the robot overcome sandy, grainy terrain for a project that was canceled in 2018. It used a forward-crawling motion, with wheels that took turns lifting and sweeping like paddles, reminiscent of a person swimming freestyle.

Daniel Goldman, an experimental physicist at Georgia Tech, and his research team continued testing RP15’s locomotion in the lab, however, to learn more about movement in loose media. They 3D-printed a smaller model of the rover, filled a tank with poppy seeds, and experimented with different gaits. 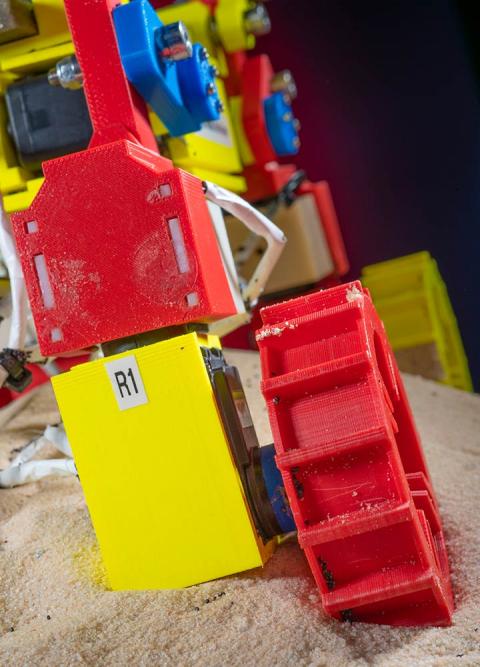 The minirover's leg can be raised and lowered and the wheel moved from side to side to move through loose granular surfaces.

Poppy seeds are “cheap, plentiful, and fit the bill,” according to Goldman, who added that poppy seeds act very similarly to sand, but are less abrasive and therefore have a lower risk of damaging equipment. The team validated the original gait created for the RP15 project and modified it to perform even better on steep inclines. If only the rear wheels were allowed to “crawl,” while the front wheels stayed straight, the rover was able to climb a steep slope without becoming unstable.

“That creates this kind of granular bubble, modifying the terrain to favor robot performance,” Goldman said. “Proper movement requires this interesting interaction between the thing in motion and the environment, and we were able to observe some cool phenomena.”

The team even got to try thegaits on the full-sized RP15 rover at the NASA Johnson Space Center. But the rover, after sitting in storage, had only three functional limbs. The rover still performed well in sand, suggesting the gait is robust enough to help the rover survive a situation where one of its limbs becomes damaged.