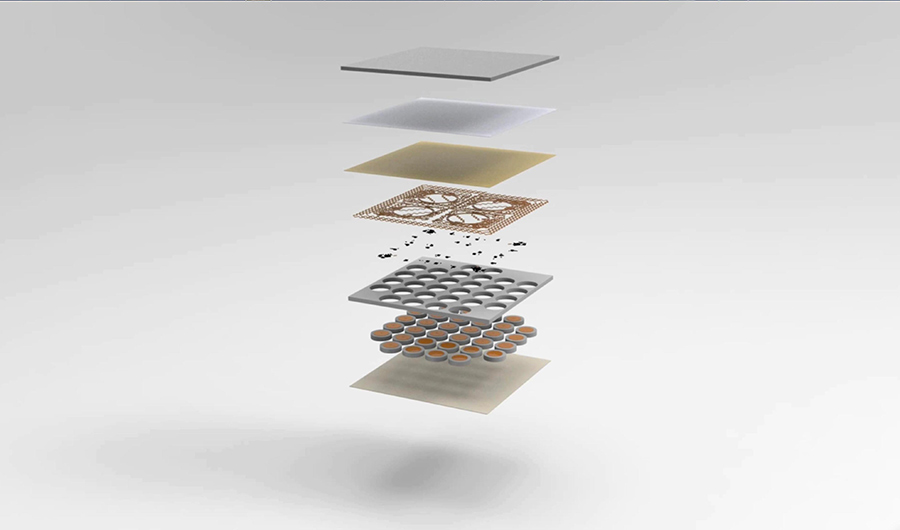 The layers of the lightweight device designed to add touch to virtual reality experiences.

(Inside Science) -- Imagine a virtual reality system in which you don’t just see and hear, but also feel experiences such as a grandmother's embrace or the strikes in a combat video game.

"Adding touch to audio and video experiences could really help expand the immersive, personal quality of virtual reality," said John Rogers, a materials scientist and director of Northwestern University's Center for Bio-Integrated Electronics in Evanston, Illinois. Rogers and his colleagues have taken an important step toward more widespread tactile virtual reality by designing soft, thin, skin-like wearable interfaces that generate sensations of touch using wirelessly powered and controlled miniature vibrating devices. They detail their findings in the Nov. 21 issue of the journal Nature.

The new inventions are lightweight sheets that eschew the wires and batteries that made previous devices bulky and awkward.

At the core of each interface is an array of vibrating components called actuators made of copper wire coils mounted above magnetic disks.  When electric currents run through the coils, the magnets vibrate at the same frequencies as the currents. Each actuator is only 12 to 18 millimeters wide, 2.5 millimeters thick and 1.4 grams in weight -- one 15-centimeter-by-15-centimeter prototype held 32 actuators.

Above the actuators are electronics that receive and transmit radio signals to wirelessly control the vibrating devices. These electronics also include antennas to convert energy from incoming radio signals into electricity to power the interface. All these components are embedded in soft, thin, flexible silicone materials that stick to the body without tape or straps.

In contrast with the limit of a dozen or so actuators in previous VR garments, the researchers suggest they could readily scale up to hundreds. "By analogy, imagine going from a collection of LED lights to an LED display," Rogers said.

In the future, the researchers plan to incorporate heating and cooling into the device and find ways to generate mechanical forces not just directly at the skin, but along it as well for shearing or twisting sensations. In addition, the level of force the actuators currently generate "feels like a light fingertip touch -- it would be nice to extend our work to higher levels of pressure, and to make the entire system thinner and more lightweight," Rogers said.