The armor might help leafcutter ants defend the valuable fungus they grow for food.
Image 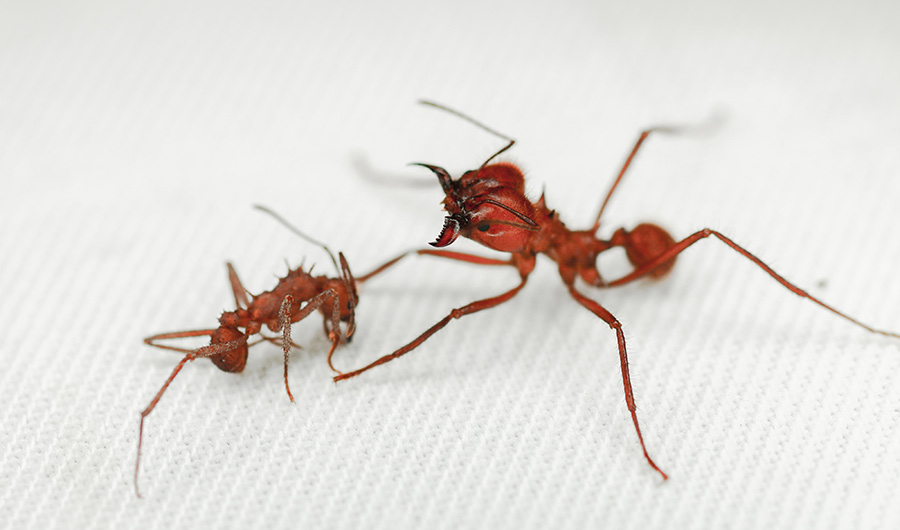 An Acromyrmex echinatior worker ant (left) with an Atta cephalotes soldier ant (right). A. echinatior ants have mineralized armor that may help protect them from other ants like A. cephalotes.

(Inside Science) -- For the first time, rocklike biomineral armor has been found in the insect world, a new study finds.

Animals have incorporated minerals such as calcite into their skeletons for more than 550 million years. Although lobsters, shrimp and other crustaceans are known for their biomineral armor, such shells were not previously seen in their cousins the insects.

Evolutionary biologist Hongjie Li and his colleagues made the discovery while studying interactions between the leafcutter ant Acromyrmex echinatior and bacteria. Li, who works at Ningbo University in China, wanted to clean off a white coating on these ants that other researchers told him was wax. He tried a variety of solvents and found that mouthwash worked. This suggested to him that the coating was mineral, not wax. After X-ray analysis of the ants, Li told his colleagues he found "rock ants," he recalled.

The scientists found that this coating was made of magnesium-rich calcite that developed rapidly as worker ants matured, covering nearly the entire body. Poking the biomineralized ant exoskeleton with a microscopic probe revealed it was more than twice as hard as the exoskeletons of typical ants, beetles and honeybees.

The researchers found that young workers isolated from their nests and other ants do not develop biomineral armor, perhaps because some source of magnesium or calcium was absent. They then conducted experiments where 30 A. echinatior worker ants -- half with biomineral armor, half without -- were pitted against 10 substantially larger and stronger soldier ants of a different species, mimicking territorial ant wars that are common in nature.

Leafcutter ants harvest vegetation on which they farm fungus for food. The scientists noted that human farming settlements were highly susceptible to marauding bandits, leading to the development of specialized warriors, armor, weapons and fortified cities. They speculate that fungus-growing ants might have evolved biomineral armor for similar reasons -- at least in part for defense against other ants.

The fact that biomineral armor is only now being discovered in a relatively well-studied ant hints that such armor might have gone unnoticed in other insects as well, the researchers noted. Indeed, many species of fungus-growing ants are covered with white grains similar to A. echinatior's.

"Biominerals are probably much more common in insects than we currently realize," said Cameron Currie, an evolutionary biologist at the University of Wisconsin-Madison and one of the researchers who conducted the study.

The scientists detailed their findings online Nov. 24 in the journal Nature Communications.