New tools are creating a trend in archaeology research: excavation without digging.
Image 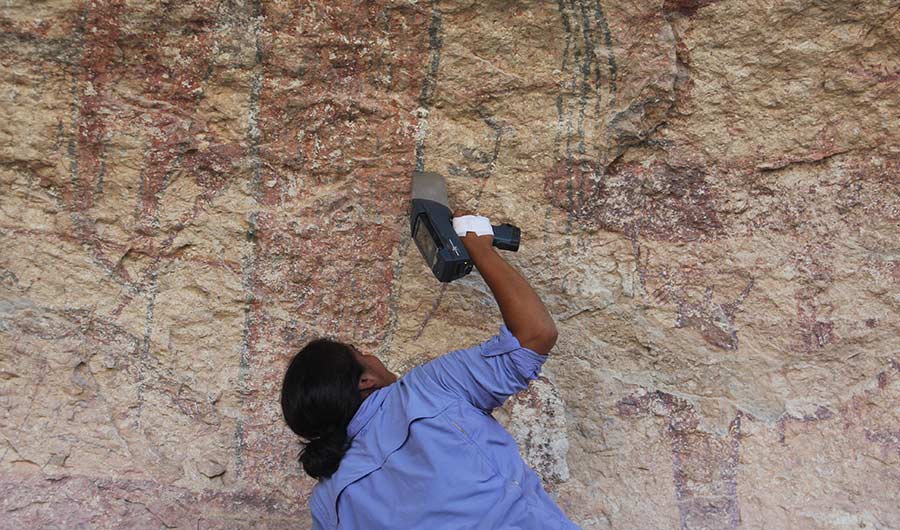 A portable X-ray device can help scientists study rock art without touching it.

(Inside Science) -- The idea of digging, chipping and brushing away to uncover the past is tightly linked to archaeology. But new ways of seeing into the Earth -- and through layers of paint -- are helping researchers understand the past while keeping it intact for the next generations.

That’s one of the ideas behind new research that uses portable X-ray machines, known as pXRF, to decipher the chemical contents of paint pigments. “This is part of a whole explosion of nondestructive imaging,” said Karen Steelman, a chemist at the Shumla Archaeological Research and Education Center in Comstock, Texas. “There are a lot of field sciences that could benefit from not having to take a sample back to the lab.”

Steelman used a hand-held X-ray gun to measure 138 different areas on a massive rock art mural. She wanted to understand the way the giant panel -- painted between two and four thousand years ago -- was composed. The measurements revealed previously unseen layers of black pigment under layers of red, which were made with manganese and iron oxide, respectively. She presented her work last week at the meeting of the American Chemical Society in Orlando, Florida.

“When you deal with people who have never seen rock art before, they think it’s just doodles,” Steelman explained. “But this is complex, monumental art -- and the figures can be a couple meters tall. So this was a planned composition just like a mural in a church.”

At around $50,000 per device, the use of pXRF has exploded in museums, universities and research institutions, Steelman says -- but it hasn’t been applied to rock art all that much until now.

For Lindsay Bloch, who uses pXRF to analyze ceramics, the technique is just part of a toolbox for nondestructive archaeology. Bloch teaches courses on how to use the portable X-ray devices, and she cautions that it works best in specific situations, when the samples are made of one material and not mixed with the surrounding environment. One of the ideal materials for analysis is obsidian -- a naturally occurring volcanic glass -- because it is fine-grained, tends to stay clean, and doesn’t gather a lot of surface contamination.

“A lot of archaeological materials have chemical reactions when in the ground,” said Bloch, a historical archaeologist at the Florida Museum of Natural History. “So they get coatings on the material, and it’s not clear what part of the chemical signature is the material and what is coming from the sediment around it, like rust and corrosion.”

There is a growing trend toward noninvasive archaeology. In Portgual, many parts of the entire ancient city of Ammaia were excavated without digging between 2009 and 2013, thanks to ground-penetrating radar and drone photography. That’s important because when archaeologists do expose old artifacts to modern environmental conditions, they require a ton of upkeep and can sometimes crumble -- literally -- as happened in 2010 when Pompeii’s House of Gladiators collapsed.

“We are all very keenly aware of how destructive our profession is,” said Bloch. “Once you excavate a site, you can never re-excavate it exactly the same way. Because we are so concerned of getting so much information from every aspect of the archaeological record, hopefully the technology will be better in the future.”

Some of those future technologies may include fleets of supercapable robots who can squeeze into small holes and hidden spaces to uncover mysteries. That’s what one collaboration between the University of Leeds and Scoutek Ltd. is working on at the Egyptian pyramids in Giza. The researchers are using robots equipped with small endoscopes -- cameras and lights – to fit through holes as small as a millimeter.

There are certain times when it’s a luxury to leave a site untouched for future exploration, said Bloch. “The vast majority of projects are taking place because a highway is about to go through the site or a building is about to go up on top of it, so there is a need to excavate and get the information we can, right now.”

In addition, many coastal sites are in danger of being lost to sea level rise. In Florida in particular, there are archaeologists whose job it is to monitor the preservation of culturally significant sites along the coast. Sometimes that means a quick excavation to save what’s possible before flooding occurs.

Still, Bloch looks to the increasing use of pXRF, radar and even CT scans that allow scientists to get a fuller picture of artifacts. “If we can see inside without putting a shovel in the ground, it’s a fabulous way to go,” she added.

Increasing the use of nondestructive technology is one reason it’s so important for physical scientists to work closely with archaeologists, said Steelman. “Sometimes we stay too separate, but coming together allows us to do things in a new way and hopefully do better science.”