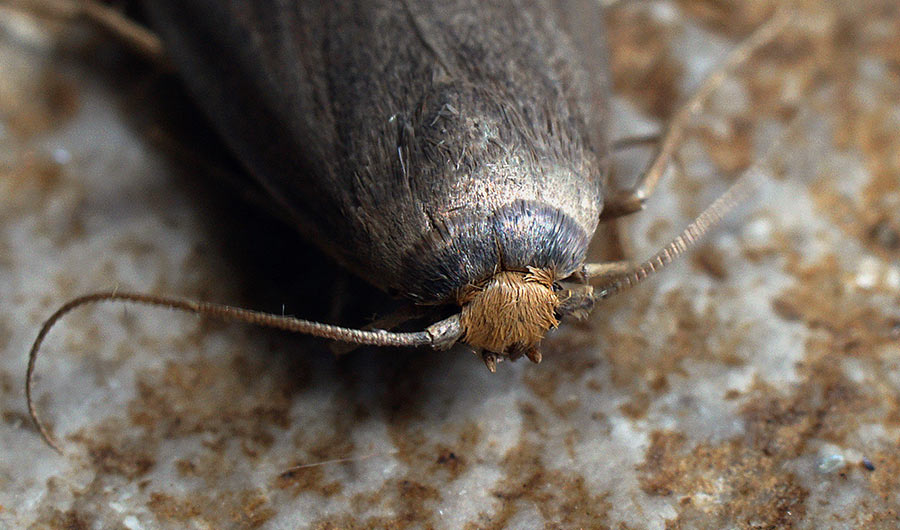 (Inside Science) -- One membrane, three neurons. That's all a lesser wax moth needs to not only hear a sound, but pinpoint where it's coming from. Now, researchers are working to figure out how they do it -- knowledge that could someday be useful in designing products such as cell phones and hearing aids.

Humans and most other vertebrates can sense the direction a sound is coming from because they have two ears separated in space.

"We can tell where sounds are coming from because the two ears receive incoming signals at a slightly different time. And even though we don't consciously realize this, our brains are able to basically do the math," said Lara Díaz-García, a doctoral candidate working with James Windmill and Andrew Reid at the University of Strathclyde in the U.K.

That solution doesn't work for very small animals because sound reaches both ears at almost the same time. Some insects, such as crickets, achieve directional hearing by routing sound through different pathways to exaggerate differences in timing and volume based on where the sound is coming from. But the lesser wax moth, Achroia grisella, has no such system.

Female wax moths find mates using a combination of scent and sound. First, a female follows the smell of a male's pheromones until she is within about a meter of him, said Díaz-García. Then, she lands and runs toward his song.

The female moths are only half an inch long. Their tiny ears, which sit side by side on their bellies, are about half a millimeter apart. In the 1980s, a different research team found that females could still locate males even when they were deaf in one ear.

In more recent work, Reid, Windmill, and their colleagues analyzed the structure of the moths' ears. Each ear has a vibrating membrane called a tympanum, comparable to a human eardrum. The moths lack complicated structures such as the cochlea; instead, each tympanum connects directly to just three neurons, which carry signals to the moth's brain.

The researchers believe the secret to the moths' sound-tracking abilities lies in the structure of the tympanum. The membrane is shaped like an oval, with the section in front (toward the moth's head) thicker than the section in back. When a sound hits the membrane, the two sections move differently. The thinner part, which is where the neurons attach, vibrates with larger movements and more complicated patterns.

To test whether these differences could account for the moths' abilities, Díaz-García and her colleagues created a computer simulation, which they presented this month at the Acoustical Society of America meeting in Seattle. More analysis is needed to actually simulate directional hearing, said Díaz-García. However, her preliminary findings show that the thinner part of the simulated tympanum vibrates more intensely when sounds come from in front of the moth -- a phenomenon that could potentially allow a female to zero in on her partner's song.

"It's definitely amazing to see what something so small and so simple can achieve," she said.

Díaz-García is working to build a functional model of the moth's ear, and she and her colleagues hope their findings will prove useful in designing directional microphones. Directional microphones are most sensitive to sounds coming from a particular direction. Small ones are already used in cell phones and hearing aids, while larger ones are widespread in the music industry.

"It would be nice to have a microphone that fits in a hearing aid that has as good a sensitivity as the great big fat microphones that they use onstage. Those are better microphones than the little ones," said Stephen Thompson, an acoustician at Penn State who is not involved in the moth research.

Older directional microphones had a hole on either side for sound to enter, so that the sound waves canceled each other out unless they were stronger from one side than the other. (Further adjustments allowed the microphones to pick up sounds only from the front, rather than from both front and back). Modern hearing aids sense direction by calculating the differences between sounds picked up by multiple microphones, which are placed as far apart as the size of the hearing aid will allow, said Thompson. In general, as components get smaller and closer together, the level of meaningless noise increases.

It's too early to say whether the wax moth's ear structure can inspire improvements to current technology, and at the moment, Thompson is doubtful. Researchers have tried before to model directional microphones on the ears of an insect -- in that case, a parasitic fly. The fly's ears have membranes that resemble tiny teeter-totters, tipping one way or the other depending on where the sound hits. That idea seemed promising, but it was never widely applied in commercial microphones.

Nevertheless, "the moth does it in a way that's different than anyone's ever thought of doing it before," said Thompson. "Maybe that will be an idea that will help us to do something better."