American scientist Siegfried Hecker journeyed to North Korea, where he was able to hold a lump of plutonium.
Image 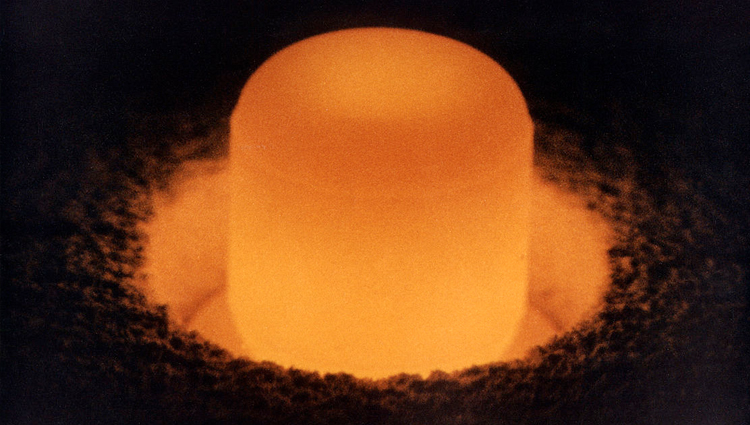 A pellet of plutonium-238, glowing from its own heat, is used for radioisotope thermoelectric generators.

Department of Energy via Wikimedia Commons

WASHINGTON (ISNS) -- Siegfried Hecker, sitting in a cold conference room, was asked by his North Korean hosts if he would like to see their "product."  "Yes," Dr. Hecker replied. "Do you mean plutonium?"
Hecker, former director of the U.S. weapons lab at Los Alamos and familiar with the hazardous properties of plutonium, was surprised when two technicians carried a small red metal box into the room. Inside was a white wooden box containing two glass jars -- they looked like marmalade jars -- one containing a piece of plutonium metal, the other plutonium powder. He later asked if he could hold the jar with the metal. Only then was he pretty sure it was plutonium, because of its heaviness and because it was warm.
The warmth came from the radioactive rays emitted by plutonium.  Fortunately, the rays were weak enough to be harmless, but the metal is potentially deadly if ingested or inhaled. And, of course, plutonium is particularly deadly when it powers a nuclear bomb, as it did in the nuclear explosion that obliterated Nagasaki during World War II.
The threshold for being considered a nuclear power pretty much means that a country must possess enough plutonium, about 13 pounds, to make a nuclear bomb. This dangerous element takes its name from Pluto, the god of the underworld.
Hecker has been to North Korea six times. On his first visit, in 2004, he was handed the sample of plutonium, he believes, because the North Koreans wanted to impress upon the U.S. the seriousness of their nuclear efforts. Even though at that time he was no longer Los Alamos director, Hecker was an acknowledged expert on plutonium, and would be sure to recognize what the North Koreans had done.
Hecker described his Korean journeys in February at a meeting of the American Physical Society in Washington, D.C.
Another important part of his nuclear diplomacy, mostly carried out as Los Alamos employee or Stanford professor, was his numerous trips to Russia, 41 all together. He was one of the first western scientists to be allowed into the most secret of Soviet nuclear sites.
Even though you're probably not aware of it, Dr. Hecker’s efforts have had a subtle impact on your life. He helped establish a program involving Russian and western scientists, who cooperated to dismantle Russian nuclear weapons and to account for tons of fissionable material -- plutonium and uranium -- parked at many sites around the former Soviet Union. One consequence of this program was to bring a lot of uranium from Russia to America. In fact, about half the uranium now used to make electricity in U.S. reactors comes from Russia. In other words, about 10 percent of the electricity going through your computer right now was once part of the Soviet nuclear weapons complex.
Last month Siegfried Hecker received the Enrico Fermi Award, the highest award given by the U.S. Department of Energy. He was recognized for his research on plutonium and for his efforts to reduce the danger of nuclear weapons.
Filed under
Physics
Culture
Physics and society
Author Bio & Story Archive