An orbiting telescope traces powerful cosmic rays from deep space back to their source.
Image 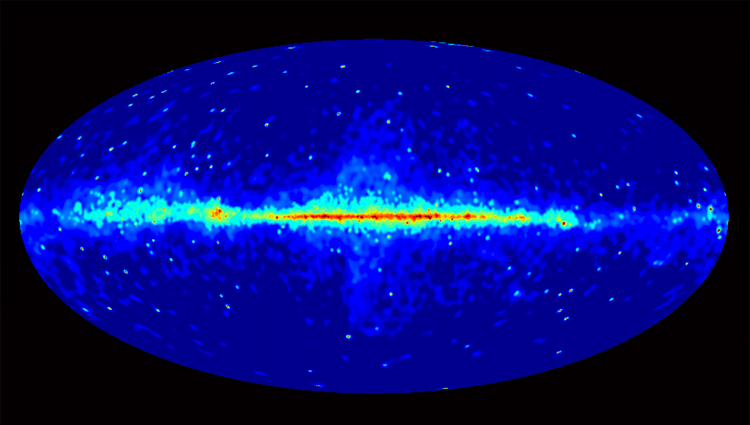 WASHINGTON (ISNS) -- A new map of the sky made using a telescope sensitive to the most powerful kind of light, called gamma radiation, shows that some cosmic rays are coming from those exploding stars known as supernovas. The new maps should give astronomers a better chance of understanding the birth of the mysterious rays.
Cosmic rays are energetic particles that stream through the universe. Some slam into Earth's atmosphere, triggering a cascade of other particles detectable on the ground. A popular theory holds that cosmic rays are created in supernovas. But until now this has been difficult to prove. The rays must travel to Earth from distant parts of our galaxy, or even from other galaxies far away. Magnetic forces can deflect the rays during their trip through space, confusing our sense of their origin.
That's where the Fermi Gamma-Ray Space Telescope comes in. Launched into Earth's orbit in 2008, Fermi looks at some of the most violent processes in the sky -- including supernovas. Scientists think that some cosmic rays fly away from the exploding stars and then crash into nearby gas clouds in space, where they convert into gamma light. Unaffected by magnetism in space, it is this light that continues on toward Earth, eventually striking the Fermi telescope.
The telescope acts like a huge digital camera taking pictures of the supernova debris. Because it can take hundreds or thousands of years for the light to complete the trip to our planet, the light that we can currently see shows the supernova as it was centuries or millennia ago.
The Fermi telescope's advanced imaging ability provides a new view of the remnants of supernovas for this kind of gamma-ray light. The sharp new pictures, and the explanation behind them, were made public during a meeting of the American Physical Society this held this week in Washington, D.C.
One of the scientists involved, Stanford physicist Stefan Funk, said that the gamma pictures, combined with observations made with other telescopes sensitive to other kinds of light, allow astronomers to confirm that many high-energy cosmic rays come from supernovas.
Filed under
Space
Technology
Computers
Engineering
Physics
Author Bio & Story Archive