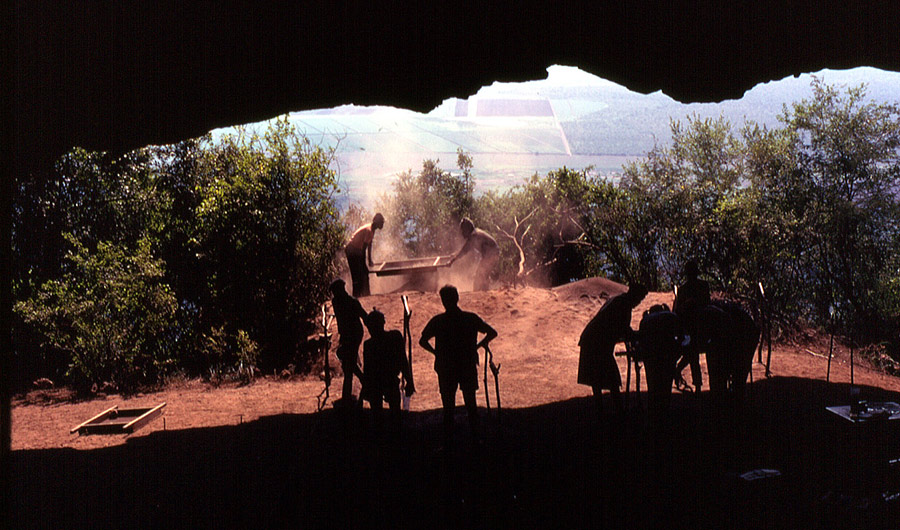 View from the mouth of Border Cave in South Africa, the site where researchers discovered fossilized bedding used by ancient humans.

(Inside Science) -- A cave in South Africa may hold early evidence of human innovation in sleep technology. A new paper published today shows how people 200,000 years ago put together grass and ash to make carpet-like structures to keep insects off them while they slept. The use of ash suggests they could control fire.

Lyn Wadley, an archaeologist at the University of the Witwatersrand in Johannesburg, South Africa, had worked at a different cave previously. There, she discovered 77,000-year-old bedding made from grass-like plants called sedges. "The sedges had medicinal plants on them, presumably laid there to serve as an insect deterrent," Wadley wrote in an email. "I was fascinated by the idea that early Homo sapiens would have had such knowledge."

Then, while excavating a deep layer of a cave called Border Cave, she saw similar traces of fossilized grass that piqued her interest. The bedding was found along with stone tools and the debris from making them, so Wadley and her team knew it was made by humans rather than other animals. Under this bedding were layers of ash. The research was published today in the journal Science.

The researchers took blocks of sediment from the excavation, cast them in a plastic resin, and then sliced them into thin sections that could be examined under a microscope to view the structure of the bedding. The findings indicated that fireplace ash was raked to form a clean base for the grass bedding and to prevent insects from crawling into it. The researchers also found charcoal from burned camphor wood and speculated that the medicinal smoke may have been used to dispel insects.

Wadley estimates that each "bed" would have been nearly a foot deep. She added that the bedding piles were relatively close to the back of the cave, away from wind and mist. Humans would have lit small fires near them for light, domestic activities and protection from predators.

Birds make nests and some animals sleep on grass, so that alone does not make the discovery special, wrote Wadley. But she added that the importance of the finding comes from the methods: the people who lived there appeared to construct the bedding with purpose, laying grass on top of insect-repelling ash, and there is evidence they burned old pest-ridden bedding.

These behaviors indicate an understanding of the medicinal properties of ash, a desire to keep a campsite and the people in it healthy, and a desire to lengthen the potential stay at a campsite through cleansing strategies, Wadley wrote. "Importantly, the creation of the ash layers and the burning of the old bedding and the lighting of repeated small fireplaces implies that people could create fire at will -- perhaps by striking stones to make sparks."