The winners of the chemistry prize developed ways to produce machines 1,000 times thinner than a strand of hair. 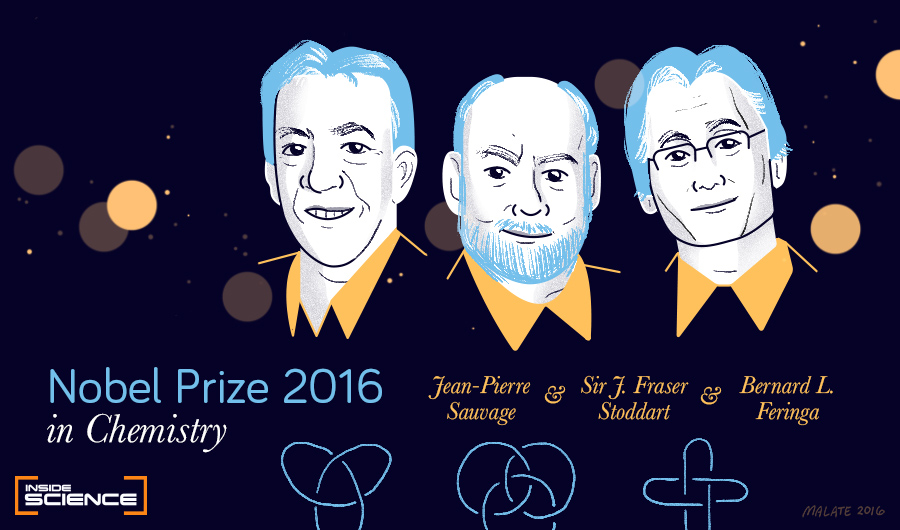 (Inside Science) -- The 2016 Nobel Prize in chemistry has been awarded to three chemists "for the design and synthesis of molecular machines."

The prize goes jointly to Jean-Pierre Sauvage of the University of Strasbourg in France, Sir J. Fraser Stoddart from Northwestern University in Evanston, Illinois, and Bernard L. Feringa, from the University of Groningen in the Netherlands.

Molecular machines are considered the world's tiniest machines. The laureates are recognized for linking molecules together to design everything from tiny elevators to miniature muscles. These tiny devices are as much as 1,000 times thinner than a strand of human hair. The discoveries, which in many ways mimic the processes that occur within living organisms, have opened up opportunities to develop new machines with myriad applications.

Researchers have long been inspired to develop smaller and smaller machines. In fact, beginning in the 1950s physicist Richard Feynman gave lectures about the field's potential. But, he didn't know how to build the machines himself.

Those developments began to occur in the 1980s and 1990s, when Jean-Pierre Sauvage recognized the similarities between his work in the field of photochemistry -- in which light triggers chemical reactions -- and the molecular chains that other chemists had begun to build. These combinations of molecules rely on what was essentially a new type of chemical bond, called a mechanical bond, which differs greatly from the covalent and ionic bonding that students learn about in high school chemistry.

"It would have nothing to do with the sharing of electrons or even with electrostatic interactions. It's just mechanic," said R. Dean Astumian, a physicist at the University of Maine, in Orono, who has collaborated with Stoddart in the past. "If you have two wedding rings that are fused together, such that one wedding ring is threaded through the other, you couldn't pull them apart."

To create a mechanical bond, Sauvage used copper to bring together two other molecules. He then removed the copper once the molecular chain was set.

He called the chains he developed catenanes, after the Latin word for chain. His research group recognized that this was the first stage in building a molecular machine. About 10 years later, they built a catenane in which one ring would revolve around the other when energy was added to the system.

In the early 1990s, J. Fraser Stoddart developed another building block for molecular motors, called a rotaxane. This is a ring-shaped molecule that is linked to an axle. He built them by constructing components that were attracted to each other, so the axle and ring combination would assemble when they came together. Within a few years, he could use heat to control the movement of the ring along the axle.

The next crucial component of the field, according to the Nobel committee, was the development of the first actual molecular motor, which was done by the third laureate, Bernard Feringa, in 1999. His innovation was to get the molecules in the motor spinning in the desired direction. The first motors developed this way harnessed UV light for an energy source. After much refinement, the motors can now spin as fast as 12 million revolutions per second. Feringa and colleagues have even developed what they called a nanocar, made up of a central body and four rotating molecular motor "wheels."

Stoddart continued to work on additional applications of the rotaxane molecules, and has contributed to the development of everything from nanoscale elevators and so-called artificial muscles to molecular-sized computer chips. The current chips have about 20 KB of memory. Because they are but a tiny fraction of the size of today's silicon-based transistors, they could someday help make computers even smaller.

The Nobel laureates overcame two main challenges to build their tiny machines: They made molecular parts that could move relative to one another, and they found ways to convert energy into movement in a desired direction.

Stephen Loeb, a chemist who studies mechanically interlocked molecules at the University of Windsor in Canada, said he's been inspired by the work of the laureates for decades. He added that what the awardees have managed to do is develop synthetic ways to replicate some of the small-scale processes that biologists have long studied.

"Chemists are only just really starting to get the hang of that," he said. "To be able to build them up from scratch with molecules and fundamental synthetic chemistry is amazing."

Even though the molecular machines the laureates created are synthetic, they've helped chemists begin to develop insight "in understanding biological motors," said Astumian.

The work of applying the laureates' insights to create new inventions and expand the understanding of existing biology is just beginning, he said.

"One of the things the Nobel committee like to emphasize is awarding a prize to something in which there are nascent applications, that you know that there's this wonderful ferment going on, but it hasn't sprouted out into real applications yet."

In a statement, the Royal Swedish Academy likened the current stage of development of molecular motors to the electric motor in the 1830s, not long before those innovations led to far-reaching technologies such as trains, washing machines and much more.

Molecular machines could one day store energy in new kinds of batteries, release drugs in the body or make adjustable sensors and lenses.

The award was announced by Goran K. Hansson, secretary general of the Royal Swedish Academy of Sciences. The winners will share a prize of 8 million Swedish kronor (about $934,000).

Editor's Note: Inside Science also released a brief story shortly following the announcement of the 2016 Nobel Prize in Chemistry. That story can be found here. All of our coverage of the 2016 prizes is available here.