2016 Nobel Prize in Physics honors theoretical discoveries that help scientists understand unusual properties of materials, such as superconductivity and superfluidity. 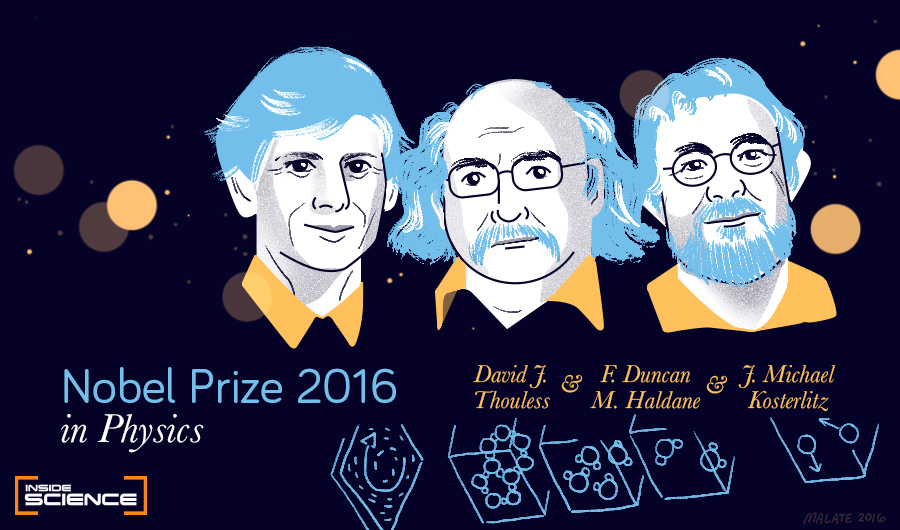 Editor's note: updated at 12:45 p.m. to include additional comments and context

(Inside Science) -- The 2016 Nobel Prize in physics was awarded to three physicists who used advanced mathematical methods to study exotic states of matter.

Working in the field of condensed matter theory, they revolutionized the understanding of unusual phases of matter such as superconductors, superfluids and thin magnetic films. The discoveries are now guiding the quest for next generation materials for electronics, quantum computing and more.

What is condensed matter physics?

Roughly half of all Nobel Prizes in physics from the last decade have been awarded to research in condensed matter physics.

This branch of physics focuses on the study of physical properties of "condensed" materials such as solids and liquids. In terms of research attention and applicability to the public, it is probably the most popular field of physics today, largely due to its close ties with technological advancements and immediate applications.

Research in condensed matter physics has led to numerous innovations that have greatly impacted modern life. For example, the discovery of giant magnetoresistance in the late 1980s made modern computer hard drives possible. More recently, discoveries such as graphene, a single-layer sheet of carbon atoms, have inspired engineers to improve current methods for energy storage and transmission.

The study of topological properties in materials is one of the frontier areas in condensed matter physics, for which many scientists are hopeful to find application in the near future.

This year's Nobel laureates David Thouless, Duncan Haldane, and Michael Kosterlitz developed mathematical models for describing and connecting the topological properties of materials in relation to other strange phenomena such as superconductivity, superfluidity and other peculiar magnetic properties. In particular, Kosterlitz and Thouless focused on studying the topologies in 2-D materials, while Haldane developed models for 1-D or near 1-D materials.

What are topological phases?

Topology is a property of matter that remains unchanged when the object is flattened or expanded. For example, a coffee mug and a donut share the same topology, because, at least theoretically, one can be mushed into the shape of the other without breaking anything apart, as the hole of the donut can become the handle of a newly formed coffee cup, or vice versa. Scientists have found that the concept of topology is extremely useful for describing certain changes in materials, specifically those that jump from one state to the next with no in-between states. This is analogous to the number of holes in a 3-D object, since you can have one hole or two holes, but not one and a half holes.

Topology is particularly important for understanding materials with properties in just one or two dimensions, such as electrons or magnetic moments that are confined to a line or a surface. These phases contain properties and transitions otherworldly from those found in the more familiar 3-D space.

Although, scientists originally focused on topological properties in 1-D and 2-D materials, they have since discovered them in 3-D materials as well. Those insights are especially important when it comes to understanding exotic phenomena such as superconductivity, which lets electrons travel through materials with zero resistance, and superfluidity, which lets fluids flow with zero loss of kinetic energy.

One of the hottest research fields in condensed matter physics today is the study of topological insulators, superconductors and metals. In brief, these are materials with electronic properties closely related to their topological ones.

There is great expectation that the theories developed by the Nobel laureates will guide improvements in electronics and superconductors, as well as futuristic quantum computers, and perhaps something not even conceived yet.

What is their discovery?

"This prize here is for theoretical discoveries. It has combined beautiful mathematical and profound physics insights and has achieved unexpected results that have been confirmed by experiments," said Thors Hans Hansson, a member of the Nobel Committee for Physics, in a presentation during the Nobel Prize press conference.

The theoretical works by this year's laureates transformed and expanded the common understanding of phase transitions in materials. Before their research, the understanding of these changes, such as those between gases, liquids and solids, hinged upon the geometrical arrangement of particles or atoms, or what physicists call the symmetry of the system.

Thouless, Haldane, and Kosterlitz discovered that similar to symmetry, the topology of materials also plays an important role in many kinds of phase transitions.

"They're showing that there are ways of classifying states of matter without worrying about the details of the symmetry. That is the radical departure," said Zahid Hasan, a physicist from Princeton University in New Jersey.

Through this revelation the laureates were able to construct a theoretical foundation to explain many previously mysterious phase transitions, such as between a superconducting and non-superconducting phase, or a magnetic and a non-magnetic phase.

"What we ultimately are looking for in science and particularly in physics is these kind of grand encompassing ideas which explain many things at the same time," said Peter Armitage, a physicist from Johns Hopkins University in Baltimore. Almost always, "that insight comes in a very specific instance, like it is here, which was a completely new way of looking at the states of matter," he said.

"I think this is the beginning and not the end," said Eduardo Fradkin, a condensed matter theorist at the University of Illinois at Urbana-Champaign.  "Even though some of this work was done in the late '70s and early '80s, it has continued to have profound impact."

What is it good for?

During the press conference, Hansson said, "This work has inspired lots of activity in labs all over the world. Scientists are hoping for practical applications in new electronics, new materials, even perhaps in components in the future quantum computer."

Since the laureates' discoveries, the study of topological insulators, superconductors, and metals has become one of the hottest research areas in condensed matter physics. These materials are defined by the connection between their electronic and topological properties.

"[The discovery] told us that quantum mechanics can behave far more strangely than we would have guessed and we really haven't understood all the possibilities yet," Haldane told the audience during the announcement, "we have a long way to go to discover what's possible, and a lot of these things were things that one wouldn't initially have dreamed were possible."

Editor's Note: Inside Science also released a brief story shortly following the announcement of the 2016 Nobel Prize in Physics. That story can be found here. All of our coverage of the 2016 prizes is available here.

Why Training with Heavier or Lighter Baseballs Could Help Pitchers Throw Faster
Fossil Bite Marks Show Some Dinosaurs Ate Their Own
Royal Jelly Does Not A Queen Make
What Does the Spiny Lobster Sound Like? Loud.
Tyrannosaurs' Long Legs May Have Been for Marathons, Not Sprints
END_OF_DOCUMENT_TOKEN_TO_BE_REPLACED