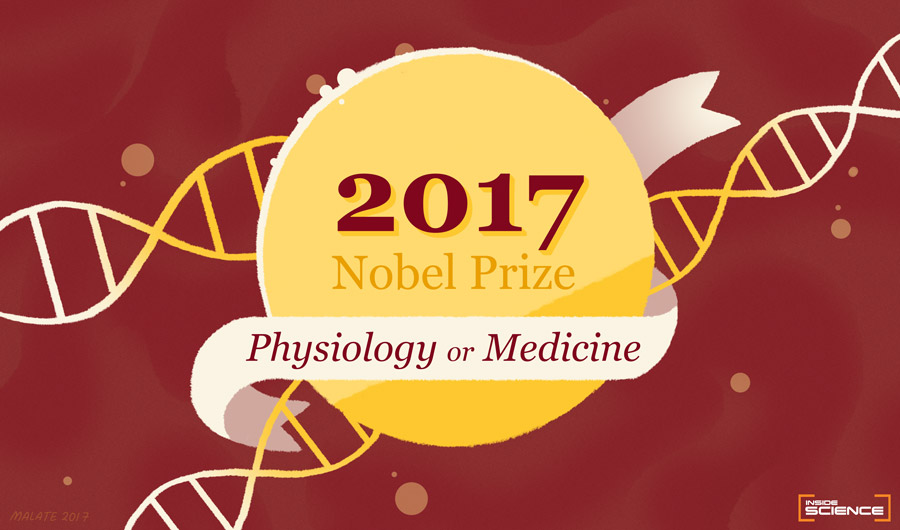 (Inside Science) -- This year's Nobel Prize in physiology or medicine has been awarded to a trio of American researchers who discovered the molecular basis behind the ability of living organisms to keep their internal body clocks entrained to a 24-hour cycle.

At 5:30 eastern time this morning, Thomas Perlmann of the Karolinska Institute and secretary of the Nobel Committee for Physiology or Medicine announced that the prize was going jointly to Michael Rosbash and Jeffrey Hall (retired) of Brandeis University outside Boston and to Michael Young of Rockefeller University in New York "for their discoveries of molecular mechanisms controlling the circadian rhythm."

After their discoveries, said Perlmann, scientists could begin to untangle the clock and its predictability.

Just as a full-sized person may have regular routines throughout the day -- you take a shower in the morning, you put on sunscreen before going out into the bright sun, you seek shelter in the shade and retire to a comfy chair in the long afternoon or you cozy up with a warm blanket by a fire at night -- so, too, do our genes follow a regular 24-hour clock.

A dizzying number of genetic transcripts, proteins and other molecular players alternatively glom together or fall apart, turning on or tuning down countless patterns of gene expression that keep our cells, organs and bodies humming along with the Earth's daily rotations. Some genes turn on at certain times. Others turn off. Some genes are like master control switches that turn down (or off) others at certain times.

And each day it all starts over again. This happens not just in humans but all mammals -- as well as insects, all other animals and even plants.

Early work in plants and insects had, in fact, established the existence of such body clocks, but it wasn't until the mid-1980s that the researchers, two of whom were collaborators, uncovered the inner molecular workings behind this basic process, called a circadian rhythm.

In 1984, Jeffrey Hall and Michael Rosbash at Brandeis University and Michael Young at the Rockefeller University isolated a gene called "period," which had been discovered a decade earlier after a genetic mutation in a fruit fly caused the creature to lose its ability to entrain its insect clock to a 24-hour rhythm.

Hall and Rosbash then discovered a protein, named PER, that was made by the period gene and figured out how it worked through a feedback mechanism -- its own expression in the cell would cause PER to build up in the nucleus and would eventually effectively shut off the period gene, allowing it to cycle on and off on a daily schedule.

Young then discovered another gene, called timeless, that expressed a protein called TIM, which works in conjunction with PER to build up and control expression of the period gene.

Circadian rhythms are fundamental parts of our physiology, and their disruption can lead to numerous health problems -- as well as the annoying jet-lag anyone who had taken a long flight will experience. The discovery of the molecular mechanisms behind circadian rhythms allows scientists to intervene in the pathways by identifying molecular targets that could be chemically blocked by drugs in order to treat such health problems.

More details are available at http://www.nobelprize.org/nobel_prizes/medicine/.

More on circadian rhythms and sleep patterns from Inside Science:

Editor's Note: Inside Science will provide detailed coverage of the 2017 Nobel Prize in a longer article to be issued later today. For all of our coverage of this year's prizes, go to https://www.insidescience.org/nobel-coverage/2017.

Protests, A Retracted Paper, and a Super-Earth Planet
Why Is an Empty Shampoo Bottle So Easy To Knock Over?
COVID-19 Vaccine, Monkeys and Bumblebees
Smart Speakers Could Detect Cardiac Arrest
Light And Art Come Together
END_OF_DOCUMENT_TOKEN_TO_BE_REPLACED