Research on fruit flies led to the discovery of the mechanisms behind "circadian" rhythms, and the 2017 Nobel Prize in physiology or medicine. 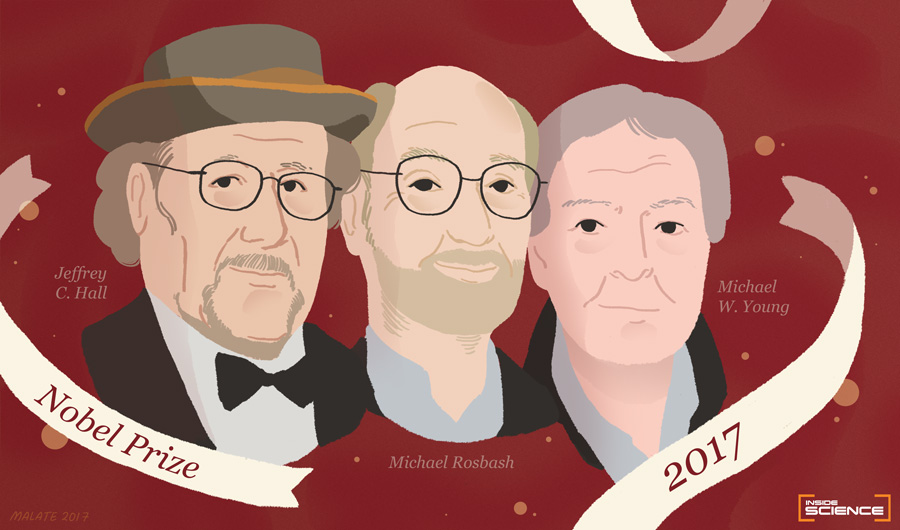 (Inside Science) -- Nestled on the Brandeis University campus just outside Boston, a few miles from where the first shots of the American Revolutionary war were fired, an old biology building witnessed the first sparks of a different sort of revolution in the 1980s.

Researchers used to gather there, in a dark basement room of a building that has long since been demolished, to collect fruit flies from a single incubator. The instrument looked like a refrigerator, except that it kept the critters at a constant, cozy 25 degrees Celsius. And it cycled them in and out of total darkness, 12 hours on, 12 hours off.

The researchers cycled in and out as well, coming and going from "the pit," their not-so-affectionate nickname for the room with the lonely incubator. They worked nights. They worked weekends. They collected data in complete darkness. As the lights went on and off, they often camped out. They lost sleep -- or else they rushed out to get a quick bite, take a short nap and return again to collect more flies.

"Working in the pit was not a joy," said Paul Hardin, a molecular geneticist at Texas A&M University who said he spent "innumerable" hours there as a young researcher. In 1990, Hardin was an author on one of the key papers from a body of research that was recognized today with the 2017 Nobel Prize in physiology or medicine, which went to three American researchers: Michael Rosbash and Jeffrey Hall of Brandeis, and Michael Young of Rockefeller University in New York.

In an apparent ironic twist to this year's prize, the quarry claimed by countless hours of sleepless toil is itself fundamental to a good night's sleep: the molecular basis of circadian rhythms -- those genes and proteins whose interactions underlie the ability of us living organisms to keep our internal body clocks entrained to a 24-hour cycle.

At 5:30 Eastern Daylight Time this morning, Thomas Perlmann of the Karolinska Institute and secretary of the Nobel Committee for Physiology or Medicine announced that the prize was going to the three researchers "for their discoveries of molecular mechanisms controlling the circadian rhythm."

Their discoveries, said Perlmann, have allowed scientists to begin to untangle the clock and uncover the myriad ways in which it influences genetic expression in the body. The knowledge may help address the health issues that arise when the normal, clocklike patterns of expression are disrupted.

"The clock governs at least half of all gene expression in the human body," said Rosbash at a press conference today. He joked that being awoken early by a call from Stockholm had already clearly disrupted his own circadian rhythms.

Just as an adult may have regular routines throughout the day -- you take a shower in the morning, you put on sunscreen before going out into the bright sun, you seek shelter in the shade and retire to a comfy chair in the long afternoon or you cozy up with a warm blanket by a fire at night -- so, too, do our genes follow a regular 24-hour clock.

A dizzying number of genetic transcripts, proteins and other molecular players alternatively glom together or fall apart, turning on or tuning down countless patterns of gene expression that keep our cells, organs and bodies humming along with the Earth's daily rotations. Some genes turn on at certain times. Others turn off. Some genes are like master control switches that turn down (or off) others at certain times.

And each day it all starts over again. This happens not just in humans but in all mammals -- as well as insects, all other animals and even plants.

Early work in plants and insects had, in fact, established the existence of such circadian clocks, but it wasn't until the mid-1980s that the researchers uncovered the inner molecular workings behind this basic process.

More on circadian rhythms and sleep patterns from Inside Science:

Hall was born in New York in 1945, and grew up in the suburbs of Washington, D.C. His scientific relationship with Drosophila, the humble fruit fly, started early. His undergraduate mentor at Amherst College in Massachusetts was a Drosophila genetics expert.

Rosbash was born in 1944, after his parents emigrated from Nazi Germany to the United States. His father died when he was only 10 years old, and the tragedy made his teenage years difficult until he found refuge at the California Institute of Technology. He began collaborating with Hall after both arrived at Brandeis.

"The labs were very close," recalls Hardin, who worked in Rosbash's laboratory but said Hall was almost a co-mentor. "Everyone in one lab knew everyone in the other lab very well."

Young meanwhile was operating a competing laboratory following the same pursuits. Born in 1949 in Miami, he indulged his youthful scientific interests by destroying a terra cotta floor with his chemistry set, building an improvised go-kart with poor brakes, and watching the exotic animals that found their way to his backyard after escaping from local private zoos.

In his backyard, there was also a plant with flowers that opened at night and closed during the day. In his early teens, Young’s parents gave him a book about evolution that described biological clocks, like the one that controlled the flower’s movement, but said how they worked was still a mystery. He was hooked.

When Young arrived at Rockefeller University, he was entering research at a time, the 1970s, when advances in molecular biology were launching the fledgling field of molecular genetics. New techniques would enable researchers to isolate genes and tie specific genetic traits or "genotypes" to observable physical or behavioral characteristics, or "phenotypes." This was throwing open doors across the fields of human health.

"You could pick anything in the world to work on," Young said at a press conference earlier today. "It was all brand new."

What he chose to pursue was the interest sparked by his teenage observations of that plant in his backyard opening and closing each day. He would succeed in his quest -- perhaps far beyond what he expected.

"I don't think we ever really thought a beautiful mechanism would emerge in a lifetime," he said.

A period followed by a full stop

In 1984, the Brandeis and Rockefeller groups, working separately, isolated a gene called period, which had been discovered a decade earlier after a genetic mutation in a fruit fly caused the creature to lose its ability to entrain its insect clock to a 24-hour rhythm.

Hall and Rosbash then discovered a protein, named PER, that was made by the period gene, and figured out how it worked through a feedback mechanism -- its own expression in the cell would cause PER to build up in the nucleus and would eventually effectively shut off the period gene, allowing it to cycle on and off on a daily schedule. But nobody understood how PER was getting into the nuclei of the cells where it would act on the period gene.

The significance of the discovery is that the clock controls almost all aspects of nutrient metabolism, which means that it has profound implications for human health and disease. When it's out of sync, health problems can arise -- from weight gain to sleep loss or worse. Hardin pointed to linkages to diabetes.

"Even cancer is impacted by shift work and circadian timing," said Rosbash at a press conference earlier today.

More fundamentally, Hardin added, the discoveries were really one of the earliest examples of genetic control of behavior, uncovering the molecular mechanisms that account for the daily pattern of activity Drosophila follow.

"In essence, that's what this Nobel prize is being given for, in my opinion," he said.

Since the original work was done more than 30 years ago, many follow-up studies have focused on identifying other molecular players involved in circadian rhythms, teasing out how they interact with one another and discovering how disruptions to this fundamental part of our physiology may lead to numerous health problems.

People who do shift work may fall prey to the unforgiving cycling of the body's fickle clock, and it also plays an outsized role in the annoying jet lag anyone who has taken a long flight will experience.

Some sleep disorders may be tied to specific genetic variants in the genes underlying the circadian rhythms, which may lead to new ways of treating those disorders.

Earlier this year, Young's group identified an inherited genetic variant dubbed "night owl" that may affect as many as 1 in 75 people and is linked to a condition called delayed sleep phase disorder. People who suffer from this condition have difficulty going to sleep at a normal hour because their bodies stay energized far too long into the night. They are pumped up when they should be winding down -- something that Young said is equivalent to suffering jet lag every single day.

"This gives us a target to work on," Young said at a press conference in New York this morning, alluding to the possibility that this basic research discovery may lead to a possible way to intervene in the aberrant pathway and fix it, enabling people who suffer from the condition to adhere to a normal sleep schedule without the need for sleeping pills.

Whether the discovery of what appears to be the molecular mechanisms behind this condition will lead to new ways of treating delayed sleep phase disorder remains to be seen. Identifying a new molecular target does not guarantee we will find a safe and effective way to fix the problem pharmaceutically, but it does give us a place to start.

Similarly, identifying molecular targets that could be chemically blocked by drugs may also help treat people who suffer from terrible jet lag or shift workers. As for the greater mystery of sleep itself, Young said there is still much to learn.

Rosbash echoed that sentiment. "The purpose of sleep is something that remains quite mysterious," he said. "While we don't know what it's for, we know it is important."

Editor's Note: This story replaces an earlier, shorter story about the 2017 Nobel Prize in physiology or medicine, which can be found here. For all of Inside Science's coverage of the 2017 Nobel Prizes, go to https://www.insidescience.org/nobel-coverage/2017.