The subterranean rodents have little use for vision, but their magnetic sense tells them which direction is which.
Image 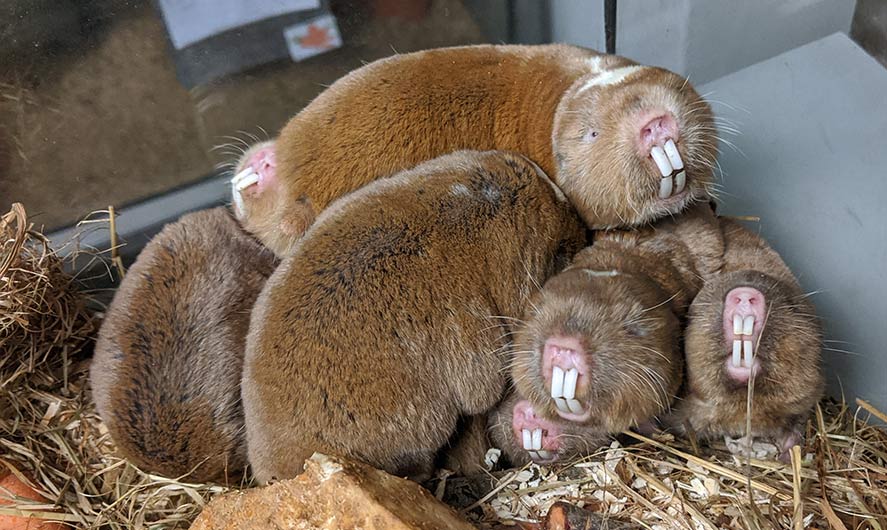 A group of Ansell's mole rats.

(Inside Science) -- The eyes of an African mole rat may not be great for seeing, but they can help it detect magnetic fields, a new study finds.

The ability to sense magnetic fields, known as magnetoreception, is found in all major groups of vertebrates. Despite decades of research, much remains uncertain about the magnetic sense of mammals, including what organs are used.

In the new study, researchers investigated Ansell's mole rat, a nearly blind subterranean rodent from the woodlands of central Zambia. Previous work found these mole rats strongly preferred to build nests in the southeastern parts of circular arenas. Experiments revealed that strong magnetic pulses could disrupt this instinct, suggesting the rodents possessed a magnetic sense. It remains unknown why exactly they prefer the southeast, said study lead author Kai Caspar, a zoologist at the University of Duisburg-Essen in Germany.

Since prior research found the eye is key to magnetoreception in birds, Caspar and his colleagues surgically removed the tiny eyes of mole rats. Blinded and sighted mole rats behaved identically when it came to foraging, socialization and locomotion, revealing that vision was of little use to them for such routine behaviors. However, the scientists found the eyeless rodents built their nests in random orientations, suggesting the eyes are key to helping them detect magnetic fields.

Previous work found that magnetic crystals may exist in these mole rats' corneas, the transparent front parts of the eyes. "You can imagine magnetic particles as being like small bar magnets," Caspar said. "As an animal moves through a magnetic field, these tiny particles will align with that field, and this motion might induce a deformation in neuron cell membranes." Molecules sensitive to mechanical force in these membranes could then detect such activity, he said.

Even if the rodents have magnetic sensors in their eyes, that doesn't mean they can "see" magnetic fields. The cornea is connected to the brain through completely different nerves than the light-sensitive retina, Caspar noted. "There must be some kind of sensation magnetism causes them, but how this feels, we cannot answer, because we don't have this sense," Caspar said.

The scientists detailed their findings online today in the Journal of the Royal Society Interface.