When assessing their enemies, chameleons may be better off looking at color rather than the size and shape of their opponents' bodies.
Image 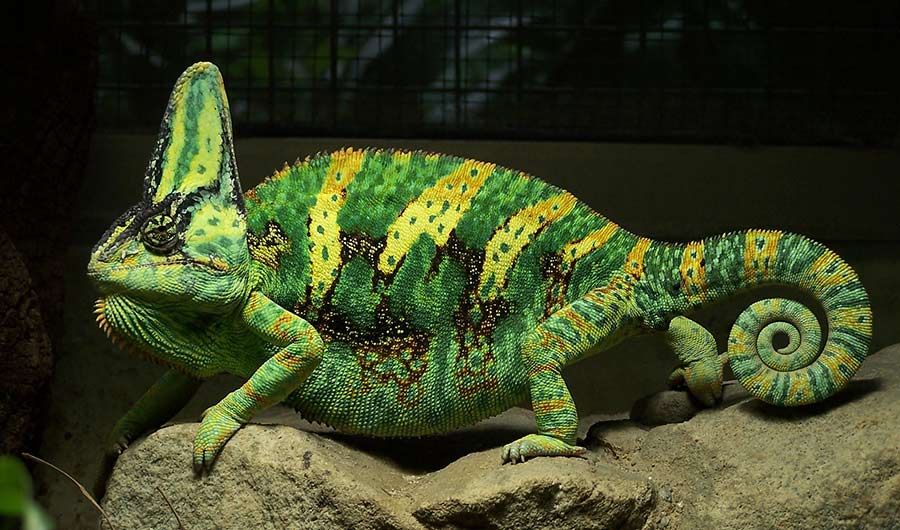 B kimmel via Wikimedia Commons

(Inside Science) -- When a chameleon issues a challenge to another chameleon, he doesn't beat his chest or howl. Instead, he flattens his body into a sort of walking billboard, turns sideways and sways to display warning colors. Now, a new study suggests such warnings contain subtle gradations of meaning: The brighter and more fast-changing the colors, the more the other chameleon must watch out.

More stories from Inside Science on Chameleons, Color and Camouflage

Neutral coloration for a species known as the veiled chameleon consists of shades of green and brown, said Ligon. The males signal submission by turning a dark brownish color, and they signal aggression with yellow stripes on their sides and heads. In a previous study, the researchers found that the brighter the side stripes became, the more likely a chameleon was to approach his opponent; the faster his head stripes appeared, the more likely he was to win.

In the new study, published June 12 in the journal Behavioral Ecology, the researchers presented 33 male veiled chameleons with a "robochameleon" -- a plastic model painted with warning colors and attached to a remote-controlled stand. The stand could slide forward and back, or rotate and waggle to mimic a threat display.

Thirteen of the chameleons challenged the robotic invader by brightening their stripes. Among those 13 challengers, the ones with brighter, more yellow-toned stripes showed more aggressive behaviors such as approaching and attacking the model. The ones that brightened the fastest tended to have the strongest bites.

The chameleons' color changes were better predictors of aggression and bite strength than the length or weight of their bodies, suggesting that a chameleon can get more useful information from his opponent's skin than from his size. That finding meshes well with the observations of Devi Stuart-Fox, a behavioral ecologist at the University of Melbourne in Australia who was not involved in the study.

"If I say, 'There are small aggressive individuals and large nonaggressive ones,' that's just anecdotal," said Stuart-Fox. "It's very nice to see data confirming some of the things that I've suspected from my own experience working with chameleons."

Most people assume that chameleons evolved color-changing abilities primarily for camouflage, but that doesn’t seem to be the case, said Stuart-Fox. Of course, chameleons need to camouflage because they are slow and relatively defenseless. But that could be accomplished with a static color pattern, as it is in most other species.

The color changes are necessary because in addition to hiding from predators and prey, chameleons also need to talk to each other. They can't smell or hear well, so their signals have to be visual, said Ligon. By changing their skin colors, chameleons can temporarily dispense with camouflage in order to communicate.

The communication isn't always about aggression. For example, female veiled chameleons signal their readiness to mate with a bright pattern of greens, yellows and blues. But in the case of the males' yellow stripes, the signal seems to work in much the same way as a songbird's territorial vocalizations.

"I like to think of these color changes as optical songs," said Ligon.