Alterations in the rock formations' growth in Indiana cave could provide clues about past earthquakes in the Midwest. 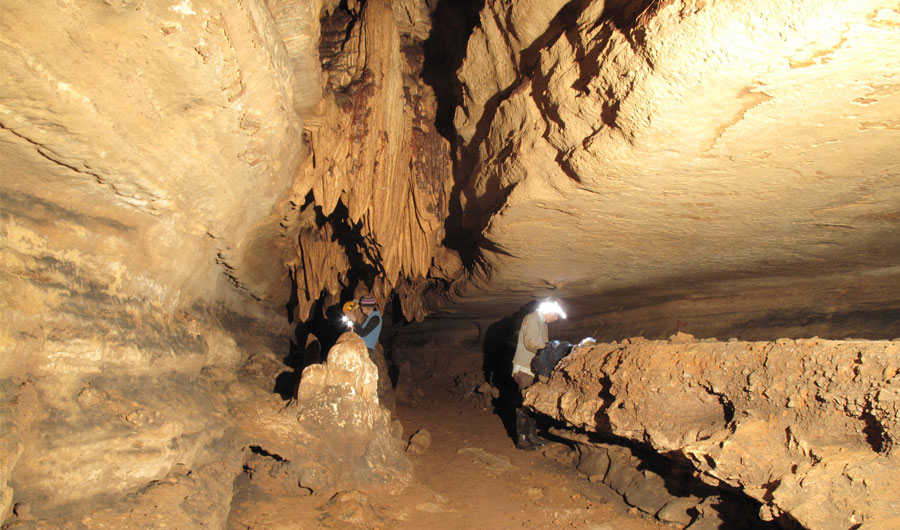 (Inside Science) -- In the winter of 2012, geochemist Samuel Panno picked up his hammer and chisel and prepared to dislocate a stalagmite from the floor of a cave in Indiana. Panno, who is now 67, had already crawled through a narrow passage nearly filled with icy water to get to the spot, and he was determined to collect what he’d come for: special stalagmites that might have borne witness to long-ago earthquakes.

He struck the decisive blow.

Then, "the high-pitched sound of the chisel ricocheted off the other side of this egg-shaped chamber and came back and took out twenty percent of the hearing in my left ear," said Panno who is with the University of Illinois and the Illinois State Geological Survey. "Permanently." His doctor, he said, couldn't believe it.

His hearing loss, it seems, wasn't for naught. In a new study, published tomorrow in the Bulletin of the Seismological Society of America, Panno and his colleagues report that pronounced stops and shifts in the growth of such stalagmites may indicate when past earthquakes occurred.

If the technique holds up, the research could potentially help scientists improve earthquake predictions in areas where little is known about past seismic activity, such as near the Wabash Valley fault system located in the Midwestern U.S. Although the frequency of earthquakes above a magnitude 6, which can cause severe damage, is not well known for the system, seismologists estimate that such quakes occur about every 2,000 years.

Stalagmites grow as water laden with calcium carbonate and other minerals drips from the cave ceiling. The minerals precipitate out of the water and are left behind in layers that, over time, form stalagmites -- sort of like an extraordinarily slow 3-D printer. (On average, roughly an inch and a half to two inches of growth can take between 100 and 200 years.) Stalactites grow from the ceiling in a similar way.

According to the scientists, earthquakes can potentially change that process of growth. The shaking can knock down the stalactites whose drip created the stalagmites, or it can alter or close cracks in the rock from which water seeped.

In the research, the scientists collected four stalagmites from the cavern, known as Donnehue's Cave, in south-central Indiana between 2008 and 2012. They sliced the stalagmites down their center, opening them "like a book" to examine their layers, said Panno. They used a method known as uranium-thorium disequilibrium dating to help identify the age of the stalagmites for different layers and, in particular, when the abrupt shifts in growth occurred.

Of the four stalagmites, the researchers found a twin stalagmite pair, both of which had stopped growing by around 100,000 years ago. The two then started up again around 6,000 years ago, about the time a roughly magnitude 7 quake occurred in the area.

Another stalagmite began growing around 1,800 years ago, again around the time when a magnitude 6.2 quake shook the region. It also revealed stops and shifts in its growth, coinciding with known seismic activity in the relatively nearby New Madrid Seismic Zone that occurred around A.D. 900. 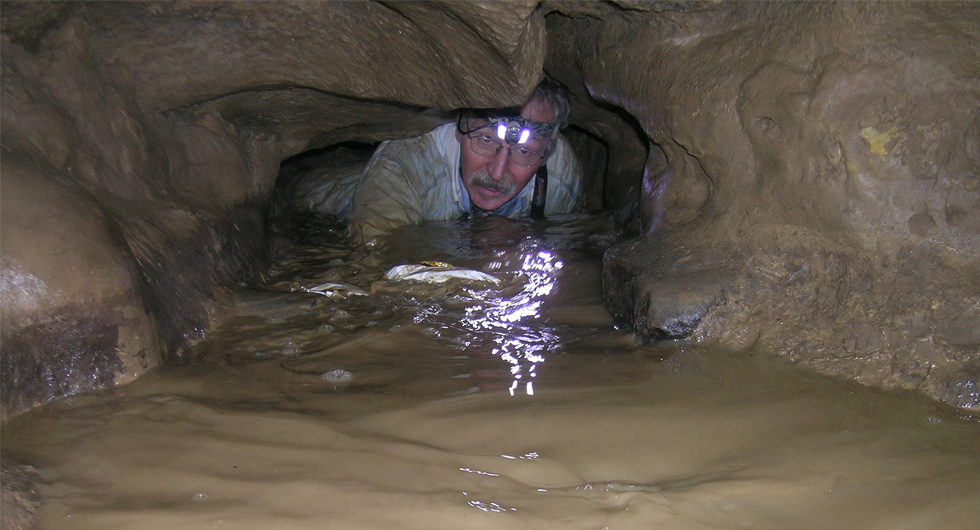 Geochemist Samuel Panno exits a cave chamber after collecting stalagmites and losing a portion of his hearing in the process.

Those older earthquakes, which occurred before records were kept in the region, were dated in previous studies using another technique called paleoliquefaction.

In that process, scientists study how saturated sand deposits -- trapped from streams migrating around over thousands of years -- are shaken by earthquakes and liquefy, sort of how stubborn ketchup behaves after a few vigorous shakes of the bottle. Pressure causes the sand and water to squirt out of the ground like a geyser, killing the vegetation it blankets. Finding and dating those deposits or the dead vegetation can give scientists a timing of the quake.

The problem with liquefaction, however, is that you can only go so far back in time, perhaps around 20,000 years or so, said Panno.

With their technique, "we can potentially date things going back farther than 20,000 years and maybe more than 100,000 years … and maybe see any changes that might have occurred in the seismic history of the area," said Panno.

But other scientists worry that it will be difficult, if not impossible in some cases, to separate out the effects of earthquakes from a host of other potential causes. Animals can knock down stalactites. So can heavy flooding, which can also move stalagmites or block drip paths.

As a result, the new study is on "somewhat shaky ground. Pun intended," said Daniel Doctor, a research geologist with the U.S. Geological Survey's Eastern Geology and Paleoclimate Science Center in Reston, Virginia who was not involved in the study. "But it's still useful. It's just another tool in the toolbox."

The researchers acknowledge the technique's limitations. In the study, they also documented shifts in the stalagmites' growth that overlap with known flooding from melting glaciers during the Pleistocene.

But, they argue, that just means you can't stroll willy-nilly into a cave and start popping stalagmites off the ground. You have to know the cave and be picky about the stalagmites you measure, said Panno.

The researchers are working on strengthening the technique. Panno is now partnering with John C. Tinsley, a retired research geologist with the U.S. Geological Survey in Menlo Park, California, to look for other similar stalagmites. And the two are pairing those stalagmites with related fallen stalactites in the region's caves to see if the timing of a stalactite's collapse coincides with the date of a stalagmite's growth shift, thus making the story more reliable.

Because it'd take a quake of some size to dislodge a large stalactite from the ceiling, the research may even be able to hint at the magnitude of an earthquake or the direction from which it came.

Even though few earthquake disaster movies are set in the Midwest, the scientists say damaging events have occurred, such as the 1811-1812 series of quakes in the New Madrid fault system. Probably around mid-sevens for magnitude, the quakes are still thought to be the most powerful to shake the contiguous United States east of the Rocky Mountains in recorded history.

"Learning how often these things have occurred in the past could help officials know how big of a problem to prepare for in the future," said Tinsley.