Antarctica's Largest Ice Shelf Could Be at Risk of Melting

The Ross Ice Shelf appears to be melting in previously unknown ways. The same mechanisms could be melting other giant ice shelves, too.
Image 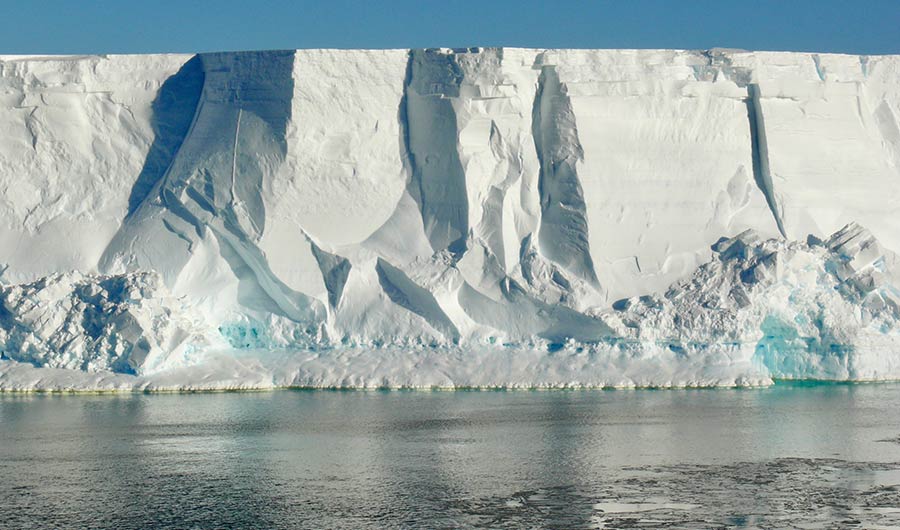 (Inside Science) -- Most of the worry over melting ice in Antarctica has focused on the rapidly melting western shore, where there is enough ice to raise worldwide sea levels by up to 4.3 feet. But new research suggests that the massive Ross Ice Shelf, which has long been considered stable, might be at risk as well -- potentially leading to a slower sea level rise of up to 38 feet as glaciers that were once held back by the shelf slide more quickly into the ocean. The researchers suspect that other crucial ice shelves could also be at risk.

"My primary concerns would be that the potential for melting and collapse of the big ice shelves is not being taken seriously enough," said Laurie Padman, a physical oceanographer based in Corvallis, Oregon who works at a Seattle-based nonprofit called Earth and Space Research. "They're being treated as less important because they are not presently showing much signs of change. But on a 100-year timescale, they have the potential for large changes."

The Ross Ice Shelf is the largest ice shelf in the world. Located on the side of Antarctica closest to New Zealand, it spans an area about the size of Spain and has an average thickness of roughly 1,300 feet. It is one of many ice shelves that extend oceanward from the edge of Antarctica with about 90 percent of their bulk submerged.

Melting of these ice shelves has no direct effect on global sea levels, since the ice is already at equilibrium with the surrounding water. But the ice shelves greatly slow the flow of glaciers on the continent that would otherwise slide faster into the ocean, causing water levels to rise.

The idea that ice shelves hold back grounded ice isn't just theoretical. In 2002, Antarctica's Larsen B ice shelf broke apart in less than a month, and afterward some of the adjacent glaciers sped up by as much as eight times.

The shattering of Larsen B shocked scientists, since no one had previously realized that an ice shelf could disappear so quickly, said Anna Hogg, a glaciologist at the University of Leeds in England. It was triggered by pools of water that formed on the ice shelf's surface. The water leaked into fissures and forced them open in a process known as hydrofracture.

Hydrofracture is one of two mechanisms thought to account for most of the ice loss in the Antarctic. The other mechanism happens when deep, warm ocean currents flow far under an ice shelf, eating away at the "grounding line" where it connects to the land.

That's what's happening to the smaller Amundsen Sea ice shelves on Antarctica's western shore, said Padman. Satellite measurements over the past 26 years have shown these ice shelves sinking, indicating that some are thinning by up to 7 meters (about 23 feet) per year. As a result, the glaciers they support -- which contain enough ice to raise global sea levels by over four feet -- are flowing rapidly into the sea.

A new way to melt

Satellite measurements suggest that the Ross Ice Shelf has been stable for the past few decades, even growing thicker in certain regions. But for the past four years, Padman has co-led a multi-institution collaboration called ROSETTA-Ice to study the Ross Ice Shelf more closely. Last month at the American Geophysical Union meeting in Washington, he presented some of the first findings from several studies that are part of the project.

The ROSETTA-Ice researchers have built a computer model of the interconnected factors that control the Ross Ice Shelf, including seasonal conditions, ocean currents, and the structure of ice and bedrock on the adjacent continent. The model is based on data collected by the ROSETTA-Ice team using instruments mounted on aircraft and on undersea robots.

The findings suggest that a spot on the northwestern side of the ice shelf is melting in a way researchers have not seen before -- neither hydrofracture nor deep currents at the grounding line. Instead, the Ross's problem is seasonal masses of warm water near the ocean surface in front of the ice shelf.

In winter, a crust of sea ice -- far thinner than the actual ice shelf -- covers the ocean in front of the shelf. But in summer, that sea ice melts, and the dark water absorbs solar energy and warms the water beneath. This warm surface water then erodes the northwestern corner of the Ross Ice Shelf, eating away at ice under the lip and causing small icebergs to crumble from its edge.

"What [Padman's] talk showed is that on the Ross Ice Shelf, there are some regions that are showing very high melt rates at the front, by the calving front of the ice shelf, as opposed to the grounding line where we might normally look," said Hogg, who was not involved in the research.

What it means for sea level

The lost ice is currently being replaced by ice flowing down from the continent, so the shelf is not yet getting thinner. But it could easily start to thin as the climate continues to warm, and current projections don't take the processes the ROSETTA-Ice team observed into account, said Padman.

Most of the grounded glacier ice that is being held back by the Ross Ice Shelf is unlikely to melt anytime soon, in part because it is also held in place by the shape of underlying mountains and valleys, said Padman. But the melting corner of the Ross happens to be located right in front of a particularly vulnerable swathe of ice on the continent.

"It just happens to be in the right area where if you did thin the ice shelf, then you would have an effect on the amount of grounded ice coming into the ocean," said Padman.

Even in a worst-case scenario, melting in the Ross won't cause a sudden jump in sea levels over the next few decades, said Padman. But over centuries or millenia, the changes could be massive. The researchers are working to estimate how fast they might occur.

It's possible that other Antarctic ice shelves also have spots that are melting rapidly due to summer surface warming, said Padman. For example, no one has yet looked for such a process on the Filchner-Ronne Ice Shelf, a huge ice shelf currently holding back glaciers that could raise sea levels by about 45 feet if they melted completely.

"We're seeing a new process that we didn't really think was an issue before," said Hogg. "There is no reason why the stuff that they're seeing on the Ross Ice Shelf wouldn't be applicable elsewhere."