Scientists are finding microbes that are good for crops but bad for weeds.
Image 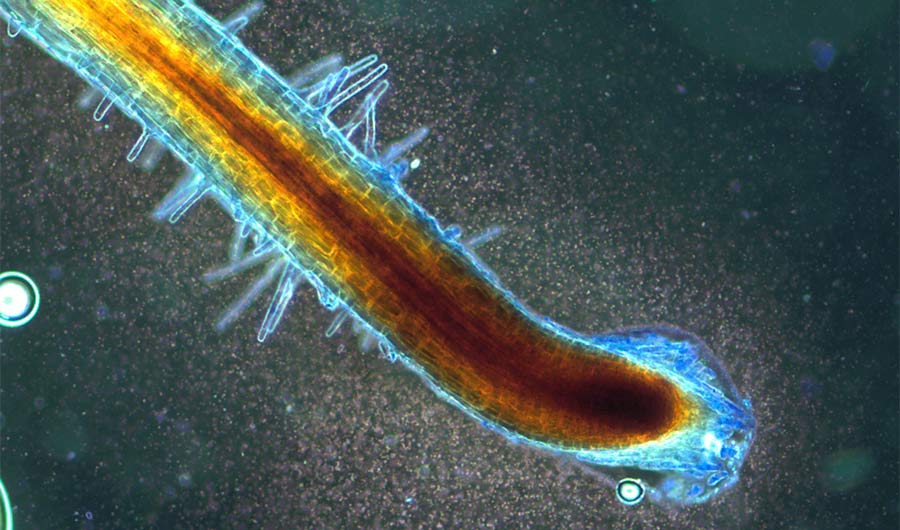 A cloud of microbes converges on nutrient-rich fluids released by a Bermuda grass root tip. Inside the root, the plant uses reactive oxygen (stained brown here) to extract nutrients from microbes that enter its tissues.

This image may be reproduced only with this Inside Science article.

(Inside Science) -- You could call it biological warfare against weeds. But rather than using diseases, researchers are developing ways to disrupt enemy plants' microbiomes. The weapons are microbes that boost the growth of plants we like, while wreaking havoc in plants we don't.

"You could get a microbe that would stimulate that crop, protect the crop from disease and stress, and at the same time inhibit weed plants," said James White, a plant pathologist at Rutgers University in New Brunswick, New Jersey. The approach might also help land managers combat invasive plants in the wild.

Scientists have long known that some plants develop symbiotic relationships with fungi and bacteria, cultivating them in the surrounding soil or in specialized structures in their tissues. For example, soybeans and other legumes grow bacteria called rhizobia in nodules on their roots, and the rhizobia help their hosts by transforming nitrogen into a form plants can use.

But in just the last decade, researchers have discovered that symbiotic microbes also make their way into ordinary root tissues, and even into the plant's own cells, sliding into the space between cell membrane and cell walls. In fact, there is a steady stream of microbes cycling between roots and soil, transporting nutrients as they go.

The bacteria and fungi enter through the tips of roots, then shed their cell walls and morph into new forms. These forms, known as "L-forms" in bacteria and "mycosomes" in fungi, have different growth patterns and appearances than the same species living free in the soil. The plant extracts nutrients from its microscopic guests by dousing them in reactive oxygen, which breaks down the cells.

Many of the microbes bud off into smaller, genetically identical daughter cells before being completely digested. The daughter cells continue up the root, eventually stimulating the growth of root hairs. The root hairs serve as an exit route for any remaining microbes to return to the soil, where they can collect more nutrients such as nitrogen and minerals. Finally, the plant lures in new generations of microbes by excreting fluids rich in carbohydrates, proteins and vitamins.

White's team and their collaborators at the U.S. Geological Survey have conducted much of the research on this process, which they call the rhizophagy cycle. The cycle appears to be ubiquitous, occurring in all of the roughly 50 plant species they have studied so far.

But no one knew about it until a few years ago, largely because they couldn't see what happened to microbes inside roots, said Mark Ritchie, an ecologist at Syracuse University in New York, who was not involved in the research. White's team solved that problem by staining the plant's reactive oxygen molecules brown, making microbes visible under a microscope as they are digested.

"In the past, people would see that there's single-celled microbes sitting in the root, but they wouldn't really have any idea what the function was," said Ritchie. "[White] was able to show that the bacteria seem to represent these sort of packets of nutrients that would flow in and out of the root."

One plant's blessing, another plant's curse

At the Ecological Society of America meeting in New Orleans last month, White presented a new wrinkle: The microbes that are good for one plant may be bad for another.

The researchers isolated more than 100 species of bacteria and fungi that naturally live inside plants. They grew the microbes in a nutrient broth, then poured the broth over different types of seedlings. They found that about 80 to 90 percent of the microbes boosted growth in many types of plants, while 10 to 20 percent were beneficial only in the plant species they were originally found in, said White.

In plants that weren't their normal hosts, the specialized microbes still traveled through the rhizophagy route White helped uncover. They didn't invade other tissues or cause lesions, as one would expect from a disease. But they proliferated out of control, stunting the seedlings' growth and making them less likely to survive.

For example, one type of rhizophagy cycle bacterium, Micrococcus luteus, was originally found in tomatoes. When the researchers added extra M. luteus to tomato seedlings, the plants grew even better than usual. But when they tried it on nine other types of plants, the seedlings turned out sickly and small.

Even Japanese knotweed, dubbed one of the world's worst invasive species by the International Union for the Conservation of Nature, was helpless before M. luteus. Colonized knotweed seedlings had roots less than half as long as normal, and they died 32 percent more often.

"It just ate up the Japanese knotweed," said White. "The bacteria came out of the seedlings and formed these white pools all around." 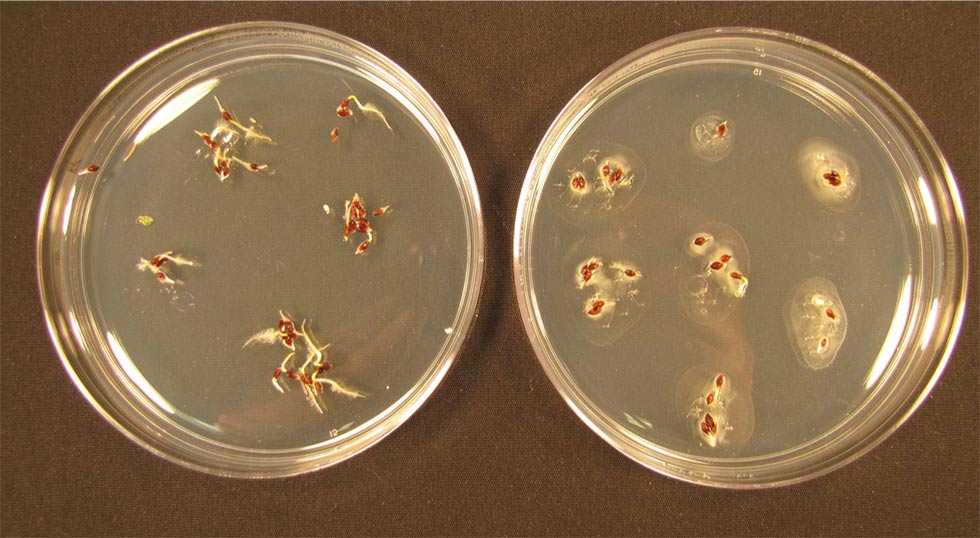 Invasive Japanese knotweed seedlings grow in petri dishes on agarose gel. The seedlings on the right are colonized by Micrococcus luteus, a type of bacterium that boosts growth in tomatoes but stunts growth in other types of plants.

Rights Information: This image may be reproduced only with this Inside Science article.

A weapon against weeds

Farmers are already using microbes in agriculture, but the products designed so far are meant only to help crops, not to harm weeds, said Rusty Rodriguez, a microbiologist and CEO of the agricultural probiotics company Symbiogenics, who was not involved in White's research. The new findings suggest that some microbes might be able to do both at once.
"If it colonizes both, and the weed is inhibited but the crop plant is promoted, then we may have a situation where the microbe can essentially take the nutrients from these competitor weeds and then carry them back," said White.

Right now it's only a concept, White cautioned. The researchers still have to find the right microbe species and develop ways to deliver them. They will also have to evaluate the effects on nontarget plants and animals, ensuring that the products are safe for the environment.

Nevertheless, the concept seems promising to Michelle Afkhami, an ecologist at the University of Miami in Florida, who was not involved in the research. "It's an interesting idea that I think could work," she said.

And the need is great, said Rodriguez. Herbicide-resistant weeds are overtaking farmland, and invasive plants are choking out native habitats across the globe. Our usual ways of fighting such plants are crude -- poison them, burn them, or tear them out. Microbes could offer something new.

"It's creating a microbiome that really favors the crop over competitors," said White. "There's a whole world down there that we don't know much about."