Evidence for a new kind of stellar explosion 7 billion years ago.
Image 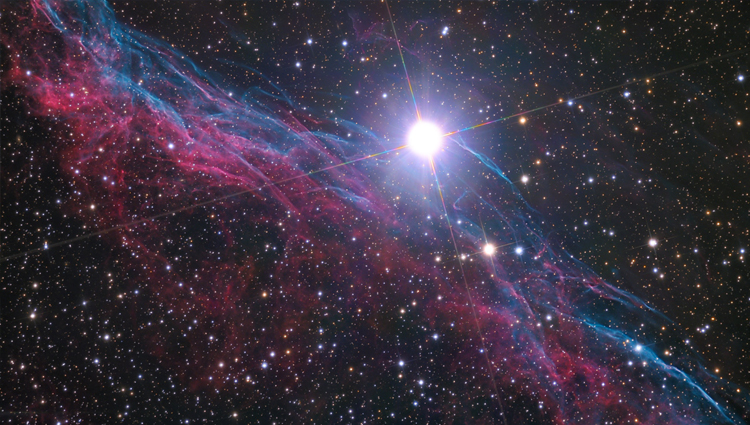 WASHINGTON (ISNS) -- Astronomers meeting in Washington last week announced that a recent search for bright exploding stars -- commonly called supernovas -- found something quite unusual: antimatter.
Usually stars like our sun are powered by fusion reactions in which the nuclei of two atoms fuse together to form a heavier nucleus. In Y-155, a star in the constellation Cetus, the astronomers argue that another process was crucial: the making and unmaking of antimatter particles.
In all stars a titanic struggle takes place between gravity, which wants to draw matter toward the center of the star, and the pressure of nuclear interactions, which tends to keep the star inflated as if it were a balloon. Only when the star uses up all its internal fuel, causing the nuclear reactions to slow down, does gravity start to win out. The resulting gravitational collapse is what causes the star to explode. When a star dies in this way, as a supernova, it often spews matter into space and can be brighter than its host galaxy, at least for a short time. Astronomers love to study such supernovas since they say a lot about the inner mechanisms of stars and also provide a yardstick for determining how far away the star was.
Notre Dame astronomer Peter Garnavich reports that what makes Y-155 different is its mass, an estimated 200 times heavier than our sun. With such a large mass, the pressure at the core of the star is so great that the light released in nuclear reactions is capable of creating new particles, electron-antielectron pairs. The creation of these particles actually hastens the collapse of the star and its eventual explosion.
The idea of a supernova triggered by the creation of antimatter has been around for only about 40 years, Garnavich said, but the observational evidence is sparse. In the case of Y-155 the signature light cast out after the explosion was odd: most supernovas send out higher-energy blue light first followed by cooler red light, but in this case the red light came first then the blue. That and the much larger amount of radioactive nickel shooting outwards compared to common supernovas led the researchers to suspect that antimatter was involved in triggering the explosion.
Garnavich is part of a team of scientists participating in a project called ESSENCE. Using a 4-meter-wide telescope mirror at high altitudes in Chile, the scientists observed 200 of the most explosive type of supernova. Y-155 was the most explosive of them all.
The Keck Telescope on Hawaii was directed at Y-155 so that an accurate spectrum -- that is, a summary of all the light coming from the star--- could be recorded. This allowed the distance to the star to be determined. At a distance of 7 billion light years, this star lies about halfway back in time toward the origin of the universe.
Garnavich reported these results at a meeting of the American Astronomical Society last week in Washington, D.C. He said that because of its size and powerful emission, Y-155 might resemble the first generation of stars in the universe. Another ESSENCE scientist, Alex Filippenko of the University of California, Berkeley, said that the antimatter-supernova mechanism might be important in locating these first stars.
Filed under
Space
Physics
Author Bio & Story Archive