Fifty years ago, an explosion changed the flight of Apollo 13 into a saga of skill, fortitude, and resilience. A reporter who covered the mission recounts the details.
Image 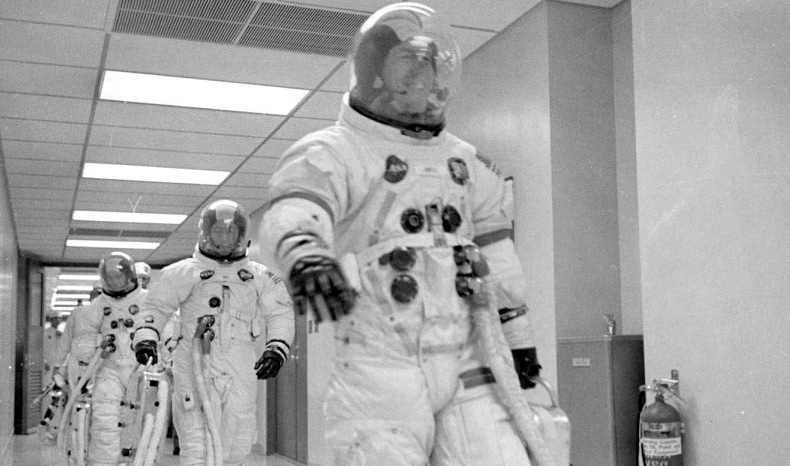 The Apollo 13 astronauts before the launch.

(Inside Science) -- At first, it all seemed routine.

On Saturday April 11, 1970, I was sitting in the press bleachers at NASA's Kennedy Space Center watching my seventh manned Apollo launch in seven months, the fifth lift-off of the mighty Saturn V rocket, and the start of the third journey to the lunar surface.

That afternoon, the lift-off of Apollo 13 went smoothly. So did the injection from Earth orbit towards the moon. Indeed, NASA officials were starting to worry that the American public might soon get tired of manned lunar exploration.

But two days later, everything changed.

An explosion in an oxygen tank in the flight's service module created a drama that resounded worldwide for four days.

A combination of basic physics, engineering adaptability, professional coolness under pressure, and sheer luck saved the three astronauts aboard the stricken craft. The process burnished NASA’s reputation at the time as a government organization capable of learning from and overcoming any mishap. Sadly, two fatal failures of the space shuttle program that followed Apollo sullied that reputation.

If you're under 55 years old, it’s likely that you gained your main exposure to the saga through the 1995 film Apollo 13 that featured Tom Hanks as crew commander Jim Lovell; Bill Paxton as Fred Haise, who was to pilot the Lunar module, named Aquarius, down to the moon's surface with Lovell; and Kevin Bacon as Jack Swigert, whose intended job was to orbit the moon alone in the mission's command module, Odyssey, during the landing and moonwalk. Haise and Swigert (replacing astronaut Ken Mattingly, who had been exposed to rubella two days before lift-off) were on their first space mission.

The film presents a reasonably accurate account of the events. But for me it doesn't match the extraordinary tension that I perceived, albeit indirectly as a science writer for Newsweek.

The explosion occurred at 10:08 pm EST on Monday April 13, a few minutes after Lovell signed off from a televised tour of Odyssey. Swigert had started a routine process to stir up the gas in a tank in the command module attached to Odyssey when the astronauts felt "a short bang and vibration."

"I believe we’ve had a problem here," Swigert radioed to mission control. "Houston, we've had a problem," he added when asked to repeat the information.

The movie had Lovell voicing a slightly different phase: "Houston, we have a problem."

A few minutes later, Lovell looked out of the window, saw a gas leakage, and realized that the craft had lost both its oxygen tanks.

The flight's purpose had changed in an instant from a lunar landing to a rescue mission with a dubious chance of success.

Within two hours, mission controllers devised the outline of a plan to boost that chance.

The three astronauts would power down Odyssey and use the two-man Aquarius as a "lifeboat" until returning to Odyssey for the fiery plunge to splashdown through Earth's atmosphere.

Before returning to Earth, Apollo 13 would loop around the moon and use lunar gravity to supplement the craft’s dwindling fuel supply and set it on course for Earth.

An unexpected piece of luck facilitated that plan. Early in the flight, mission controllers had changed the spacecraft's course slightly to improve visibility for the planned lunar landing. Without that change, Lovell recalled in a recent interview with Astronomy Magazine, "we would miss the Earth completely and we'd end up in a long elliptical orbit, going back out to where the moon was, back to where the Earth was, back to the moon."

At the time, Newsweek's editors had a story conference every Tuesday morning to determine the likely stories for the magazine issue due out the following Monday. We had expected the flight to have some prominence, but not to feature it on the cover.

The news of the spacecraft's explosion changed that. Apollo 13 would make the cover. But which of writer Rudyard Kipling's two imposters – triumph and disaster -- would make the headline?

Our reporting team of George Alexander, Kent Biffle, Evert Clarke, and myself followed the action at Mission Control in Houston, interviewed NASA personnel and contractors, former astronauts, and any other experts available by phone, and kept watch on the television coverage.

Unlike today's reporters, we had the luxury of waiting for the end of the week to write the story -- no need to issue hourly bulletins over the next three days as the flight sped to its conclusion. But undertaking the reporting for the cover story – including the astronauts' biographies for possible obituaries – consumed much of our waking hours.

NASA personnel and contractors had little time to sleep. For three days they focused intensely on calculations, simulations, and communications, all with much less computing power than a modern smartphone contains.

The astronauts had to adjust to extreme discomfort. Built for two, Aquarius had scarcely enough space for three. As carbon dioxide started to build up dangerously in the craft, they used duct tape, tube socks, hoses from spacesuits, and a bungee cord to jury-rig a device, developed and checked on the ground, that reduced the level of the gas.

The trio was also getting colder as the flight went on, with the heat cut off to conserve power for path changes. Because Aquarius needed liquid to keep its hardware cool, they drank little water. Worse, they faced a question that could only be answered when they reached Earth’s atmosphere: Had Odyssey’s heat shield been damaged by the explosion? If it had, the module could burn up during the descent.

The test arrived on the morning of Friday, April 17, when Odyssey prepared to reenter Earth’s atmosphere after jettisoning the service module and Aquarius.

Any reentry involves a loss of communications between mission control and the spacecraft crew. Although telemetry immediately confirmed that the heat shield had worked, controllers waited for radio confirmation that the crew had survived.

NASA had calculated that the blackout would last four and a half minutes. Five minutes passed. Then five and a half. Finally, six minutes into the blackout, Swigert's voice came through.

Odyssey splashed down in the South Pacific at 1:08 pm EST. Three-quarters of an hour later the three astronauts boarded the recovery ship Iwo Jima, completing what commentators called a "successful failure."

The saga revealed a great deal about NASA's resourcefulness half a century ago. The astronaut corps spent hours in a flight simulator working on solutions to situations as they arose during the flight. Ken Mattingly, who didn't contract rubella, played a key role in the simulations.

Preparations for the unexpected also helped. Flight controllers had previously developed procedures for the unlikely event of the lunar landing craft's use as a lifeboat. Actions that NASA had taken after the Apollo 1 fire that killed three astronauts in January 1967 ensured that the Odyssey command module powered up safely as the crew prepared for the final phase of their return to Earth. That approach continued after the successful splashdown. A two-month investigation that revealed the cause of the accident – a short circuit in an oxygen tank – allowed engineers to redesign the system for a successful Apollo 14 mission less than nine months after the incident.

I had long left Newsweek in 1995, when the magazine editorialized that Apollo 13's rescue rebutted the then-prevalent dismissive view of the value of government bureaucrats in times of trouble. Today, the entire world faces a slowly developing threat that comes not from a mechanical fault but from Mother Nature. Does the example of NASA's successful failure suggest how we might approach this problem?

From my point of view, acceptance that unknown events can well occur is plainly critical. That acceptance should lead to preparation for imagined, although highly unlikely, happenings. Equally important is a cadre of individuals with deep knowledge about the subject matter -- whether spaceflight or a rogue virus – that enables them to dream up out-of-the-box solutions when disaster strikes. And perhaps most important is an organizational approach that Kipling touted in his poem If: to "keep your head when all about you are losing theirs and blaming it on you." Fifty years ago, NASA exemplified that attitude. We can hope that governments worldwide do so as they battle the coronavirus.