Arctic Warming Could Be Blamed For The Weird Weather 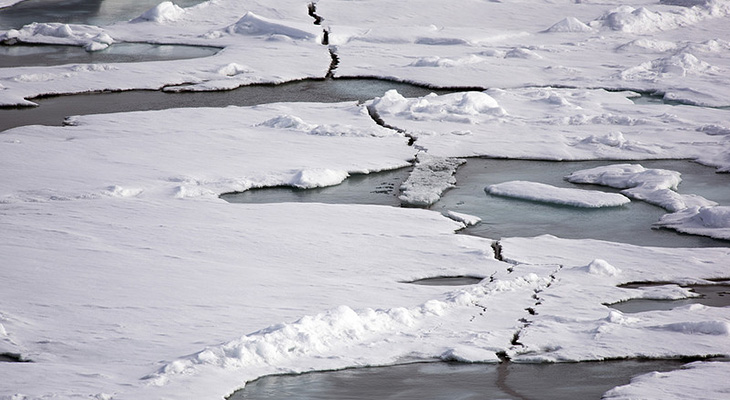 (Inside Science) -- One day last month, at a meeting of the Society for Marine Mammalogy in San Francisco, a prominent climatologist explained how the warming of the Arctic, which was greatly affecting the animals the mammalogists study, could be driving the weird weather occurring around the world.

Several blocks away at almost the same time, at the American Geophysical Union meeting, another prominent climate scientist told geologists and geophysicists that the science really isn’t so sure what's causing the recent spate of weird weather.

To some scientists the weird weather is just part of natural fluctuation, said Judah Cohen, director of Seasonal Forecasting at the Massachusetts Institute of Technology, in Cambridge, who gave the AGU talk. They believe if the climate gets warmer in the Arctic, it gets warm all over. He disagrees.

"When it gets warm in the Arctic, more often than not, it cools the continents," he said.

When the computer was invented in the 1940s, the inventors believed one of the first uses would be predicting weather and climate. They underestimated how complex that problem was. Now scientists trying to develop climate models that mimic the Earth's weather use supercomputers and still have difficulties.

One thing has been sure: Things have been weird in the Arctic. According to the Arctic Report Card issued last month by National Oceanic and Atmospheric Administration, the maximum extent of sea ice in 2015 occurred on Feb. 25, earlier than average, and the minimum ice extent in September was the fourth lowest on record. The ice continues to get younger and thinner, the report said.

All that has profound effects on the marine ecosystem.

Temperatures between October 2014 and September 2015 were more than 5 degrees F above average over much of the Arctic, while temperatures over land in the North averaged 34.34 F, the highest since 1900. The Arctic was warming twice as fast as any other place on Earth.

Sea surface anomalies occurred all over the region. The most extreme--and dangerous--occurred in Greenland where melting occurred over more than 50 percent of the ice sheet. Glaciers flowing into the sea retreated, but more slowly since 2012.

This may all be reflected in the mid-latitudes. Last year, a phenomenon called the polar vortex brought record-breaking cold weather to parts of the US, with sub-zero double-digit temperatures as far south as Virginia.

Temperatures last month were record-breaking in the other direction all over the American East, reaching 72 degrees F in New York City on Christmas Day, almost as high as it got on the Fourth of July 2014. Surfers were out at Rockaway Beach.

A massive storm last month, created when warm air sailed into the northern latitudes from the Atlantic, brought hurricane-force winds to Iceland, one of the worst storms in a century. One wind meter registered 160 mph.

Huge flooding struck the United Kingdom when that storm moved further east, producing the heaviest downpour on record in the Lake District -- one month's worth of rain in a single day. Homes were flooded, power knocked out. Climatologists called it a "bomb cyclone" because atmospheric pressure plunged more than 24 millibars in 24 hours.

Temperatures at the North Pole approached freezing, 50 degrees above normal.

A blizzard buried the Southwest, killing thousands of dairy cows, perhaps as many as 35,000 or 10 percent of the cows in West Texas.

Unseasonable and fierce tornados struck the central part of the U.S. in December causing billions of dollars in damages. Seventy-four tornadoes were recorded in Texas in 2015, killing 10.

A Pacific weather system, dubbed the Godzilla El Niño, dumped a deluge on California, even turning the usually docile Los Angeles River into a raging torrent.

According to Jennifer Francis, research professor at the Institute of Marine and Coastal Sciences at Rutgers University in New Brunswick, N.J., who addressed the marine conference, when the temperature difference is large, as in the wintertime, we tend to get a very strong jet stream; when that difference is small, the jet stream gets weaker. As that happens, it gets more easily deflected on its west-to-east path into north-south waves, which tend to move more slowly.

The result, she said, are bigger or more frequent weather patterns which become more "persistent." The long-lasting California drought is an example. The unusual stormy weather last year was another.

All the phenomena -- El Niño, the polar vortex, the jet stream -- are intertwined and no one agrees by how much. Cohen said he was speaking on behalf of a scientific working group created to study the situation and that some of its members think the changes in weather patterns are more "noise" than a real phenomenon.

Cohen predicts much colder weather is coming to the U.S. and the Arctic this winter.