Are You Safer From Tornadoes In A Valley? 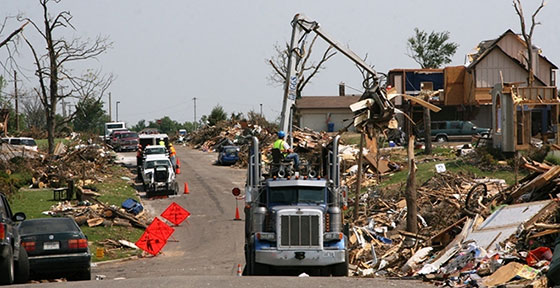 (Inside Science) -- Scientists at the University of Arkansas -- a state where tornadoes are a serious matter -- believe that in at least some circumstances, tornadoes cause greater damage going uphill and deliver less destructive power going downhill.

The implication is that lower elevations may be safer than higher ground, and buildings can be constructed accordingly.

The study, presented at the American Conference on Wind Engineering in June, provoked an immediate and public controversy.

The research by R. Panneer Selvam, a professor of civil engineering, and his graduate student, Nawfal Ahmed, in Fayetteville, was based on aerial photos taken after two major tornadoes that struck different cities in 2011.

They used National Oceanic and Atmospheric Administration images at Tuscaloosa, Ala., a day after an April 28 tornado, and 16 days after the May 22, Joplin, Mo., incident, and overlaid them over Google Earth photos to show before-and-after images.

The Joplin tornado was rated at EF5 on the Enhanced Fujita Scale, the highest realistic measurement of destructiveness with winds of more than 200 mph. One-hundred fifty-eight people died in the incident, and damage was estimated at $2.8 billion, the costliest tornado in American history.

The Tuscaloosa event was an EF4, with winds of 190 mph. Sixty-four died in that tornado, and damage was estimated at $2.2 billion.

Upon studying the images, the researchers reported that "a hill can act as a protection wall for buildings located on the leeward part of the hill."

They reported that the photos showed less damage on hill slopes on the leeward sides; that tornadoes seem to favor higher elevations and move in that direction when they can, and, most controversially, in areas with hills and valleys, tornadoes will skip over the valleys and concentrate the damage on the hills.

That would be good to know if true, because "every place in the world that has flat land has tornadoes," Selvam said.

The study, reported in a press release from the university (the study has not been peer-reviewed or published), provoked an instant backlash, including a televised debate between Selvam and a local television weatherman.

"I don’t want people to think they are somehow safer in a valley and not take the proper precautions," said Dan Skoff, of KNWA and FOX 24, both television stations in northwestern Arkansas. Skoff, who also is a storm chaser, has a degree in meteorology from the University of Oklahoma in Norman.

In the debate, Skoff pointed out that Selvam studied only two tornadoes and it is irresponsible to make general statements based on so few examples. Further, there are other examples of tornadoes that had different damage patterns.

In one anecdote, Skoff described the death of a 50-year-old woman who died when she, according to neighbors, did not take the proper precautions or take shelter, thinking she was safer in a lowland home. There were multiple examples of tornadoes that were damaging at all elevations.

Skoff said it is a common misconception that people think they are protected from tornadoes in valleys. He was particularly upset by the notion that the tornadoes skip around hills.

"This is exactly what we don’t need in this area is for people to get complacent, to think that tornadoes can’t get down into ravines and valleys," he said.

Paul Markowski, a professor of meteorology at Penn State, agreed with Skoff.

"I have no doubt that terrain and land surface characteristics affect tornadoes (it's virtually a truism that it does), but I'm extremely skeptical of an ability to generalize terrain's effects, and I think we're nowhere close to being in a position to suggest new building practices as a result of what we've learned from a couple of tornadoes."

He said there were too many factors that affect the path of destruction, besides elevation. For example, slope, intensity and motion of the storm, whether there are trees on the slope or corn.

"I don't think we're close to knowing the answers to any of these questions at this point, though it's an interesting idea that we might someday be able to engineer landscapes to mitigate tornado damage to valuable assets," he said.

Selvam admitted that two tornadoes were not sufficient to draw widely applicable conclusions but he could not get funding for further study. He said his findings were general and did not get into the specifics or the geography of the hills. He traced only the damage in these two tornadoes and that is what he found.

"You cannot make the general statement, you are surrounded by hills, you are fine," he said. "No. Valleys are a complicated issue."