New findings suggest the famous geyser went dormant during a period of severe droughts -- a condition that could recur in a warming world.
Image 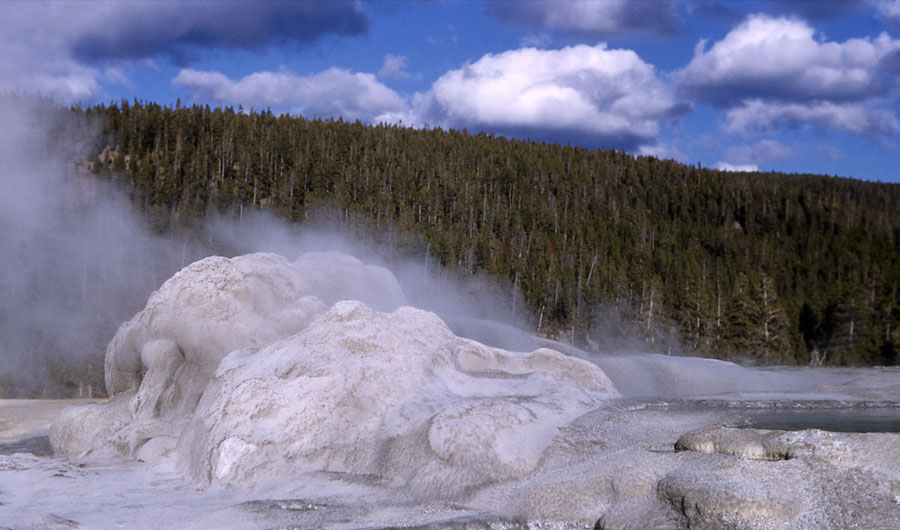 (Inside Science) -- One of the most famously reliable geysers in the world may have taken more than a century off duty during medieval times, new research finds. Scientists recently recovered mineralized tree pieces dating from around A.D. 1230-1360 from the mound of Old Faithful geyser in Yellowstone National Park, suggesting the geyser stopped erupting long enough for the trees to grow.

"Old Faithful is likely thousands of years old," said Shaul Hurwitz, a research hydrologist with the U.S. Geological Survey, who is an author on the new paper. "We found root crowns high up on the mound, and that means that when the trees grew the Old Faithful mound had about the same structure as it has today." 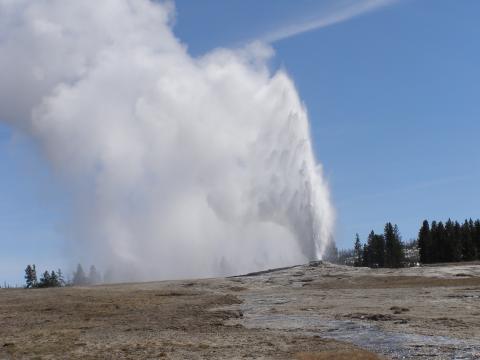 Old Faithful draws throngs of visitors each year who count on it to routinely put on a spectacular, water-spewing show. The geyser’s reputation for reliability goes back at least 150 years, when members of an expedition led by Surveyor-General of Montana Henry Washburn and Montana politician and businessman Nathaniel Langford first dubbed it Old Faithful. The geologist Ferdinand Hayden, who led a subsequent scientific expedition in 1871, wrote of Old Faithful: "It has been called the Guardian of the Valley. It is so regular in its operations and they occur so frequently that it has afforded unusual facilities for observation."

Yet many of Old Faithful’s visitors may not realize the precise balance of heat and water required to keep the geyser regularly ejecting a fountain of hot water and steam from its intricate underground plumbing.

"The way I try to explain it is that if you have a lot of water compared to the amount of heat, you end up with a hot spring. And if you have a lot of heat compared to water, you end up with a fumarole, which is a hissing steam vent. In the middle, you have this delicate balance between the amount of heat and the amount of water, and the geyser will only erupt when it gets the required amount of each of those," said Susan Kieffer, a geologist who started studying Old Faithful in the 1970s and was one of a group of researchers who in 1991 lowered a camera into the geyser’s vent to see what was going on.

When Old Faithful went dormant hundreds of years ago, it was probably the water part of the equation that was thrown out of whack. The geyser stopped erupting toward the end of the so-called Medieval Climate Anomaly, a time when many locations around the world experienced prolonged periods of warm, dry weather.

"It’s the time when we have things like grapes growing in Northern England and a loss of sea ice that allowed people to discover Greenland," said Cathy Whitlock, a paleoclimatologist at Montana State University in Bozeman. "We know in Yellowstone it was both warmer and drier. The upper tree line was higher up the slopes and there is evidence of more fires during that period." Stream flows were also lower, she added. Extreme droughts in the region lasted for decades. 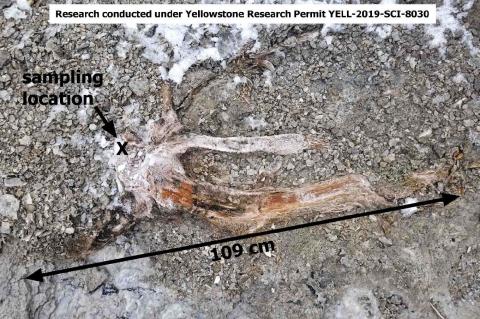 One of the wood samples found on Old Faithful.

Hurwitz and his colleagues compared the ages of the mineralized tree remains they recovered from Old Faithful with a record of stream flow in the Yellowstone area reconstructed from tree-ring data. They found that the ages of the trees coincided with a series of severe droughts.

Researchers have also found that earthquake-caused changes in the ground can alter geysers’ eruption intervals (and are likely one of the main reasons that Old Faithful now erupts on average every 94 minutes, compared to intervals of around 60-65 minutes in the 1950s.) However, Hurwitz and his colleagues found no evidence of significant earthquake activity around the time of Old Faithful’s dormant period, so the researchers concluded the dry climate probably caused the hiatus.

These days, the Yellowstone region is again experiencing droughts, this time most likely linked to human-caused global warming. In 2008, Hurwitz and his colleagues published a paper showing that years with lower precipitation at the end of the 20th century and beginning of the 21st century had likely added a minute or two to Old Faithful’s eruption cycle. It’s possible the geyser could shut down completely if the climate continues to dry.

The new research "ties the behavior of Old Faithful to climate projections which should be of great interest to the Park managers," said Kieffer in an email. "It is a careful piece of work that looks intriguing and important."

A paper detailing the new findings was published online yesterday in the journal Geophysical Research Letters.