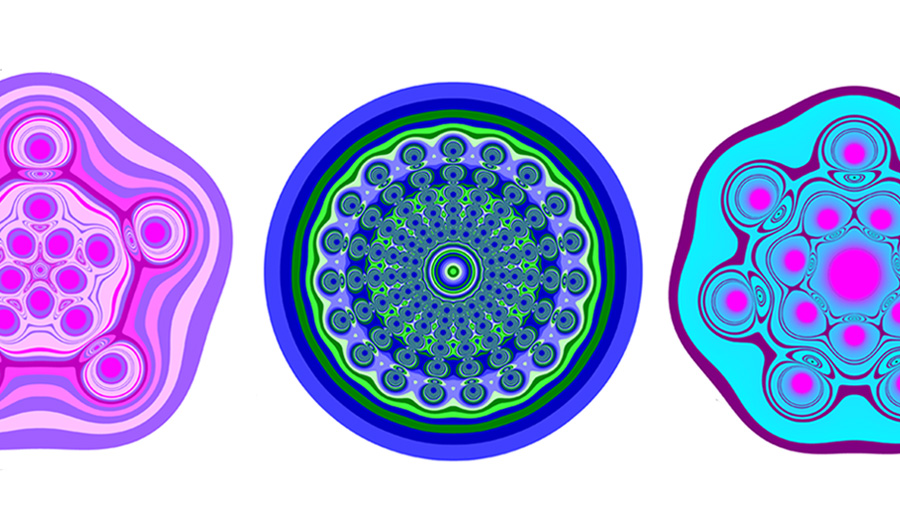 The computer-generated artwork above reveals the symmetry of Newton's laws of motion and gravitation.

(Inside Science) -- About 350 years ago, as the story goes, an apple fell near British physicist Isaac Newton and planted the seeds of the laws of motion. Now, in celebration of the anniversary, retired math teacher Stan Spencer has borrowed what Newton learned to create art from simulated rocket motion and get others interested in understanding science.

"I tend to have a sort of crazy idea like that and then go for it," said Spencer, who lives in Nottinghamshire, England. He is one of several hobbyists and researchers creating art from science concepts.

After the apple incident, Newton started thinking about how objects in the universe move. He came up with four rules, or laws, for motion and gravitation still taught in high school physics classrooms today. They help explain how Earth's gravity pulls apples to the ground or GPS satellites into orbit.

In particular, Newton found that bodies with mass appear to tug at one another. The force of those tugs grows stronger as masses and accelerations increase or as distances get shorter. Ever curious, he formulated equations that describe the strength of this invisible force.

Newton's laws start breaking down when explaining motion near the speed of light and the behavior of very large or very small, atom-sized, objects.

"But he's good enough to get you to the moon and back," Spencer said.

In his work, Spencer visualized the motion of a rocket, which can use the gravitational pull of nearby planets to save expensive fuel. Each planet's gravitational force can guide a spacecraft so that it arrives at its destination more quickly and efficiently than it would if traveling only by its own power.

To make the visualizations, Spencer set up digital circles in symmetric patterns representing rings of planets around a sun or stars in constellations. He used equations to tell his computer how to simulate what happens as the circles' forces pull on a lineup of digital rockets.

Spencer simulated the paths of rockets around planetary bodies, according to Newton's laws of motion and gravitation.

The setups aren't a particularly practical application of Newton's laws for a spaceship, explained Spencer. "But, you know, you might get some interesting pictures out it."

In the simulation, each pixel on the screen represents a rocket zipping through space. The simulated forces of planets and stars push the rockets around, one by one, until eventually the rockets fly off the screen or land on a body with mass. Their starting positions get a color based on the mass they hit.

Then, depending on how long it takes to reach the destination, the color would be a different shade. For example, if it took a short time to arrive, then the shade would be light green. If it took a long time, then it would be dark green. 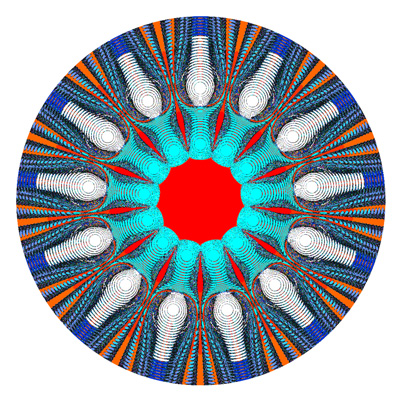 "The pictures -- they were a surprise, really," he said. "I didn't know what was coming until it came."

He presented the research at the annual Bridges Conference on mathematics and art in Jyväskylä, Finland, on August 10.

"I see that very much as something that could be used on a high school level as an exercise and as a motivational, inspirational example," said Andres Wanner, a physicist and digital artist at the Lucerne University of Applied Sciences and Arts in Switzerland. He was not involved in the study.

"It shows the symmetry of physics laws, which is something that non-scientists often miss because it's buried in the math," said Elizabeth Freeland, a physicist at the School of the Art Institute of Chicago who was also not involved in the study.

She said she would share the work with her art students, who might get inspired to explore similar projects with some help.

"Seeing somebody land on the moon isn't going to turn you into an astronaut,” Freeland said. "But it might make you say, hey, I want to learn more about that."

Spencer said the next step of the project is to experiment with randomly placed, not symmetrically arranged, circles. He's also continuing to explore other art visualizations from math and physics.

"If it encourages people to ask the questions," he said, “then to some extent you’ve created interest."