A team of scientists develop a model that describes the accelerating expansion of the universe without the need for mysterious dark energy.
Image 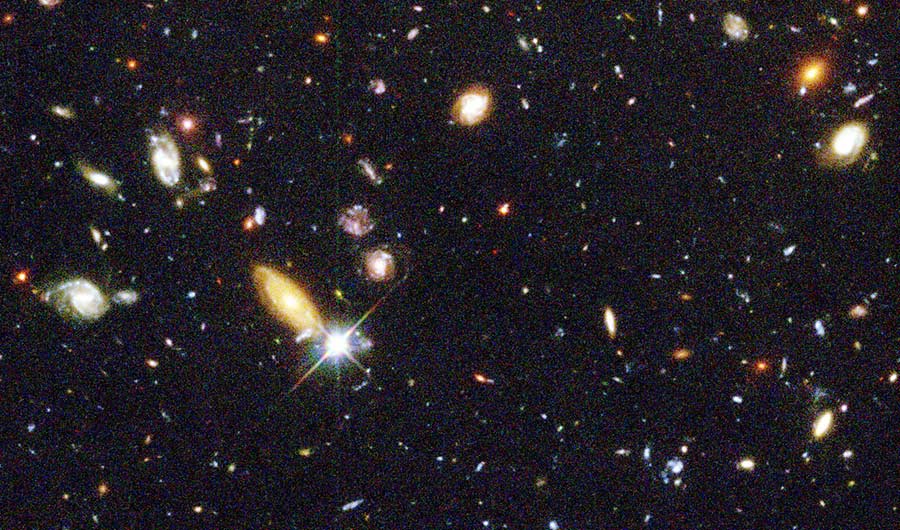 A portion of the Deep Field image from the Hubble Space Telescope, 1996.

(Inside Science) -- Dark energy, the hypothesized but unconfirmed entity thought to propel the expansion of the universe, has puzzled astrophysicists since the 1990s. Its subtle effects are even harder to detect directly than those of dark matter. Now some scientists are developing alternative ways to understand the universe's expansion and proposing to dispose of the concept of dark energy altogether.

In a new study, they ask the question: is it possible that the formation and arrangement of galaxies throughout time has somehow affected how the universe has expanded since the Big Bang 13.8 billion years ago? In a simulated universe in which this happens, it turns out to be possible to reproduce the latest measurements of the expansion rate gathered by the European Space Agency's Planck space telescope.

“It’s exciting to try to solve the biggest observational puzzle in science right now,” said István Szapudi, astronomer at the University of Hawaii in Honolulu and one of the lead authors of the study, which is being published in the Monthly Notices of the Royal Astronomical Society. “Unlike dark matter, for which we have many specific theories that make sense, for dark energy, it’s the ‘biggest blunder’ in physics,'” he adds, referring to Albert Einstein’s assessment.

According to the standard model of the origin of the cosmos -- which this study, if confirmed, could upend -- dark energy makes up about 68 percent (and rising) of the total energy density of the universe. In comparison, normal matter, the stuff we’re more familiar with in planets and stars and gas and dust, adds up to only 5 percent, while the rest is dark matter.

Physicists have come up with a variety of dark energy candidates -- and have even considered modifying the laws of gravity as part of the effort. Einstein proposed something he called a cosmological constant as part of his general relativity theory to balance the effects of gravity. He later regretted the idea, but a century afterward, cosmologists have embraced it. In this theory, as the universe expands, it releases "vacuum energy," which produces yet more expansion. One tiny problem: the theory’s prediction is a gargantuan mismatch when compared to the actual observed average value of less than one percent of the kinetic energy of a flying mosquito for every cubic meter in the universe.

Szapudi and his colleagues make the case that one could avoid the conundrum with a different explanation for the expansion of the universe, without invoking dark energy. They start by splitting up their simulated universe into regions and measuring the density of matter, which is mostly dark matter, in each area. Instead of blowing up the average expansion with dark energy, they measure the density of matter in each mini-universe and say that that drives the expansion there, especially in places devoid of matter. They argue that as gravity pulls together and assembles numerous galaxies in some regions while nearly empty regions everywhere else expand, these regions accelerate the overall expansion, an effect called backreaction. Then when you measure the average expansion, you end up with something that looks very close to the models that use a different method and dark energy to explain the latest astronomical observations.

“That outcome would be wonderful, if it’s right,” said Nick Kaiser, also at the University of Hawaii. He believes that this backreaction approach needs a more solid mathematical foundation, as Szapudi’s study just provides an approximation for the evolution of the universe.

“It’s certainly not the final answer, but it suggests that people should take this seriously,” said Rocky Kolb, a cosmologist at the University of Chicago. He also points out the troubling discrepancy between measurements of the expansion rate from cosmic microwave background radiation, relics of the Big Bang probed by the Planck telescope, and observations of supernova explosions. Szapudi’s and his team’s calculations go in the right direction toward resolving that tension.

To settle these questions, Szapudi and other theorists will try to develop more sophisticated simulations, while others are looking forward to getting their hands on more precise observations. Upcoming telescopes within the next decade, such as the European Space Agency’s Euclid space telescope and the Large Synoptic Survey Telescope being built in Chile, will measure the precise distances and motions of millions of galaxies. Astronomers expect that they’ll yield a better and deeper measurement of the expansion rate that could help them distinguish between dark energy and models like Szapudi’s.

“It’s clear that structures [like clusters of galaxies] have an effect on the expansion rate, but what’s not clear yet is how strong the effect is,” said Syksy Räsänen, theoretical physicist at the University of Helsinki in Finland. “Until we’ve established that backreaction doesn’t explain the accelerated expansion, we cannot draw the conclusion that dark energy or modified gravity is needed.”

For now, the jury’s still out on dark energy.