Astrophysicists Probe Expansion Of The Universe 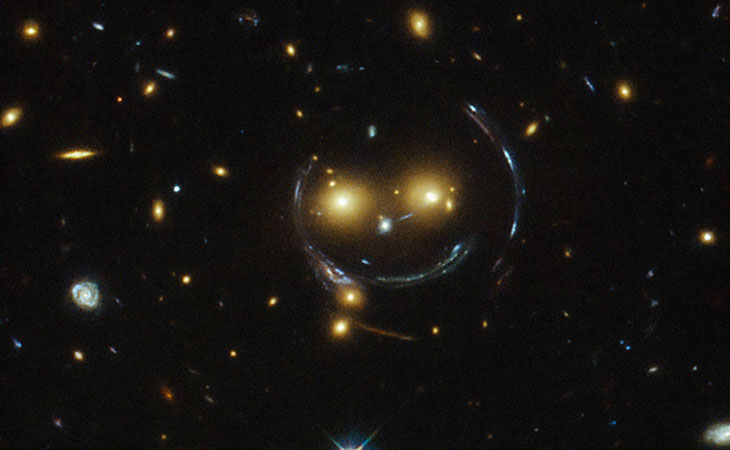 Galaxies distorted by gravitational lensing, as shown in this Hubble Space Telescope image.

(Inside Science) – The universe is teeming with galaxies, but gravity distorts our view of them. Astrophysicists with the ongoing Dark Energy Survey have now collected giant catalogs of the distorted shapes of 24 million distant galaxies, making it possible to probe the underlying structure of the rapidly expanding universe.

Dark Energy Survey scientists investigated the "cosmic web" of galaxies at least as big as the Milky Way — as well as the surrounding hidden clumps of dark matter. They presented their research findings on April 17 at a meeting of the American Physical Society in Salt Lake City.

Dark matter cannot be seen directly, but just as an animal can infer the existence of a predator upon seeing its shadow, astrophysicists infer the distribution of dark matter by detecting its gravitational effects. According to Einstein's relativity theory, a massive object can warp the fabric of space-time, bending the light rays emanating from background galaxies and magnifying and stretching their images around them.

There is between five and six times as much dark matter as regular matter, which includes galaxies, stars, nebulae and planets. But, a web of dark matter clumps fills the universe, implying that the "cosmic lenses" it creates can be found in every direction if you look deep enough. The lensing effects are extremely tiny, but collect enough images and scientists can run statistical studies on them. Astronomers from the survey have done just that. They sifted through millions of gigabytes of data and produced a preliminary map of the locations of 24 million galaxies, indicating which regions are densely packed with galaxies, each containing hundreds of billions of stars.

"I can't describe how amazing this map is," said Michael Troxel, an astrophysicist at the University of Manchester, in the U.K. and member of the collaboration.

Troxel and his colleagues are now at work using this detailed map of distorted galaxies to reconstruct the universe's dark matter scaffolding. In the process, they plan to construct the largest map of the dark matter distribution ever made. They aim to complete the project by the end of 2016.

Their five-year survey, which began in 2013, uses a 570-megapixel camera mounted on the Blanco 4-meter telescope in the mountains of northern Chile. The collaboration includes more than 400 scientists from seven countries. By the end, it will have mapped out one-eighth of the entire night sky.

In addition to studying the distribution of galaxies, Troxel and his colleagues also compared their map with measurements of the radiation left behind by the Big Bang, called the cosmic microwave background, which is measured by the South Pole Telescope and the Planck satellite. This allows the scientists to examine the connections between the early universe and the galaxies they see today.

In particular, they seek to measure the universe's expansion rate as precisely as possible. True to its name, the Dark Energy Survey is being used to determine how mysterious "dark energy" is accelerating that expansion. So far, Troxel said, their findings are consistent with those of other astrophysicists obtained with Planck.

But they're still concerned about uncertainties that could bias their conclusions. "We don't control the weather or the atmosphere," said New York University astrophysicist Boris Leistedt, another collaboration member. It's critical to control for these effects and make sure our data aren't affected by them, he said.

Gupta studies not galaxies but supernovae, the explosions of dying stars, which the sensitive survey's camera also pick up. Since they understand how bright these explosions should look, every time they see a supernova go off, they can estimate how far away it is, and this gives them another probe of the expanding universe. Gupta and his team have recently observed dozens of "super-luminous" supernovae, up to 100 times brighter than the more common variety. They can be seen tens of millions of light-years away, and he hopes to use them to examine the expanding universe even deeper in its past.

"Their ongoing challenge will be to calibrate their measurements and reduce their systematic uncertainties," said Shirley Ho, a Carnegie Mellon University astrophysicist not affiliated with the collaboration. She looks forward to the publication of the survey's large first-year data set and map, "which will be exciting for us to work with," she said. "The Dark Energy Survey scientists are among the first to constrain cosmology by correlating their gravitational lensing with the cosmic microwave background. That's really cool," Ho added.