Bacteria engineered to glow green are helping to show how damage from aging is passed down through generations.
Image 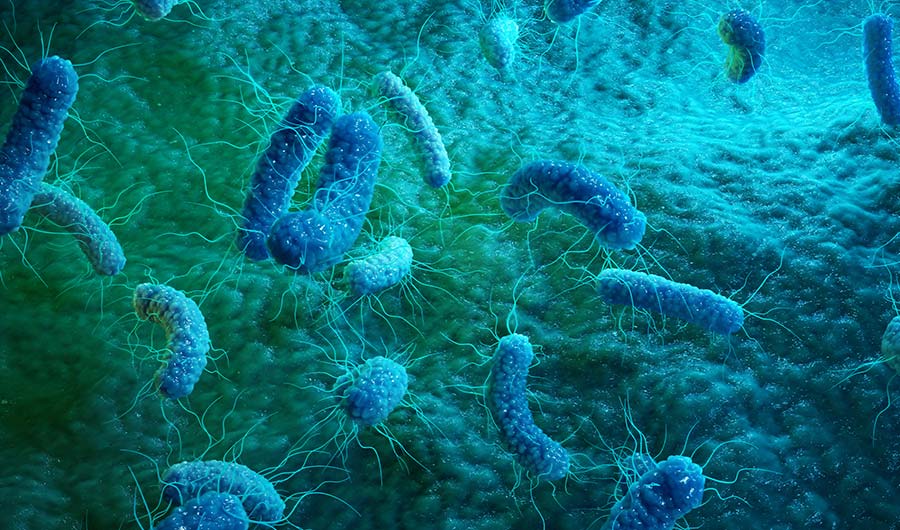 (Inside Science) -- When bacteria reproduce, they divide into two equal daughters. At least, that's the traditional view. For decades, differences between the two daughter cells were put down to random chance.

In fact, research over the past 15 years has revealed that each division of an Escherichia coli bacterium produces one "old daughter" who gets most of the age-related damage, and one "new daughter" who gets a relatively fresh start. Camilla Rang, an evolutionary microbiologist at the University of California, San Diego, views the old daughter as the remnant of the mother cell -- a being that is in one sense sacrificing herself for her youthful offspring.

Of course, Rang isn't saying that bacteria make conscious decisions or experience maternal emotions. But the differences between the daughters appear to be systematic, and they may result in more progeny for the mother in the long run. Rang and her colleagues have been studying this process for years, and their new paper in the journal Proceedings of the Royal Society B reveals new details of how it works.

E. coli are shaped like rods with rounded ends called poles. When they divide, each daughter gets one old pole that used to be on the end of the mother cell, and one new pole that forms where the mother cell splits down the middle. 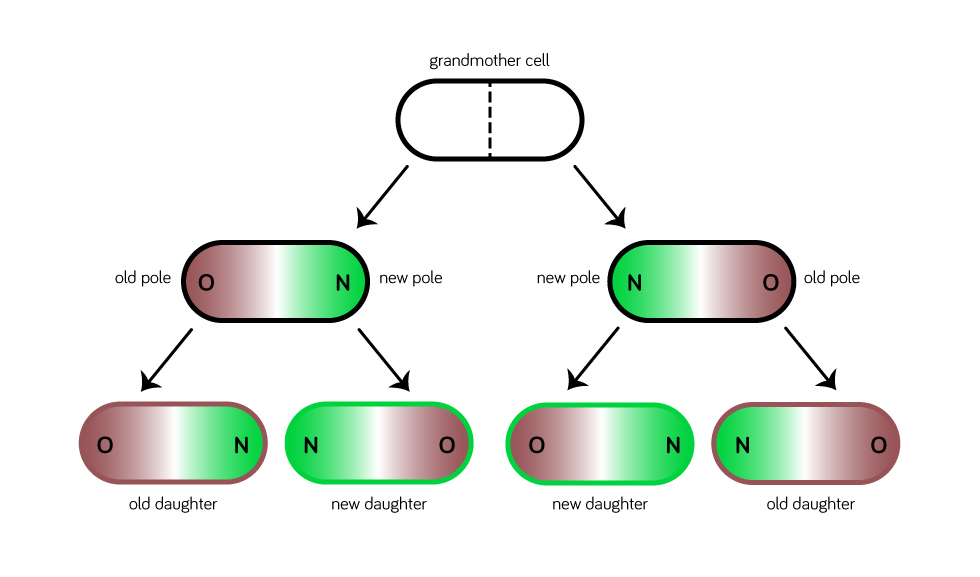 Diagram showing how old poles from the outside of a mother cell are passed down through generations.

Credits: Abigail Malate, staff illustrator. Based on a diagram in "Allocation of gene products to daughter cells is determined by the age of the mother in single Escherichia coli cells," published in Proceedings of the Royal Society B.

Over time, some of a cell's proteins are damaged by oxidative stress. As a result, they fold into the wrong shapes and stick together in clumps. These damaged proteins tend to be more concentrated in the cell's old pole. Past research has shown that old daughters receive about 63% of the mother cell's damaged proteins.

If you trace the original oldest pole down through the generations, each cell that receives it tends to grow more slowly than the one that had it before. You can think of the old pole as belonging to a single old cell that gives birth to new daughter after new daughter. No one has yet proven that damaged proteins cause the slow growth rates, but the two tend to go together, noted Ariel Lindner, a systems and synthetic biologist at INSERM, the French National Institute of Medical Research, and the Center of Research Interdisciplinary at the University of Paris. Lindner was not involved in the new study, but his team conducted much of the early work in the field.

If the old mother cell is raised in a bacteria's paradise with lots of food and no toxins, she reaches an equilibrium after several generations, and she no longer grows more slowly each time she divides. But eventually, the old cell will die. In groups of such old cells, the death rates continue to increase over time, suggesting that aging damage continues to snowball down the family tree.

To better understand why the new daughters grow faster, the researchers engineered E. coli cells to produce a protein that shines fluorescent green when exposed to light. New daughters shone brighter than old daughters, indicating either that they were producing more of the fluorescent proteins, or that they received more from their mothers. Proteins are the major building blocks of cells, so the findings suggest that new daughters are richer in materials needed for growth.

Both Rang's and Lindner's teams had seen this pattern years earlier, but they couldn't demonstrate it conclusively until Rang's graduate student Chao Shi developed a way to track the output of fluorescent light from individual cells.

Why do mother E. coli cells give one daughter more advantages than the other? According to Lindner, it might be a side effect of the size and structure of the bacteria. Damaged proteins naturally clump together into large balls that can't easily diffuse through the tight confines an E. coli cell, so they tend to build up in the old pole. In larger cells such as yeast, you would need an active transport mechanism to move the damaged proteins. "In E. coli, it turns out that you do not need such a system. Physics gives it to you for free," said Lindner.

Still, if such asymmetry were harmful to the cells, they likely would have evolved a way to change it, said Lindner. Mathematical models have suggested that dividing the damage unequally could increase the colony's total growth.

To explain why, Rang uses a banking analogy. Imagine investing $1,000 at an interest rate of 8%, or $500 at 6% and $500 at 10%. Splitting the investment into two accounts with different interest rates leaves you richer as the interest compounds over time -- just as splitting the advantages of youth unevenly between two daughters eventually yields more progeny.

Once, scientists believed E. coli were immune to aging, reborn fresh at each cell division, said Rang. Now, they know that's not true. The new study helps show how mother bacteria carry the burden of age across generations -- findings that hint at the universal toll of time.

"If you think of bacteria almost like our first living organism on Earth," said Rang, "they do age. Which means that aging is [probably] as old as life itself."