Researchers have long pondered the humble egg. As some great puzzles are cracked open, new ones are laid. 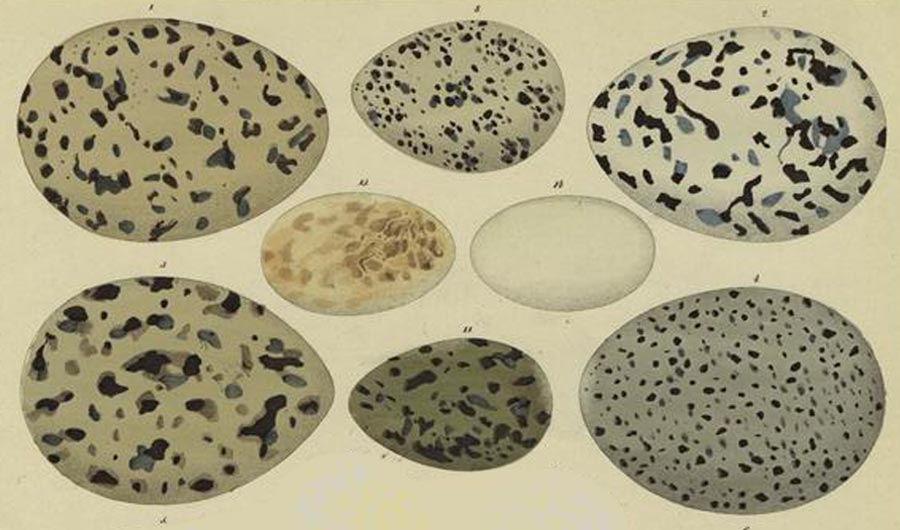 (Inside Science) -- Bird eggs have an immense diversity in shape. Scientists have long wondered what exactly drives this rich assortment. One theory was that eggs had specific shapes because of the precarious places they were laid.

Last year, researchers posited a broad evolutionary idea: Egg shape had more to do with a bird’s flight ability than where they nested. Now, another research paper zooms into the idea that specific eggs are laid in shapes that help them avoid rolling.

The new paper, accepted to the Journal of Experimental Biology, looked at eggs from murres, seabirds that lay teardrop-shaped eggs, without nests, on rocky cliffs in northern latitudes near the North Pole.

“The original, textbook explanation of their pear shape was that it confines the rolling to a tight radius,” explained Mark Hauber, an animal biologist at the University of Illinois at Urbana-Champaign and one of the authors of the new paper. “If a bird accidentally kicks an egg, it won’t fall off the cliff.”

Hauber and his colleague Ian Hayes used a 3D printer to craft dozens of eggs with different shapes, making them rounder or more asymmetrical, and packed them with yolklike silicone. The researchers rolled the eggs on an unfinished wooden table that could be adjusted to different angles while tracking the motion with software.

They found that longer eggs and less symmetrical eggs rolled in a larger radius, while increased conicality (the pointed end of the egg geometrically mimicking a cone) decreased rolling. That shows the adaptive value of the rare pear-shaped eggs that murres lay, Hauber said. “The urban legend of what murre eggs do is correct -- they do roll in a very tight radius and much more so than any other egg shape studied.”

Tim Birkhead, an ornithologist at the U.K.'s University of Sheffield, said he finds the research genius in its simplicity -- but that it’s also incomplete. “It has been shown that model eggs don’t behave as real eggs do,” said Birkhead. “A real egg -- when fresh -- is full of fresh yolk and albumin. It’s a dynamic fluid system.” As the animal inside the egg develops, the egg will also roll differently.

Cassie Stoddard sees the diversity of egg shapes from a flight-based lens. Stoddard, an evolutionary biologist at Princeton University in New Jersey, published an analysis of 50,000 eggs cross-checked with 1,400 bird species in the journal Science last year.

She found that a bird’s ability to fly -- not where it nested or its diet or how many eggs it laid in a single nest -- was the best predictor of egg shape. Strong fliers were more likely to lay asymmetric or elliptical eggs, while lousy fliers (think of chickens) were more likely to lay oval eggs. “Birds have evolved streamlined, sleek bodies for flight and this has influenced the egg shaping process," explained Stoddard.

Still, this broad hypothesis isn’t necessarily at odds with local oddballs like the murres. If you want to try to explain egg shape variation across all birds, looking at flight ability is a good place to start, said Stoddard. “But when you zoom in on a particular bird family or species, there can be exceptions to this rule."

She said that Hauber’s discovery that highly conical eggs are less likely to budge adds richness to our understanding of the factors that determine the shape of murre eggs.

Understanding eggs can also offer a peek into the deep past of creatures on Earth.

“The egg is one of the most important evolutionary innovations that allowed terrestrial vertebrates to diversify into many habitats," Stoddard said. In order to flourish and reproduce away from water, early amniotes (predecessors of mammals, reptiles and birds) had to evolve waterproof eggs and shells that would allow them to lay eggs anywhere. So specialized eggs are closely tied with the history of land vertebrates -- without them, she said, life as we know it on Earth wouldn’t exist.

In addition, insights into egg shape and structure can help the poultry industry avoid outbreaks of foodborne illnesses such as salmonella, which can exist in eggs.

There are still many questions to crack in the study of egg shape. Hauber wonders about how the surface of the egg influences the ability for gas exchanges, and how egg shape can affect infection by microbes. Stoddard is intrigued by how egg shape may have changed as dinosaurs took to flight. She also wants to understand more about the mechanics of shaping eggs inside a bird’s body. Part of that has to do with the stretchy membrane inside the egg.

It’s also a gateway science, pulling in anyone who makes a morning scramble. "Everyone can relate to how unusual and variable eggs are even though they’re commonplace,” Stoddard said. “It's a great example of how curiosity-driven science can lead to interesting evolutionary insights."