Birds Of A Feather Flock Like A Magnetic System

Some scientists look into the sky for stars; others look for starlings.
Image 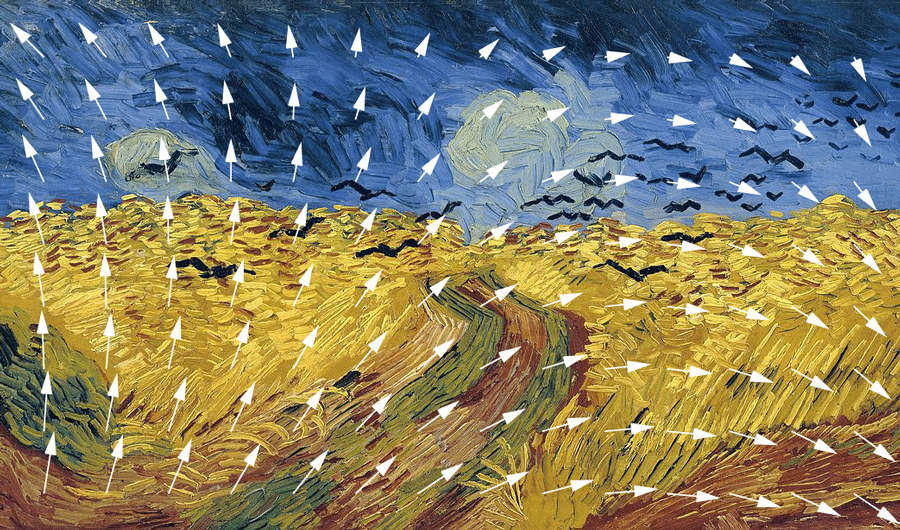 Based on Vincent van Gogh's Wheatfield with Crows and image by Wikimedia user Sbyrnes321 (CC0 1.0)

(Inside Science) -- An interdisciplinary team of physicists, biologists and biophysicists has developed a model that can imitate the mesmerizing patterns of starling flocks. By drawing an unlikely parallel between starling flocks and magnetic systems, the scientists were able to describe this vastly complicated biological system using only a few physical equations.

All sciences can be boiled down to the observation and prediction of patterns. Sometimes patterns that seem totally unrelated resemble each other in some way, like human eyes and nebulae, or hurricanes and galaxies. Sometimes these things have nothing in common except the associations we contrive, but sometimes they actually do. For example, fractal patterns, which can be found in tree roots, river branches and lightning strikes, all share a similar appearance and can also be represented by a common physical principle.

"The difficult thing is figuring out how to do a proper study to test the extent of these analogies," said Frederic Bartumeus, an expert in movement ecology from the Centre for Advanced Studies of Blanes in Spain. "To see how accurate one can describe a biological system using concepts from statistical physics for example."

This is exactly what the scientists from École Normale Supérieure in France and Institute for Complex Systems in Italy have done. In their recent paper published in Nature Physics in August, a team led by physicist Thierry Mora has successfully modeled how starling flocks behave by modifying existing theories on magnetic systems.

The overlaid white arrows illustrate how changes ripple through a lattice of magnetic dipoles. Mora's team developed a similar but much more sophisticated 3-D mathematical model to describe the starling flocks.

Composite image based on gif and background image courtesy of Jonathan Flynn and Thierry Mora.

A flock of tiny little magnets

Largely driven by the demand for better computing and data storage devices, for decades physicists have studied how to manipulate magnetic materials for practical uses. But physicists being physicists, it is not enough just to know how; they also needed to know why.

They have learned that inside a ferromagnet -- like a fridge magnet -- there are billions and trillions of individual magnetic dipoles. Each dipole is itself essentially a tiny magnet, and they all have to line up for the big magnet to work. So the physicists developed and tested models and theories on what happens at microscopic scales inside magnets -- how individual dipoles behave, how each of them interacts with their neighbors and how these interactions between these tiny magnets affect the big magnet.

Similar to a magnetic dipole, an individual starling adjusts itself depending on its neighbors. While there have been other parallel efforts that have investigated flocking starlings, Mora's team has taken a different approach to the problem -- by studying the flocks using theories originally intended for magnetic systems.

By carefully modifying theories of magnetic dipole interactions, they were able to develop a model that can accurately describe the behavior of flocking starlings.

Essentially the model simulates the interactions between neighboring individuals within the group. It not only predicts the movements of individual starlings, but more importantly the time it takes for an individual's adjustment to affect the movement of the entire flock.

"People have also looked into collective motion at a cellular scale, for example in biological studies like tissue repairs," said Mora. "The same class of models have been proposed to describe those motions, … basically any system where agents move by themselves."

A better understanding of collective systems in general can have an impact on a broad range of subjects, from crowd control to bacteria growth and even the design of future self-propelled medical nanobots.

"Of course there will be some conditions for what kind of system this model can be applied," said Bartumeus,"but to have any kind of transferrable knowledge among different biological systems, that's already magic for a biologist."

Bird flocks and magnetic systems have been studied before, but mostly by biologists and physicists working in different buildings. Now we know that the two share something in common, and from this, new connections may emerge.

"Sometimes it's difficult to find physicists who are willing to study biology, or biologists who are interested in physics," said Bartumeus. "There's a pool of theories in physics that can be used to describe collective motion in biology, and this research has just opened another door."

Editors' Note (9/24/2016): This piece has been edited to correct the official affiliations of the researchers. We regret the errors.