Cowbirds outsource parenting to other species, but an innate password tells their children to copy cowbird songs.
Image 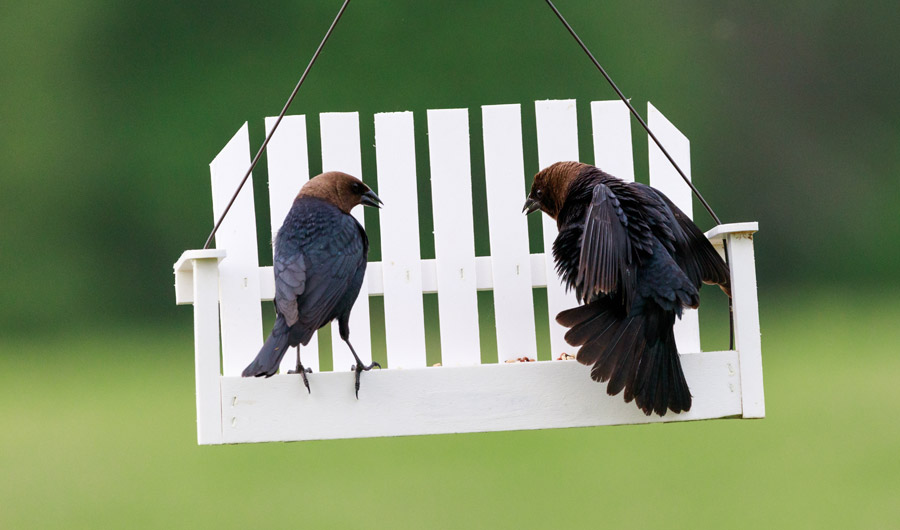 (Inside Science) -- Most songbirds learn to sing by copying songs they hear around them. But young brown-headed cowbirds face a problem: they aren't raised by their own kind. Female cowbirds lay their eggs in the nests of more than 100 different kinds of birds, foisting the work of chick-rearing onto unwitting foster-parents.

Now, a new paper describes how the cowbird chicks may learn to recognize and sing their own species’ songs.

"We kind of opened the paper with this existential question," said Sarah London, a neuroscientist at the University of Chicago. "How do you know who you are if no one's shown you who you are?"

London and her colleagues, including Matthew Louder of the University of Tokyo and Mark Hauber of the University of Illinois at Urbana-Champaign, found that part of the answer appears to be a "password" -- a simple call that the birds know innately. This password activates learning mechanisms in young cowbirds' brains, prompting them to remember other vocalizations they hear at the same time.

Males raised in isolation will develop something that resembles a cowbird song, but with important differences. In the wild, young males change their developing songs to match the songs of other cowbirds in their vicinity, leading to regional differences or "accents." 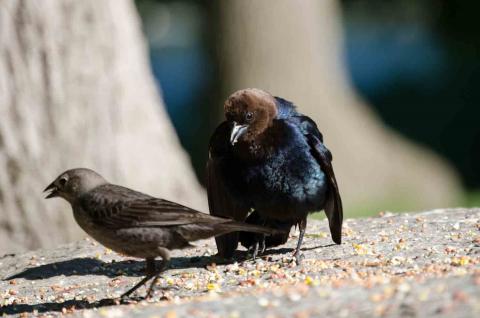 The Sexiness of Clueless Males

Male cowbirds raised without access to other birds develop their own peculiar version of a cowbird song. Strangely, females love these untutored songs, showing twice as much sexual interest as they do for the songs of normal males from their own population, according to research in the 1970s and '80s by Meredith West and Andrew King. And it's not just a matter of females liking novelty, because female cowbirds don't like the accents of wild males from distant locations. Instead, the naive males' songs seem to have particular acoustic features that make them attractive.

But in cowbird society, it's not enough merely to be attractive to females. A male also has to earn social dominance and acceptance. When King and West placed formerly isolated males in aviaries with wild-caught cowbirds, the wild males attacked and often killed the naive males as soon as they tried to sing.

"These [isolated] males could put any female into a copulation solicitation display with their song," said White, who has studied cowbirds with King and West. "[But] males respond really aggressively to a really good song, and these poor little guys get beaten up by the other males and they never actually get to reproduce."

This apparent paradox makes sense when you realize that in cowbird groups, dominant males sing more attractive songs than males ranked lower on the pecking order. When these dominant males are moved into new groups where they no longer hold high rank, they are often attacked and killed. White believes that for females, the songs serve as an honest signal of mate quality, since only high-ranking males can get away with singing attractive songs. The best song for a male to sing depends on the expectations of other males in his population, so it's important for him to be able to learn from the right birds.

Females don't sing, but they have a simple "chatter call" that develops normally regardless of what a female hears growing up. They use it in a variety of contexts, including immediately after hearing a song they like. Because the chatter call is innate and is often paired with songs, the researchers suspected it might function as a password to help young cowbirds learn.

To test how chatter calls affect song learning, Louder and his team collected baby cowbirds from their hosts' nests and raised them by hand. When the male nestlings were 70-80 days old -- old enough that they would likely have joined flocks of other cowbirds if they were in the wild -- the researchers began playing them pairs of vocalizations: first a song, then a chatter call.

Instead of using recordings of cowbird songs, the researchers trained the birds on canary songs. This allowed them to isolate the effect of a recorded cowbird chatter call without worrying about any other instincts a cowbird song might trigger. As a control, they exposed other young males to a canary song followed by a mourning dove's coo.

"It doesn’t sound like a canary. No canary would be fooled. But the chatter call is definitely doing something," said Louder. "It looked to us and sounded to us like they were trying to mimic the canary song."

Next, the researchers examined which genes were active in the birds' auditory forebrains, the part of the brain responsible for processing and learning songs. Compared to the cowbirds trained with mourning dove coos, the birds trained with chatter calls showed increased activity in genes associated with neural plasticity. This suggests the chatter calls helped shift the birds' brains into a malleable state that allowed them to learn, said Louder.

Finally, the researchers turned their attention to females. Female cowbirds may not need to sing, but they still have to learn which songs belong to desirable mates of their own species. Unlike the previous experiments where males were trained with either a dove coo or a chatter call, each female was trained with two different canary songs, one that was always paired with a chatter call and one was always paired with a mourning dove coo.

Right before testing the females' brains, the researchers played them one last song -- either the one previously paired with the chatter call, or the one that had been paired with the dove coo. Then, they looked for activity in a set of genes associated with novel experiences.

The gene expression analysis suggested that even though the females had heard both canary songs many times, they only learned to recognize the song that was paired with chatter calls during training, said Louder. The findings were published today in the journal Current Biology.

"I think that it's a really great paper," said Stephen Nowicki, a biologist at Duke University in Durham, North Carolina, who was not involved in the research but co-authored a commentary article about it in the same journal. "It's really pretty convincing evidence that this sound, the chatter, is acting as a password."

David White, an animal behaviorist at Wilfrid Laurier University in Canada, said he was initially skeptical of the password hypothesis when Hauber first proposed it nearly two decades ago. But he said the new study, combined with some of White's own findings on the importance of the chatter call, has finally persuaded him that Hauber was right.

While the study only examined the chatter call in the context of song learning, Louder suspects it might serve as a more general cue for species recognition, helping young birds to find other cowbirds after leaving the nest. A similar mechanism could also be at play in many different species, said Louder. Most animals are raised by their own kind, but they could still benefit from cues that help them figure out what to learn. There are hints that a whistled note at the start of the golden-crowned sparrow's song may serve a password-like function. And passwords don't necessarily have to be song-related. They could be something an animal sees or feels, and they could shape virtually any learned behavior.

"It explains a big thing that's bothered people for a while about cowbirds," said Louder. But, he said, "I don't think it's just a cowbird thing."