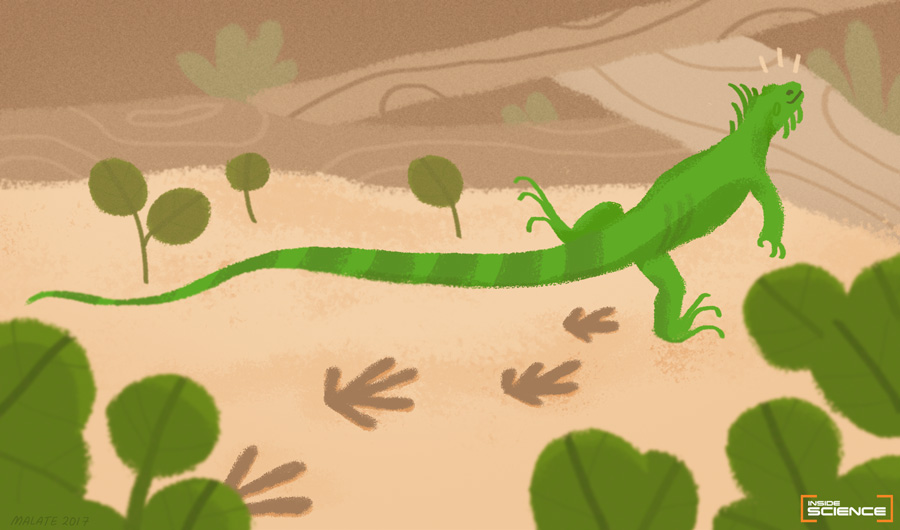 (Inside Science) -- Lizards can be quick. With all four limbs spinning faster than the eye can see, they dart across the landscape, eluding predators and hunting prey. When some lizards kick it into high gear, their powerful, extra-long hind legs take over. They become, for the moment, bipedal.

More than 50 lizard species can run on two legs. Perhaps the most famous is the basilisk lizard, whose two-legged scamper can propel it across water -- earning it the nickname "the Jesus Christ lizard."

But bipedal lizards may be much more ancient than biblical times. A new analysis of fossilized lizard tracks in South Korea shows that lizards ran on two legs as long as 110 million years ago --more than 100 million years before humans walked upright.

"Some modern lizards can run bipedally, but we did not know when they developed that ability until this discovery," said Yuong-Nam Lee, a paleontologist at Seoul National University in South Korea, in an email.

The fossils, described today in the journal Scientific Reports, are the oldest known lizard tracks in the world. They show four sets of tiny footprints -- most from the lizards' two back feet. The strides were long and lengthened while the width of the tracks narrowed. Those patterns, combined with the orientation of the prints and the fact that the toes left the strongest impressions, suggest that the lizard was running on only its hind legs. "I became convinced that these tracks showed bipedal running," Lee said.

The tracks were made by lizards that the researchers have called Sauripes hadongensis, which may have been an ancestor of today's iguanas and chameleons. And this particular lizard might have been fleeing for its life. A pterosaur -- a flying, reptilian cousin of dinosaurs that might've enjoyed a lizard snack -- left tracks nearby. A bipedal sprint, which often induces a near-upright posture with better visibility, would've been a matter of evolutionary survival.