BRIEF: Are We There Yet? Wolf Spiders Use Their Eyes as Odometers

Their eight eyes take on different tasks to assist in navigation.
Image 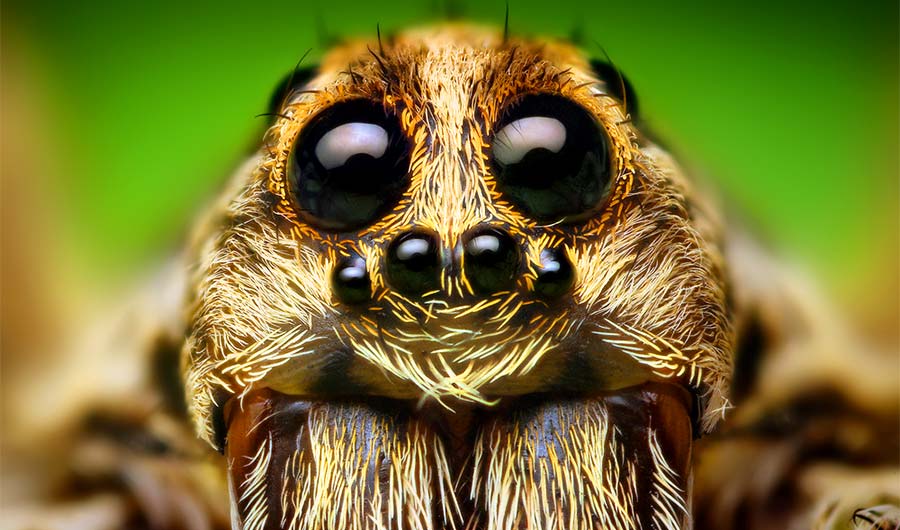 Picture of a wolf spider. Please note the four eyes in the center of the photo, with two large eyes above, and the two eyes above that, on the back of the head.

(Inside Science) -- Outside its underground home, the wolf spider waits. The ambushing arachnid hides behind a structure of twigs, leaves and small rocks -- all stitched together with spider silk and built over the entrance. When prey scurries by, the spider gives chase and goes in for the kill.

But before it devours dinner, it must carry its meal home. The spider's pursuit may have led it more than a foot away, and to find its way back, it uses its set of eight eyes as both a compass and an odometer, tracking direction and distance.

Four of its eyes sit in a row, below two bigger ones. The remaining two are on the side of its head.

During the chase, the spider's eyes in the middle of that bottom row (the anterior median eyes) keep track of polarized sunlight -- enabling it to maintain orientation. Meanwhile, some combination of its six other eyes gauge how far it travels. But it's been a mystery as to what extent those three pairs of eyes do the job.

To find out, researchers at the University Autónoma in Madrid trained wolf spiders to scramble down a track. Then, they used black paint to cover different pairs of eyes and measured how well the semi-blinded spiders were able to return home. To identify where the eyes look to gather distance information, the track was lined with stripes either along the ground or on the walls.

Although the experiments show that all the eyes -- other than the anterior median ones used for tracking sunlight -- help the spider track distance, the two at the outside of the bottom row, known as the anterior lateral eyes, seem to be the most important. When those eyes were covered -- and when the scientists placed stripes on the ground -- the spiders stopped short of their homes by about 24 percent. The spiders also came up short by about 12 percent when its bigger, posterior median eyes were covered -- again when stripes were on the ground.

The experiments, published today in the Journal of Experimental Biology, suggest that wolf spiders know how far they've traveled by watching the ground mainly with their anterior lateral and posterior median eyes. For these spiders, at least, distance is in the eyes of the beholder.