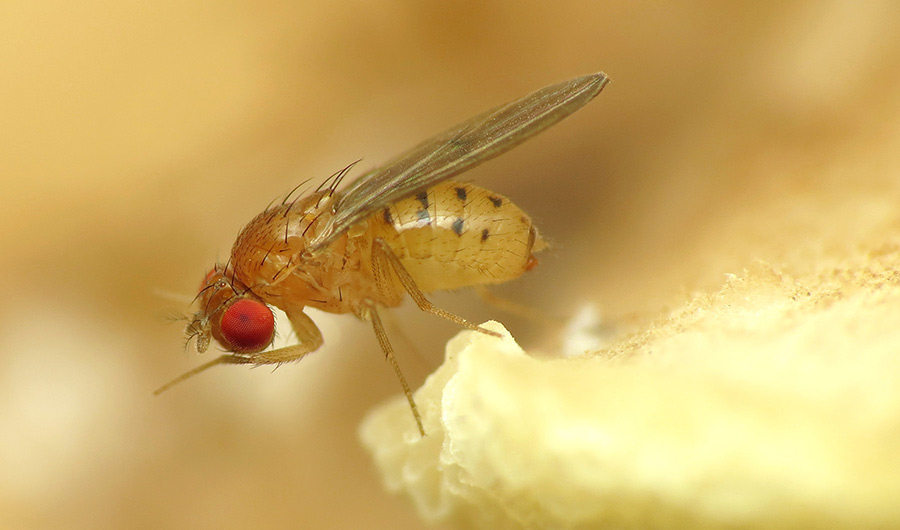 (Inside Science) -- The microbes inhabiting a fruit fly’s gut may shape its food preferences, potentially steering the fly to eat the same kind of microbes it hosts, according to a new study published online July 27 in the journal Current Biology.

Researchers from the University of Sydney’s Charles Perkins Centre and the School of Life and Environmental Sciences in Australia analyzed the feeding habits of flies with normal gut microbiota, flies colonized by only one kind of bacteria, and flies with no gut microbes whatsoever.

The researchers placed the hungry flies in an arena containing seven yeast-sucrose food stations: one seeded with a microbe that lives on the fly’s exterior, one without any microbiota and five that were each seeded with a different kind of fly gut microbe. Then, they recorded the proportion of flies foraging at each station every three minutes over the course of an hour.

Flies with normal microbiota spent more time at the five stations with common fly gut microbes than would be expected by chance. Flies associated with only one type of bacteria consumed food containing that microbe and other closely related bacteria for the longest time, devoting less time to other kinds of bacteria that are normally common in fly guts.

On the other hand, flies without microbiota exhibited different preferences. They gave more attention to the unseeded food station, and even avoided Acebactor pomorum, one of the most common species of bacteria found in flies.

The researchers also examined how microbes influenced nutritional feeding behavior. Conventionally, flies favor diets with twice as much carbohydrate as protein. However, the flies in the study spent just as much time eating nutritionally suboptimal food with beneficial microbes as they did eating more nutritious food with no microbes.

The authors of the study suggest that flies' gut microbes may release molecules that influence brain activity, a phenomenon that’s been observed in small mammals. The results may raise new questions regarding how and why animals evolve to forage for and recognize microbes.