BRIEF: Migraines May be a Side Effect of Adapting to the Cold

BRIEF: Migraines May be a Side Effect of Adapting to the Cold

A genetic variant linked to cold sensation and migraine headaches may have helped people survive in northern climates. 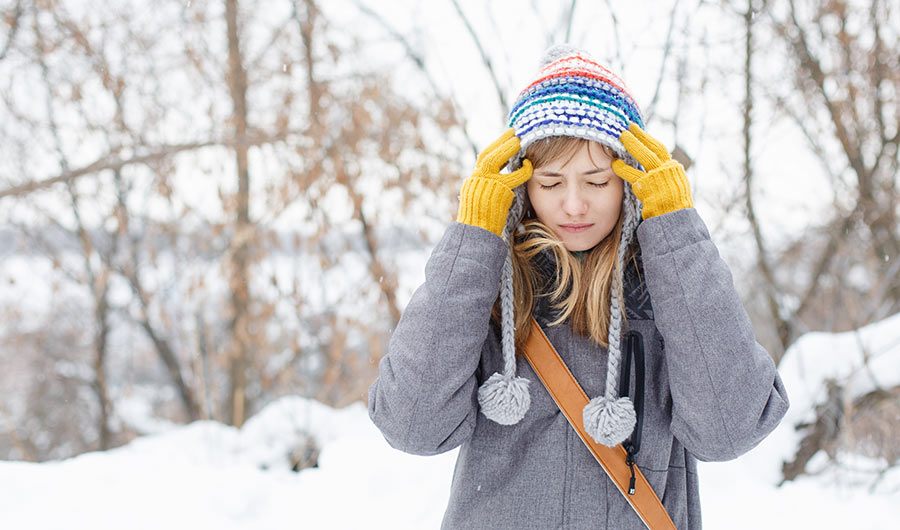 (Inside Science) -- Migraine headaches might be the price some people pay for their ancestors' ability to survive the cold, according to new research.

The study, published today in the journal PLOS Genetics, focused on DNA located a little upstream of a gene called TRPM8. TRPM8 codes for a receptor protein that lets you feel cold sensations, whether from a breeze against your skin or the menthol in a breath mint. The upstream DNA sequence is thought to regulate when and how this cold-sensing gene is expressed.

There are two versions of the upstream sequence in question, and past research has shown that one of them is more likely to be found in people who get migraine headaches. The researchers wondered whether this variation might reflect evolutionary adaptations to different climates. To find out, they analyzed genetic data from more than 1,200 modern people around the world, as well as from 79 ancient people who lived between 3,000 and 8,500 years ago.

According to the analysis, both genetic variants originated long ago in Africa. But the variant associated with migraines was favored at higher latitudes, causing it to spread through northern populations. Today, the researchers found, that variant makes up about 88 percent of the upstream DNA sequences among Finnish people, but just 5 percent among Nigerians.

"It helps us better understand human adaptation to the different environments we inhabit," wrote senior author Aida Andres in an email. Now a population geneticist at University College London, Andres conducted most of the study while at the Max Planck Institute for Evolutionary Anthropology in Leipzig, Germany. She added that the DNA sequence she studied is one of many factors that together determine whether people suffer from migraine headaches.

It's not yet clear exactly how the two genetic variants affect the body, either for cold sensation or migraines. But the findings could help explain why migraines are more common in people of European descent than they are among those with African ancestry, according to the authors. In cold climates, the migraine-prone variant apparently gave people an edge -- even if that edge sometimes felt more like a hammer to the skull.

Researchers Study Violinists To Learn How Humans Act in Synchrony
Alligators May Be Able to Survive Venomous Snake Bites
New Theory Says We’ve Been Wrong About How Bubbles Pop
Crustacean Genes May Solve Debate Over How Insects Evolved to Fly
Some Beetles Survive Being Eaten, New Study Finds
END_OF_DOCUMENT_TOKEN_TO_BE_REPLACED

COVID-19 Vaccine, Sharks and Mezcal
Crabs Use Belly Sounds To Communicate
Touring The Trinity Test Site
Protests, A Retracted Paper, and a Super-Earth Planet
Why Is an Empty Shampoo Bottle So Easy To Knock Over?
END_OF_DOCUMENT_TOKEN_TO_BE_REPLACED