Robotic bugs may someday help in search and rescue.
Image 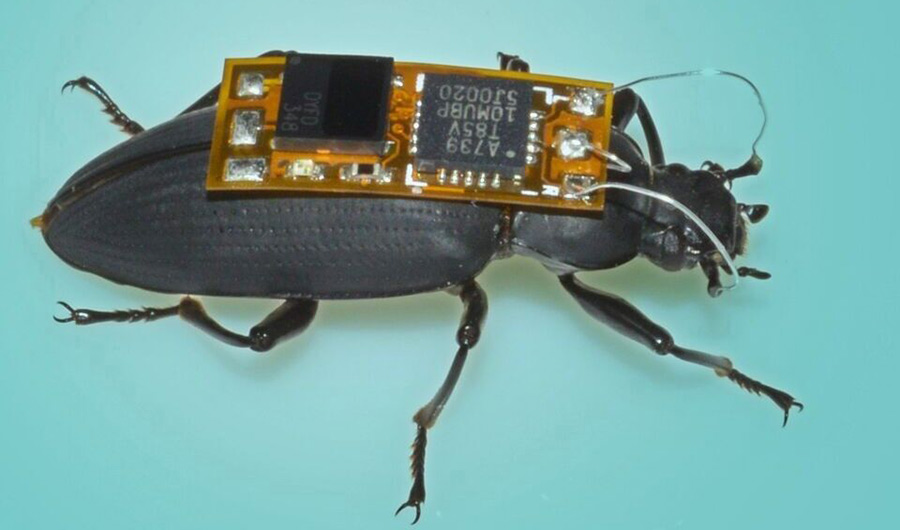 (Inside Science) -- This is no ordinary beetle. There's an electronic chip attached to its back, and that chip connects to the bug's antennae, firing electrical signals that steer the beetle left, right and backward. It's part insect, part robot, and at less than an inch long, it is the world's tiniest remote-controlled cyborg bug. Someday, robot bugs like it may save your life.

Robotic bugs can crawl through cracks and crannies under rubble, searching for survivors during a disaster. The new cyborg beetle, described in the journal Soft Robotics, is the smallest yet and can be more precisely controlled than previous versions, which could make it particularly adept at search and rescue.

It's certainly not the first cyborg bug. Recently, researchers have attached an electronic backpack onto a giant flower beetle, controlling the bug's gait and flight by sending electrical signals to stimulate its leg and wing muscles. Now some of the same researchers have roboticized the darkling beetle, which is flightless but about half as big.

Instead of stimulating the bug's muscles, the researchers manipulated its antennae -- a simpler approach that bypasses the complexity of an insect's locomotion system. When the researchers electrically stimulate the left antenna, the beetle thinks there's an obstacle and turns right. Stimulating the right antenna steers the bug left. Stimulating both gets the beetle to walk backwards. Increasing the frequency of the signals induces the beetle to make sharper turns.

The researchers showed they can control the beetle with more success and precision than with previous insects, although they don't expect to deploy them in real search-and-rescue operations for at least a decade, said Vo Doan Tat Thang, an engineer at Nanyang Technological University in Singapore, in an email. "Hopefully, in the near future, we can control the cyborg beetle as precisely as any other artificial machine, like a motor."